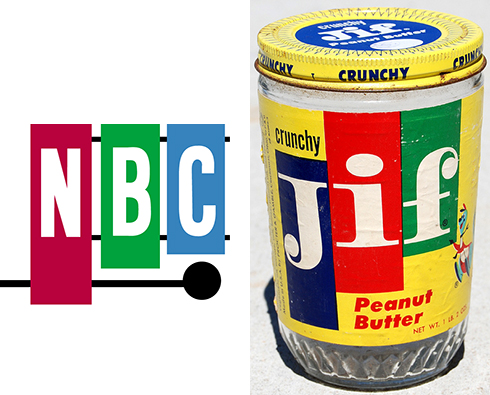 Sometimes it’s the background of a logo that’s multicolored, rather than the type.

Here are two logos that have strikingly similar compositions of red, green and blue rectangles with their 3-letter brand names in knock-out white type. (The photo of Jif Peanut Butter jar above is from RoadsidePictures’s Flickr Photostream.)

Here are both logos in black & white:

There is some indication that the xylophone logo was used at 5:32 PM on December 17, 1953 to announce the Federal Communications Commission’s (FCC) approval of the new color standard, which would go into effect 30 days later.

This Jif label was design by Donald Deskey. (In earlier versions of Jif Peanut butter labels, the font was a little different, the “Jifaroo” kangaroo mascot was bigger, and the colored rectangles were playfully askew.)