As consumers, I think we’re attracted to this kind of duality and bifurcation in packaging design.

With the Nerds Cereal box, although its lid is split into two separately opening parts, the box itself does not appear to have actually been divided. The duality of the product depended mainly on the box’s graphic design and on the fact that it contained two separate inner bags.

This month, Ralston Purina will introduce its sixth “licensed concept” presweetened children’s cereal to major markets across the country. Named Nerds, after the trademarked Nerd candy from Willy Wonka Brands, Itasca, Ill., each box will contain two separate flavors of the presweetened cereal, each in its own compartment with its own opening.

The packaging concept is based on the Nerds candy, which comes in a two compartment box with a different flavor in each. Market test results cited by Ralston Purina state that the candy has achieved a 96 per cent awareness level among children aged six to 13 without national advertising. The two-bag, two-opening cereal box is an industry first, according to the company.

According to an article published in Advertising Age, Ralston Purina is following its past strategy of heavy ad spending during the first six months following the introduction of a licensed cereal product. Since such cereals are tied to children’s fads, their expected shelf life is no more than 18 months. Colors are split down the middle of the front panel of Nerds cereal to denote the two flavors in each box. The flavors are orange/cherry and grape/strawberry.

The product roll-out was also notable for this promotion: a bifurcated cereal bowl with removable “Nerd gate” for mixing…

(More photos and media coverage, after the fold…) 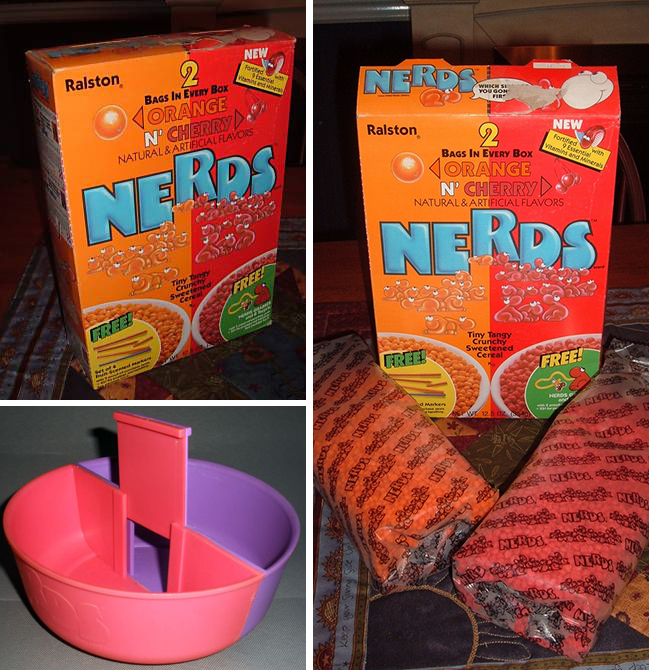 Two magazine pieces (both obviously based on the same press release)…

Contrary to the product’s connotation, Ralston Purina’s Nerds cereal was a champion thanks to the dual, bags-in-the-box printed cereal liner. The two-fold purpose was to offer a choice of more than one highly flavored cereal in one box and encourage the consumer to eat the cereal as a snack.

The objectives of the user, Ralston-Purina were two-fold: offer a choice of more than one highly flavored cereal in one box and encourage the consumer to eat the cereal as a snack. By using HDPE/Nylon substrate developed in house (offering outstanding aroma barrier properties which prevent crossover of flavors and extend shelf life) and by printing the liner (thereby turning a cereal bag into a snack bag), the twin objectives were achieved.