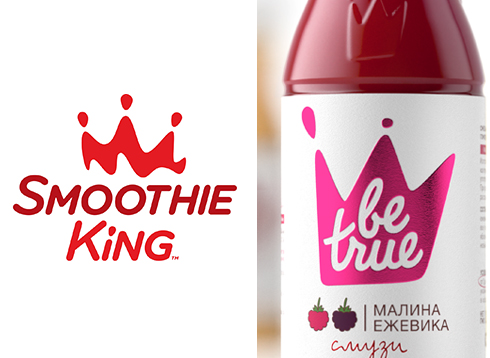 Last summer, the 40 year old franchise, Smoothie King unveiled their new brand logo, designed by WD Partners. The new logo features a symbol that simultaneously resembles both a crown and a splash of smoothie.

This fall, design firm, STUDIOIN unveiled their new brand logo for Russia’s Be True smoothie brand. This logo also features a symbol that simultaneously resembles both a crown and a splash of smoothie.

While these are not the only crown logos one can find that resemble liquid splashes, these are the only two that I know of that were designed specifically for smoothie brands.

(More about it, after the fold…)

Re: the Smoothie King logo…

The big reveal this morning is Smoothie King’s new logo, which they paid “seven figures” to WD Partners, a design and branding firm in Dublin, Ohio, to develop over the past year. After all the focus groups and market research and design iterations—and WD created “hundreds” of different logos for Smoothie King execs to consider—today is the day, and it’s obvious how much is riding on franchisees’ reaction because the build-up is massive.

“Forty years and we’re finally going under the knife, like a middle-aged crisis,” the marketing veep is explaining on stage. They flash dozens of logos on screen, such as Starbucks and Apple and McDonald’s and Jamba Juice, and report consumers’ reaction to those. McCafe “looks like a classier McDonald’s,” according to consumers. Planet Smoothie, “like George Jetson.” Pinkberry screams “desserts, candy, girly, girly, girly.”

Then comes the feedback for Smoothie King’s logo, itself 20 years old: Focus groups said it looks like a fast-food sign for a 1970s-era drive-thru, and then it gets worse. “It looks like a car wash,” many people said in focus groups, or “It looks like a quick-lube express.” The audience groans.

Finally is the ta-da moment. “We’re on the freight train right now in fresh and healthy and companies are scrambling to get on board. The globe is changing,” the executive enthuses. And the new logo appears: Red, with three splashes that evoke the Smoothie King crown, or a community of people joining their hands together, or fresh strawberries like in their smoothies, whatever the viewer prefers.

Re: the Be True logo…

“We rebranded smoothies BE TRUE.

The main message of the brand — to be honest and real — is embodied in the new symbol — the crown formed by splash smoothies. Trademark embossed foil on textured paper, which emphasizes the privilege brand. Occurring edge labels form a fruit tree design complements important infographics.

Not cheap, but very tasty and healthy product has become more mature and ambitious. No trace of borrowing design world analogues. The new bottle got a modern and ergonomic shape that highlights the product its own personality.”

One particularly impressive detail at the back of their label: a fruit tree is formed by the negative space in the gap between the ends of the label. (See also: Meaningful Die Cut Windows) 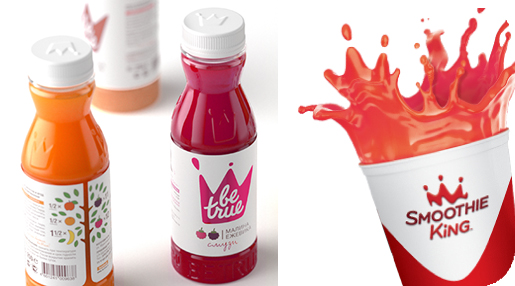 « Vance Jonson: packaging design for Hap Pet Foods
The Tilt Bottle: who gets credit for a design? »