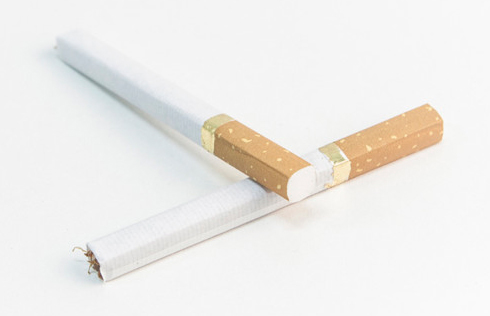 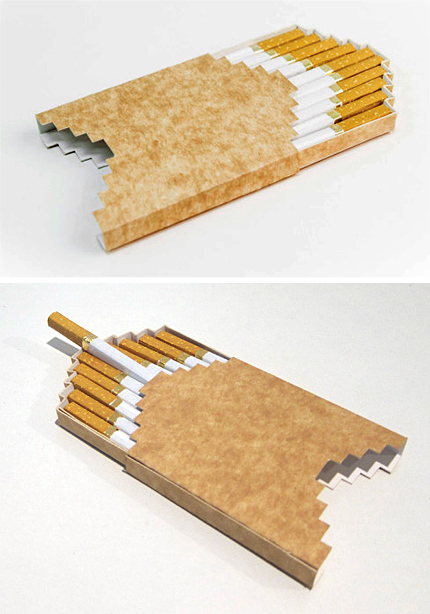 The square cigarettes above are one of a number of new products now for sale on Annika Pettersson, Adam Grinovich & Charles Mathis’s online store: Critical+.

€100 buys you a box of 10 “designer” cigarettes that Current Obsession magazine describes as:

While I, personally, do not concur about the awesomeness of the cascading pack, Critical+ gets props for actually bringing a square cigarette to market.

This is an idea that big tobacco companies have dithered with for over a century, but somehow never managed to turn into an actual product. 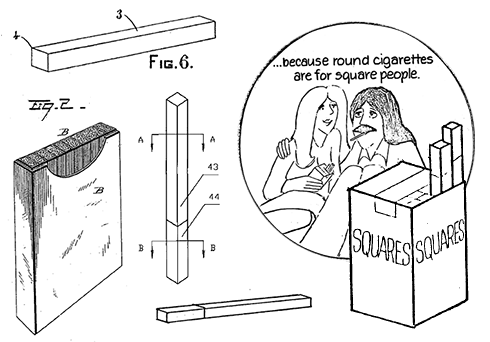 Why should cigarettes be square? In some circles, “square” is a slang term for cigarette, apparently because they generally come in rectangular packages. “Square pressed” cigars have been a thing for a long time, so why not also cigarettes?

Below, we follow the paper trail of this idea, in an exhaustive and, well, exhausting collection of internal memos, patents and unrealized advertising campaigns.

(Read all about it, after the fold…)

1880s: Last year we looked at 3 patents for “square cigarettes,” the earliest dating back to 1931. The idea of square cigarettes, however, goes back (at least) as far as 1880 when B. Morris and Sons provisionally registered a “useful design” patent for “A Square Pressed Cigarette.” 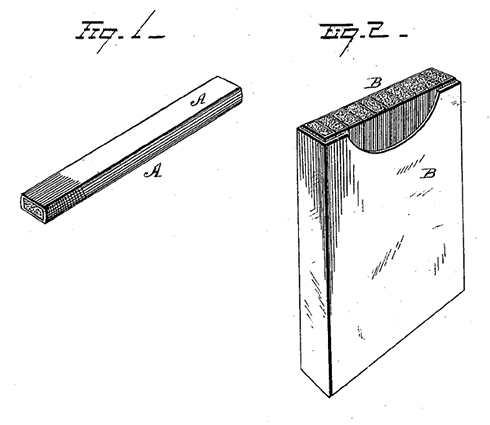 1930s: Skip ahead 50 years to the 1934 patents of W.E. Molins for square cigarettes and the machinery to make them… 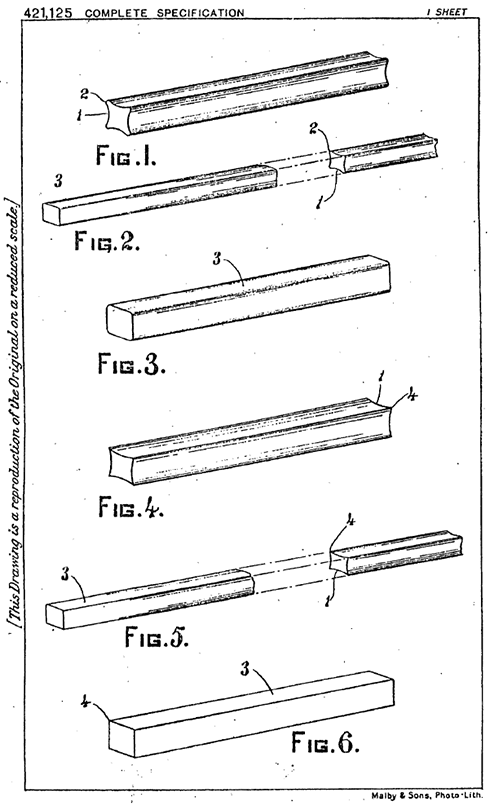 1960s: Another quarter of a century passes and the idea of a “square cigarette” surfaces again. This time it’s British American Tobacco’s G.T. Hart who thinks of it. 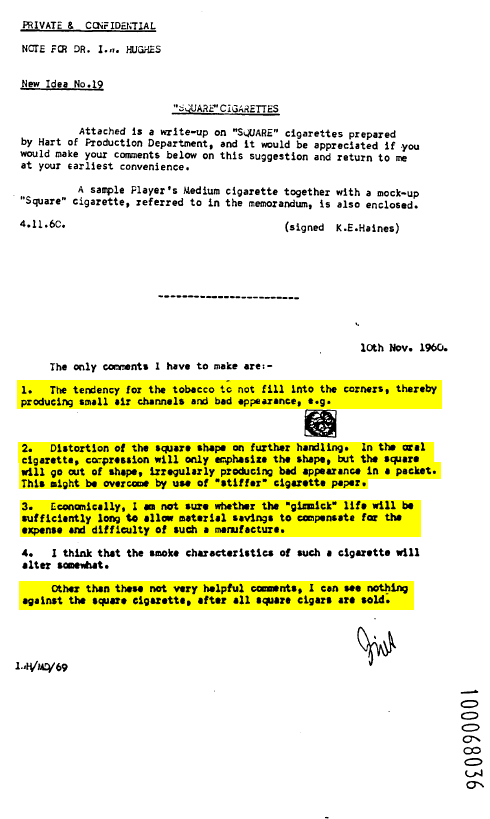 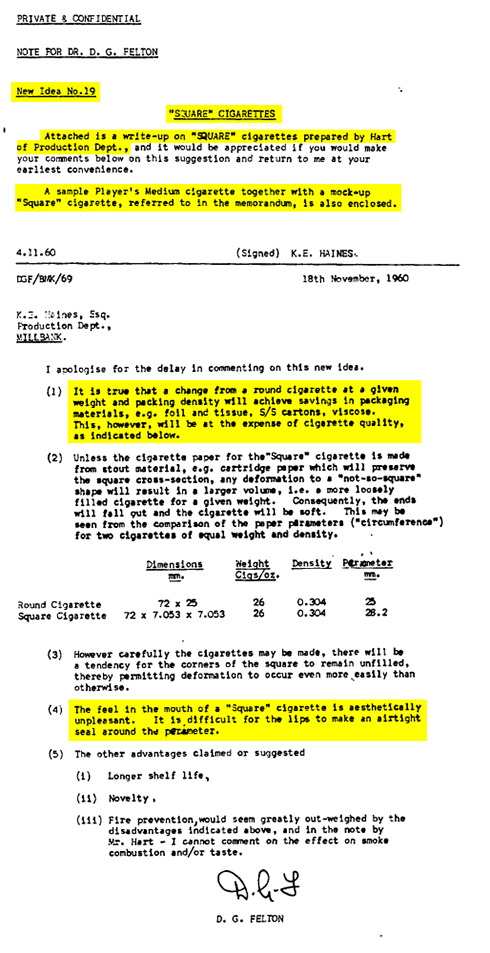 From the memos above, it sounds as if “Players” was the cigarette brand they were thinking of making square.  According to the minutes of meetings below, square cigarettes were still on the agenda in 1961… 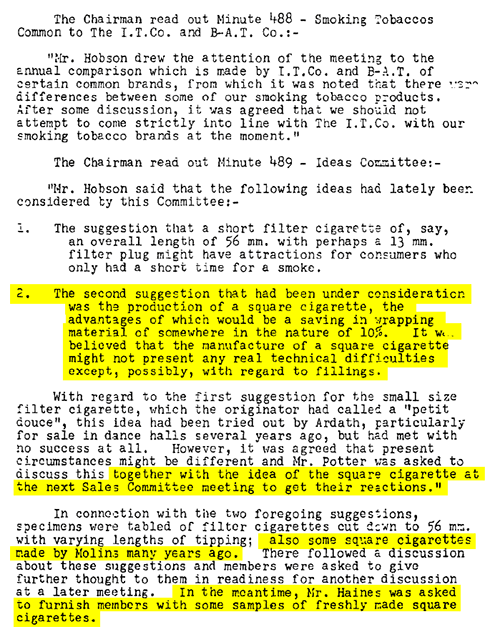 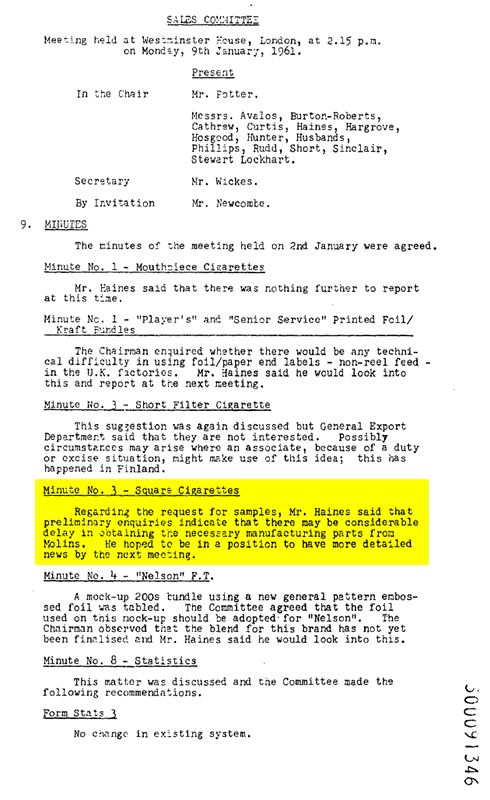 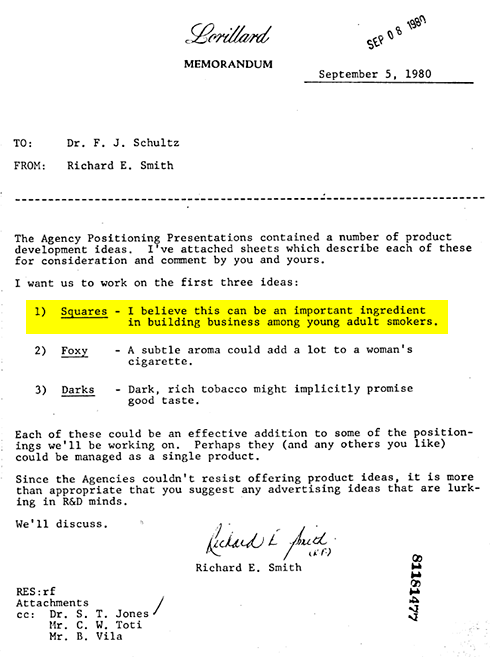 A square cigarette is the subject of this 1981 confidential memo from MCA Advertising: 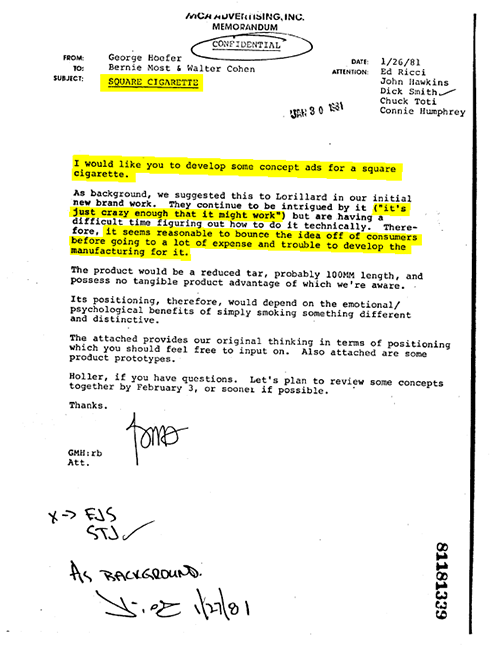 From the 1981 marketing research report:

“A new, sensational shape calculated to appeal to those people who like to be thought of as innovators, avant-garde, ahead of the time, stylish, and who enjoy being noticed.” 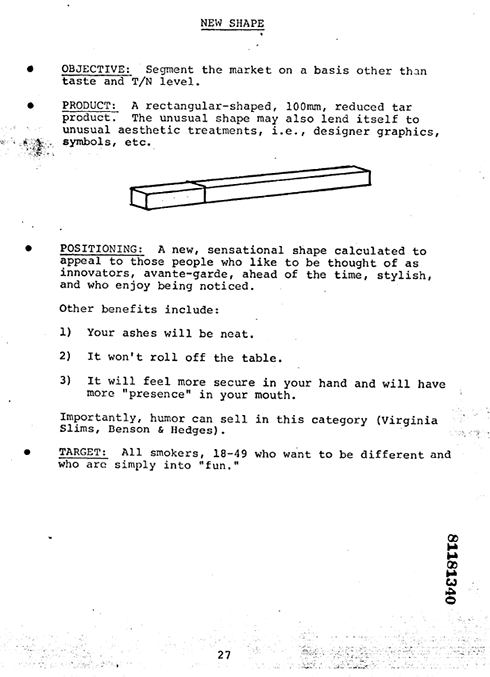 1998: None of this pans out, apparently, but 18 years later, in 1998, a number of advertising campaigns were being presented for Parliament cigarettes.

And one of the ideas was to create a square cigarette called Parliament “Squares.” 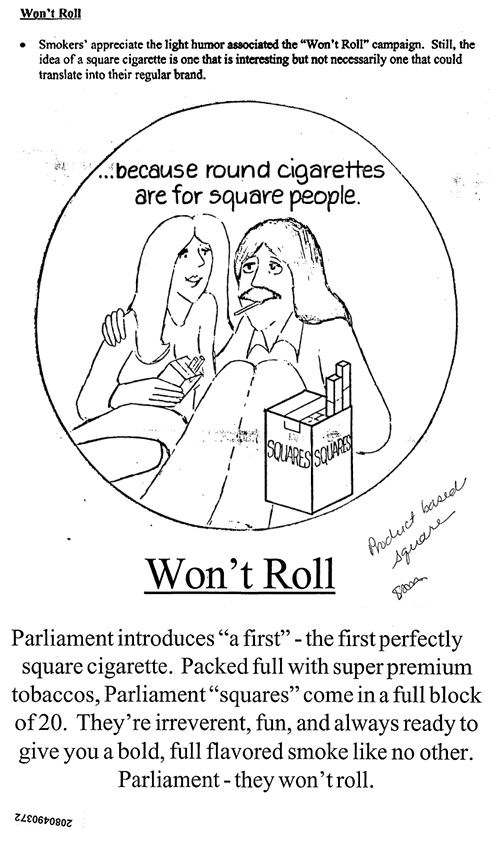 Parliament “Squares” never happened, but one year later, in 1999, the same idea is briefly proposed as a way to differentiate the Doral cigarette brand. 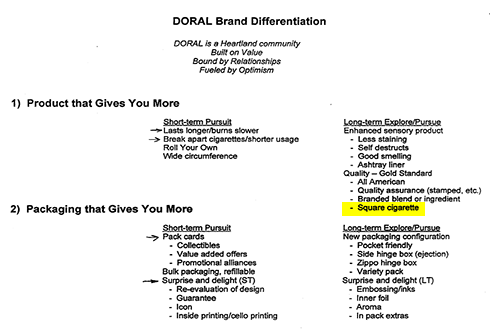 2006–today: Another 13 years goes by without much evidence of square cigarette smoke. Then, starting around 2006 inventors in China began applying for square-cigarette-related patents.

“…the present invention is the appearance of a square cigarette in the prior art is not the common cylindrical shape, but a square column shape, and the tobacco portion 43 and a filter 44 is a cross-sectional shape is square. This square shape cigarette has never seen before, is the inventor of a whim, and has all the features a cylindrical cigarette, but with the special properties of a square.  …due to its special square cross-section, so that square with your fingers gripping the smoke easier, but also more economical packaging and storage space.”

Once more we see no evidence online of these square cigarettes actually existing as a consumer product.

The patent below is for a 3D printed cigarette…

“The production method of the novel cigarette provided by the invention comprises the following steps: producing the cigarette by utilizing the 3D printing technology, increasing the tobacco powder layer by layer in hierarchical processing and superstition solidification forming ways to generate a 3D entity cigarette, spraying the adhesive through a 3D printer according to the shape of each cross section designed in software…

The tobacco rod is cylindrical in shape, square or triangular pillar prism.” 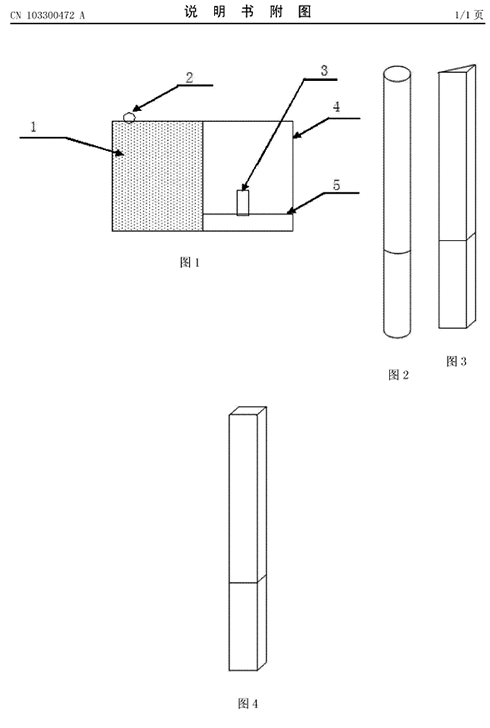