I found out about this on the French website, mathcurve.com, an online ENCYCLOPÉDIE DES FORMES MATHÉMATIQUES REMARQUABLES.

Looking more deeply into this somewhat hyperbolic milk carton, however, I think that it was really named berlingot and then the website translated the word into English.

The MathCurve Website also tells us that another possible name (not French) for the berlingot surface could be “humbug.” (Since “humbug” is another name for this kind of tetrahedral candy.)

2 more “milk cartons” after the fold…

Cundy & Rollett mentioned humbug candies in their discussion of the surface in Mathematical Models, although they called the surface a “quartic with two double lines.”

A simple but not very convincing example of such a surface is provided by the ‘old-fashioned humbug’. These potent sweetmeats seem to be made by twisting the material in just this way between two perpendicular skew lines at their extremities.

I was confused, at first, by the way the constructors of these models (and diagrams) sometimes show perpendicular ellipses at the ends and other times just perpendicular straight lines. Then I noticed the red threads in the model below. Those red lines show us where the ruled lines all cross—the effective edges of the “milk carton” form. (It’s easier to see how surface intersects itself in this photo.)

Also significant, but not super-obvious: the “milk carton” has a circular cross section where x, y and z intersect in the diagram above.

So why do they call these ruled surfaces non-developable?

Because we can’t make them with flat sheets of paper. Unlike cones or cylinders, this type of form has “compound curvature.” (like a sphere) And being “non-developable” makes a shape impractical for use as a folding carton.

Be careful, an [actual] milk carton … made of paper is a developable surface, made from a tetrahedron template by bending the edges…

And yet they’ve named this non-developable shape after a milk carton. What gives?

According to one commenter on Math.StackExchange: what “gives” is the material, itself.

The curved nature of the real-world milk cartons is because the material is slightly extensible.

In the realm of mathematical milk cartons, however, there is no such stretching or compression permitted. And hence, a doubly-curved surface is considered “non-developable.”

2. A non-developable ruled surface made from a milk carton

As we saw with yesterday’s milk carton torus, some people are also using milk cartons to make their hyperbolic, non-developable surfaces.

Joel Cryer from Wisconsin put together a lesson plan entitled Saddle Geometry. Here, he demonstrates how he recycled a small almond milk Tetra-Pak as a supporting structure for a hyperbolic paraboloid model.

Things start to get confusing when you consider how real-world milk cartons tend to bulge. As we are remind by another milk carton lesson plan, “If you look at the full carton … you can see that it bulges so isn’t strictly a rectangular prism.” 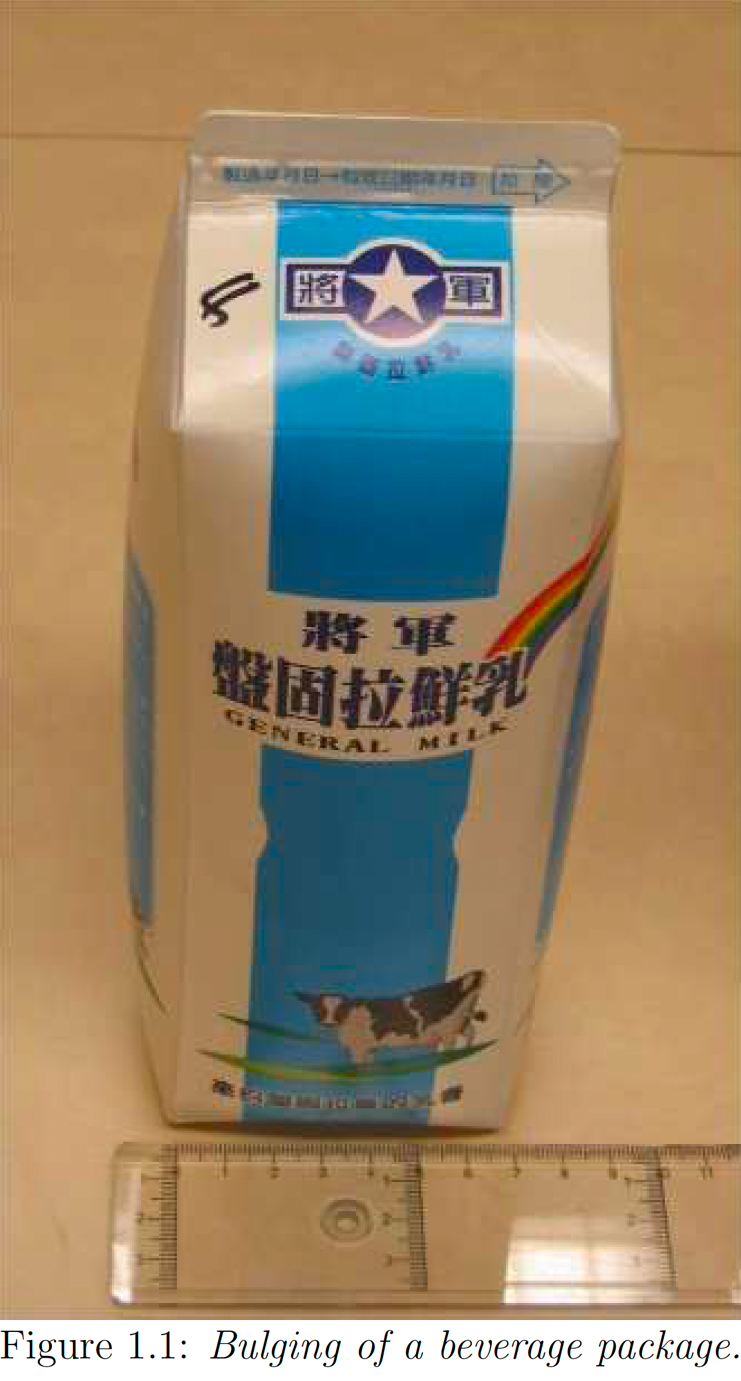 So, on the one hand, you can only make a paperboard milk carton of a “developable” shape. But, on the other hand, your carton inevitably assumes a “non-developable” hyperbolic shape. (Mathematically, speaking.)

A milk carton’s tendency to bulge will sometimes grow into a full-fledged packaging problem.

Packages made from paper and plastics have many advantages compared to packages made from other materials, e.g. paper and plastics are easy to manufacture and are environment-friendly. A drawback is that beverage packages made of paper and plastic materials stored for a long time, deform due to creep deformations, causing swelling of the packages, which adopt the shape of a “balloon”, shown in Figure 1.1. This phenomena is called bulging. In the end the final customers, i.e. you and I, will think that the content is fermented and will pick another package. Thus, the swelled packages will be rejected and unsold.