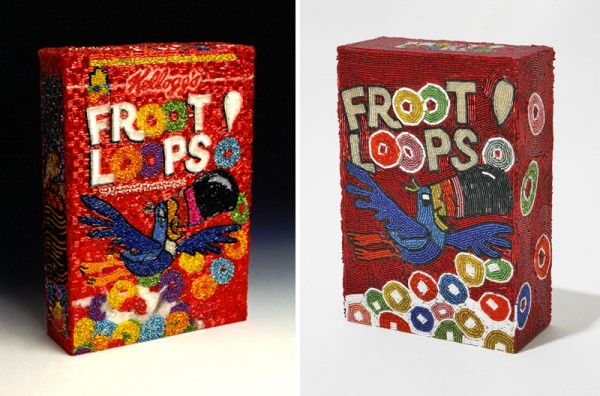 I make sport sometimes of pointing out coincidentally similar artworks and ideas, but I empathize with such artists, suddenly realizing there’s an oeuvre overlap.  It’s hard to stake out a creative territory for oneself and ever be truly certain that it isn’t already occupied by somebody else. (See: In Six Moves, footnote #2)

Most likely, one or the other got there first, but that doesn’t always count for much. Free markets are random and capricious about giving credit where credit is due. (Likewise for money, attention, love, respect…)  Finding yourself in direct competition with a doppelganger raises the stakes in ways that are probably unpleasant for both parties.

That said, if your chosen medium is glass beads and you’ve made sculptures of consumer packaging, then there’s a high probability that some of the same brands will be depicted by both you and your doppelganger. 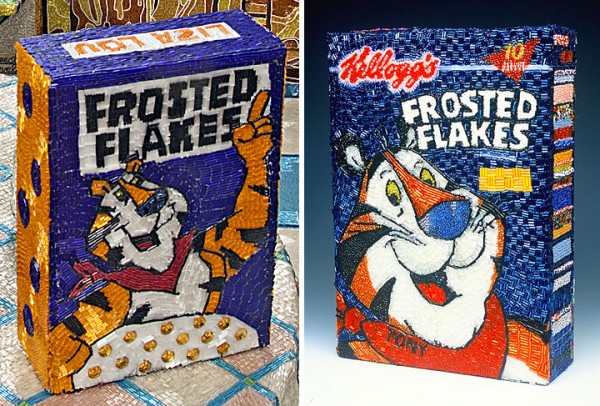 (More about each of these two artists, after the fold…) 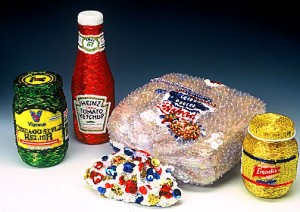 1. Linda Dolack is in the unenviable 2nd place position, in relation to Liza Lou, whose beaded sculptures of consumer packaging predate Dolack’s by a few years.

Dolack has soldiered on (despite the coincidental overlap) exhibiting and selling her work, earning favorable reviews, etc.

(Her Red Bull and Diet Red Bull goblets are in the permanent collection of the Museum of Art and Design.)

…Linda Dolack’s richly textured replicas in glass beads of junk food packaging. It’s beyond me why anyone would want to spend so much time and energy recreating something so ephemeral, yet these glitzy trinkets draw you in with their unbelievably exquisite finesse. I defy viewers to remain immune to their charm.

Benjamin Genocchio, An Exhibit Stocked With More Food Than Many Pantries
NY Times, 2003 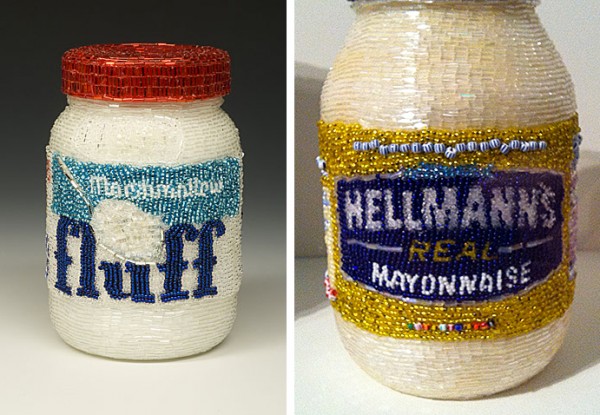 Dolack packages packages, and in so doing might just be touching on the central substance of contemporary life.

Another remarks on its time-consuming nature…

In her most recent work Dolack has copied the designs on food packages with colored beads, producing life-size replicas that glitter even more alluringly than the real thing. “I think the original packaging is beautiful,” says Dolack …

The repetitive labor required to ornament the sculptures—gluing the beads onto one side of a cereal box for Trix took 28 hours—is a reference to “women’s work,” to Dolack’s own decades of working in the home. Raised in Rolling Meadows, she dropped out of college in the 60s to marry, though she eventually earned two art degrees. 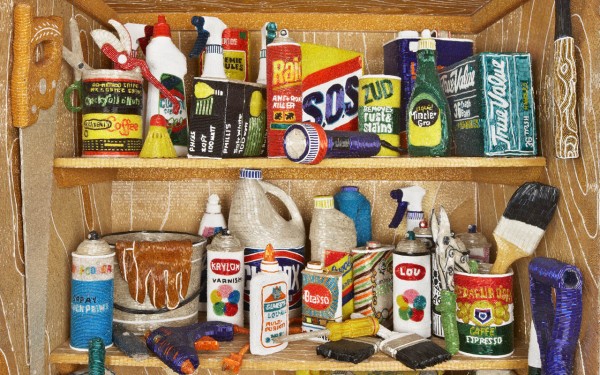 2. Liza Lou created most of her beaded consumer packaging sculpture between 1990 and 1998 as part of a larger installation, in which she beaded an entire kitchen and backyard environment.

Lou is keenly aware that she has carved out a distinctive niche for herself. She has earned recognition and praise, to be sure, but at the price of monastic dedication and a significant amount of misinterpretation. She recalls being cautioned while she was toiling over Kitchen, “You should stop. You’re going to be a joke. You should stop now.” But as she explains, “That was my incitement: ‘If a [beaded] cereal box is so upsetting to you, wait ’til you see what I’m really gonna do!’” Lou displays both a singular vision and the dogged determination to realize it. “Wow, you hate this?” she rhetorically asks. “Great!” 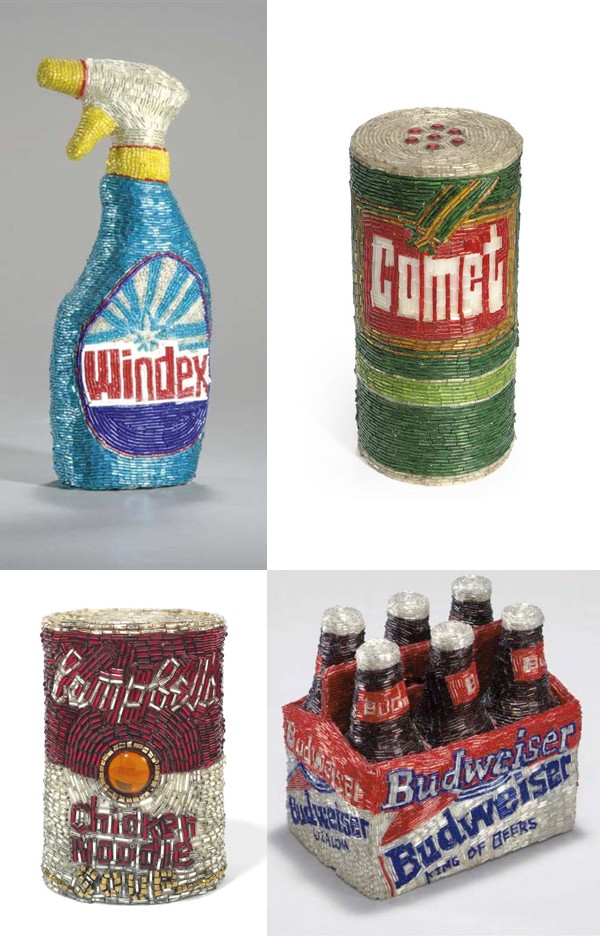 The thing is, while Liza Lou still works with glass beads, she’s effectively ceded the post-Pop consumer packaging thing. What she has increasingly focused on instead is the labor, while creating more formally conceptual sculptures that do not allude to consumer packaging at all.

There are numerous contemporary artists for whom strenuous manual labour is an important aspect of their work. Liza Lou for example, who has made her early bead-covered installations such as Kitchen (1991-1995) all by herself by hand, over many years, speaks emphatically about the intrinsic value of manual labour: that labour for its own sake is intrinsically virtuous: “Even labor, even the most repetitive, difficult type of labor like scrubbing floors, that has value too. So I’m hoping to give dignity to labor and give dignity to everyday life.”

Gabriella Solti, From ‘Means to Ends’: Labour As Art Practice

Liza Lou, for the past six years, has maintained a studio in South Africa, where she works with Zulu artisans whose families have worked with beads for generations. While Lou does not borrow from the tradition of African bead work, this new body of work reflects her travels, meditating upon process, the impossibility of perfection, and what Lou terms “the culpability of craft.” 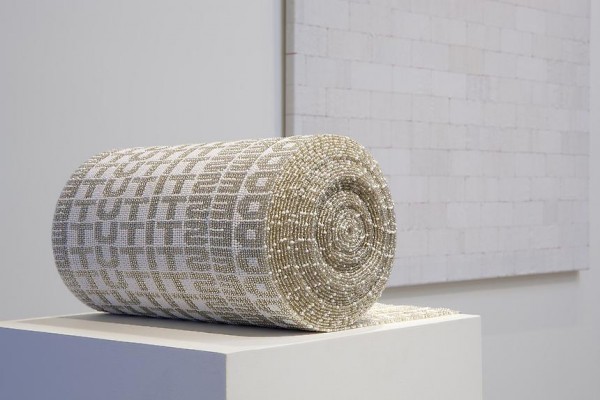 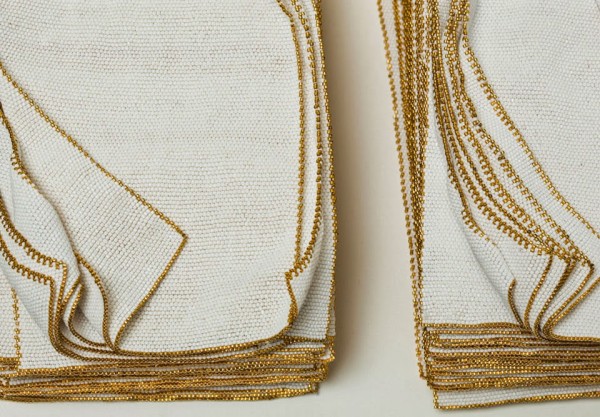 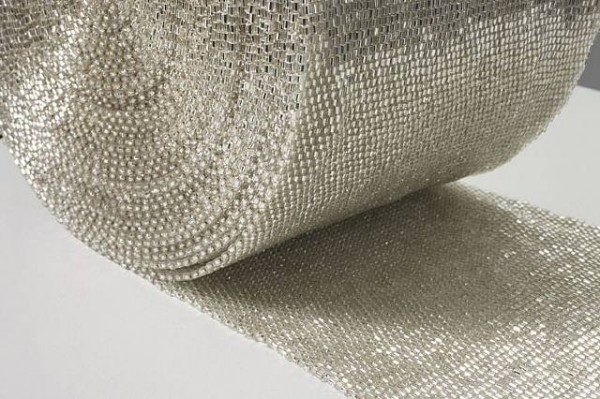 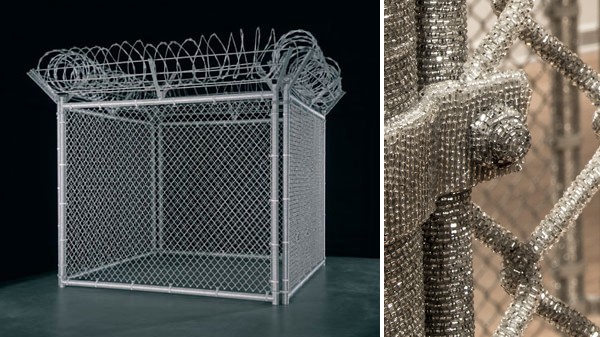 I think we’ll make “Oeuvre Overlap” a semi-regular column on box vox. It’s a thing we’ve been noticing for a while (see: Bubble Gun | Chewing Gun and Brancusi Toilet Bowls) only now we’re just giving it a name.