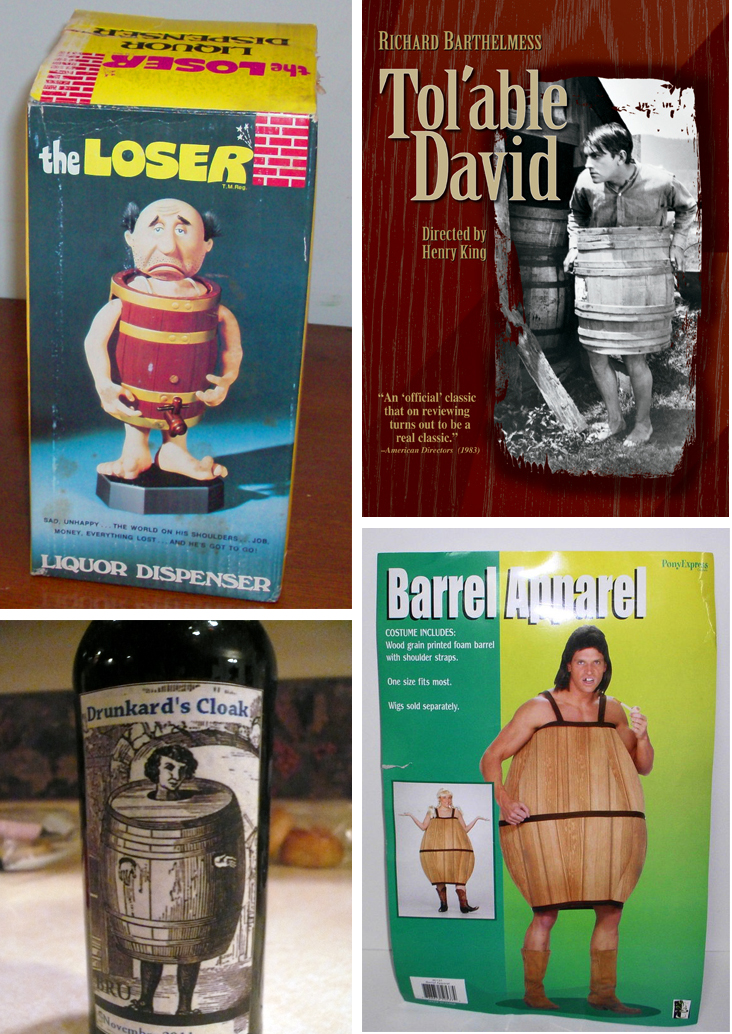 Package design for losers? A barrel.

I went ahead and titled this one as a companion piece to last month’s Package Design for Dummies. Although it has even less to do with “package design” than that earlier post about ventriloquist dummies.

“Loser” is not a term I much like. It’s one thing when it’s used to describe a non-winner in a fair competition, but as an epithet for your less successful acquaintances, it’s like social Darwinism, up close and personal.

Since the Poynter Products liquor dispenser (above left) is named “The Loser,” however, and since “loss” does seem to describe most of the different reasons that a person might be reduced to wearing a barrel, I thought it was apt in this case.

Barrel as garment: 4 kinds of loser… 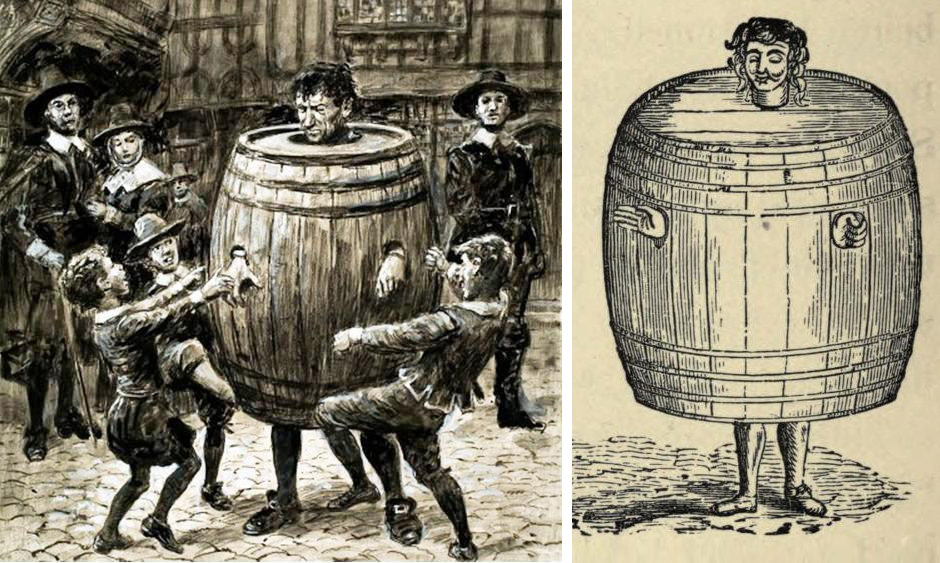 The “drunkard’s cloak” was a humiliating pillory for alcoholics in the 1600s. Forcing the drunkard to wear a barrel was deemed a fitting punishment. (Loss of dignity)

The photos below, however, show a more recent barrel/pillory used in 1932 to punish prisoners at Florida’s Sunbeam Prison Camp. (Loss of life)

A demonstration of barrel restraint worn by Arthur Maillefert in prison days before his death. The 19 year old inmate, a resident of New Jersey, died in the Sunbeam Prison Camp in Florida. He was strangled by the chain that held him in place while he was unable to help himself to stand again because his feet were in stocks. The Maillefert case of abuse received much attention and was steadily reported on by the New York Times.

Photo on left from University of Washington digital archives; comic book cover via: The Creepshow

A far less troubling reason for wearing a barrel is personal modesty. (Loss of clothes) Usually seen in outdoors scenarios where clothes have gone missing and the barrel serves as improvised clothing. Usually played for laughs, as in this clip from the 1921 silent film, “Tol’able David”… 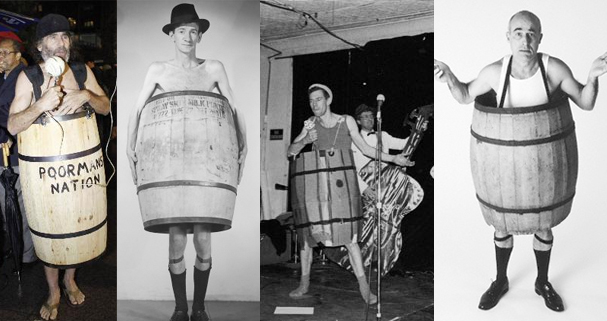 It’s not entirely clear when wearing a “bankruptcy barrel” became a metaphor for poverty. Similar to using a barrel as improvised replacement clothing for modesty’s sake, but here the implication is that you just cannot afford clothing to begin with. (Loss of money)

Although wooden barrels are now a fairly archaic form of packaging, the meaning of wearing one in this context is still well understood.

The 1st photo (in color) is of Jim “Poorman” Trenton wearing a barrel inscribed with the words “POORMANS NATION” last October in Zuccotti Park during the Occupy Wall Street demonstrations.

The photo, 2nd from the right is of Alan Moore wearing a barrel while “singing about poverty” during a 1984 exhibition at ABC No Rio, entitled, “Island of Negative Utopia.”

The opposite of modesty.

“A person arrested for indecent exposure and charged with a first-degree misdemeanor can experience public humiliation and loss of reputation.”

Here the barrel is all about the humorous  gag of exposing oneself. The “Waggish Drunkard” (in the center photo above) has a barrel that pulls down to reveal a toy plastic erection. The “Barrel Man” on the right is a popular souvenir of the Philippines. Here too, removing the barrel reveals, an erection.

The Loser liquor dispenser is a bit different. A battery powered automata with an obviously phallic barrel tap. “The Loser” basically fills your glass by peeing into it. See Swedish Chef’s video below….