Day 4: a couple of people have asked me, “Why am I so interested in Robert Sidney Dickens?” Or put another way, “What’s driving my interest?”

They say that “the heart wants what the heart wants” and maybe curiosity is similarly ineffable. But it might also be true that I identify a little bit with Sid Dickens. Although, really I should just be envious.

Sid Dickens is having the time of his life right now overseeing the construction of his elegant new studio/office/home on Chicago’s near north side. It will boast such attractions as a large laboratory supermarket, a sauna bath and a sunken Japanese garden. But life wasn’t always so pleasurable.

As a youngster of 19, without benefit of either college or art school, he set out for the big city from Indiana without much more than an air brush acquired in lieu of salary from an itinerant barn painter. He landed a job painting movie posters for a big theater chain (“they were tamer then”). Sacked by the Depression on Christmas Eve, 1932, he “free lanced” for the next several months (“that’s a genteel way of saying ‘starved’ “). Finally he acquired two dissimilar clients — Sears, Roebuck and fan dancer Sally Rand — and things began to look up. He found his calling with a commission to design 50 ethical pharmaceutical packages for Walgreen Drug Co. He charged $5 per. Needless to say, the blue-chip roster of Dickens clients today — Armour, Coca-Cola, Morrell, Hamm’s, Quaker Oats and many others — pay a bit more for his services.

Like Dickens and his wife, Ruth, our focus on package design was sort of happenstance. We acquired a manufacturing client and decided to specialize in package design. We, too, have a “home office.”

The comparison is merely aspirational, of course. Dickens’ firm grew to employ as many as 23 staffers. BEACH, on the other hand, remains small, serving small startups and mid-size manufacturers. Unlike Dickens, our home office does not include a “large laboratory supermarket.” (Although, we do have a small, in-house photo-studio.)

Still, the Dickens Design Group remained a family-owned business (until “shutting down” in 1989.) And this was a pretty interesting family.

Bob Dickens, his dad and mom all became interested in sports cars when they lived in Chicago. “In 1949 my father Sid bought a 1948 MG TC as a birthday gift for my mom, Ruth. It was black but he had it painted her favorite color, a chartreuse green. Dad and I were amongst the six founding members of the original Elkhart Lake road course… Our whole family raced the ‘TC there. My dad drove it off a corner, which now sports a National Historic Registry sign titled ‘Dickens Ditch.'”

They Started in MGs: Profiles of Sports Car Racers of the 1950s
Carl Goodwin, 2011

Behind the wheel, Sid was the terror of the track in his MG-TC, back in the ’50’s. Later, he and Bob both drove the small Italian “bombs,” painted “Dickens Red,” actually an off-terra cotta color, still seen today in the offices and some of Sid’s clothing. Old sports car fans remember fondly the appearance of the Dickens Racing Team, with Ruth, Sid, and Bob all in Dickens Red driving suits. “Just another part of design,” says Sid.

Sid Dickens also designed at least one of the programs for the racetrack that he helped to found. The “official program” for the 1951 Elkhart Lake road race (shown above) includes a stylish “Dickens” signature.

Dickens’ son, Robert Lee Dickens is featured on the cover of the 1952 program the following year. (It seems likely that this program was also designed by a Dickens.)

Sid Dickens was a tireless self-promoter. The Dickens family “racing team” (in matching “Dickens Red” racing suits) is just one example of how he always managed to provide an interesting angle for reporters writing about his firm. We have many other examples, after the fold… 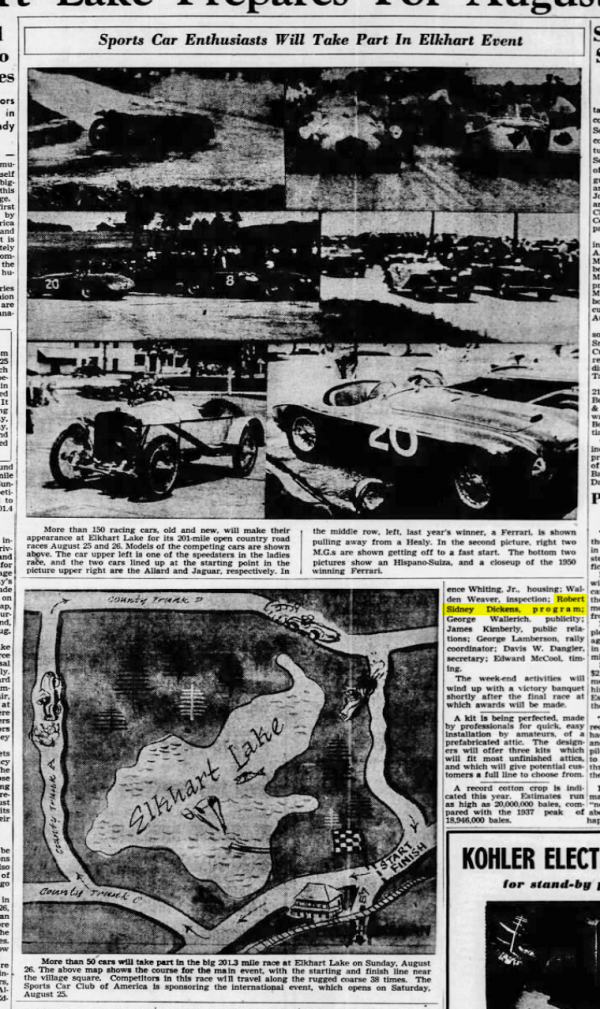 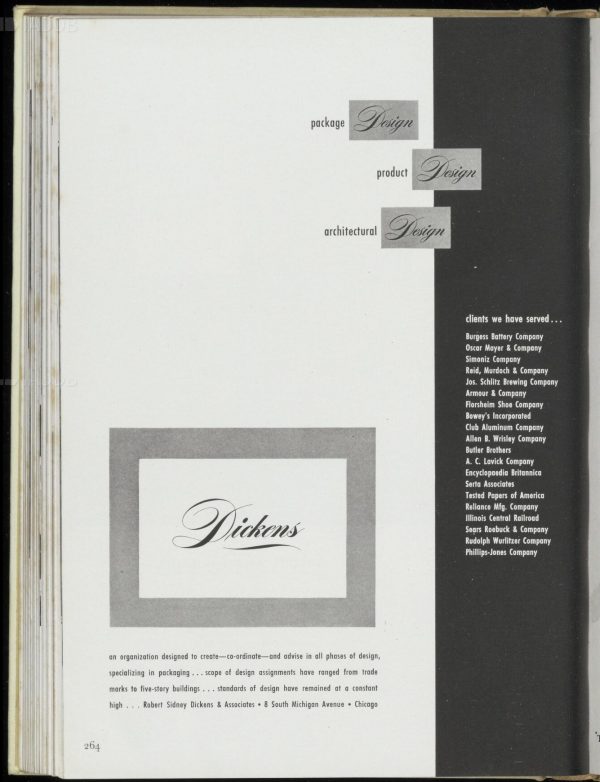 In 1949, Dickens placed this ad in the “Art Directors Annual Advertising Arts.” Although the text mentions “specializing in packaging,” Dickens was still casting a wider net, offering “product design” and “architectural design” as well. 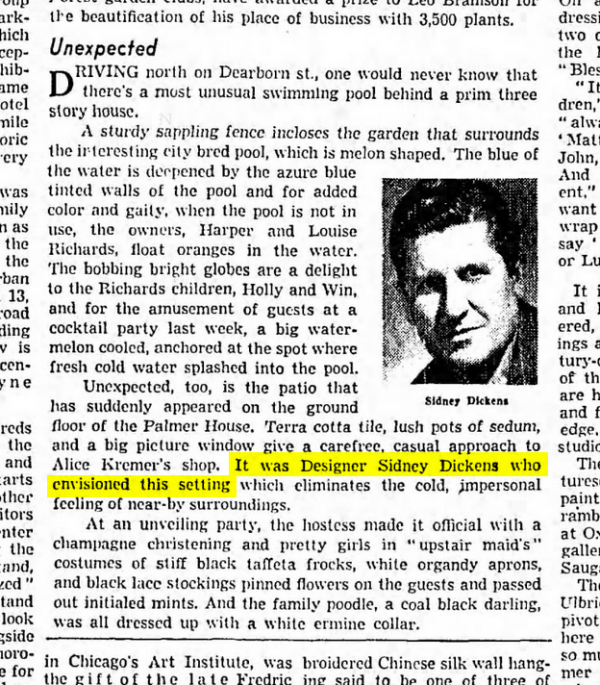 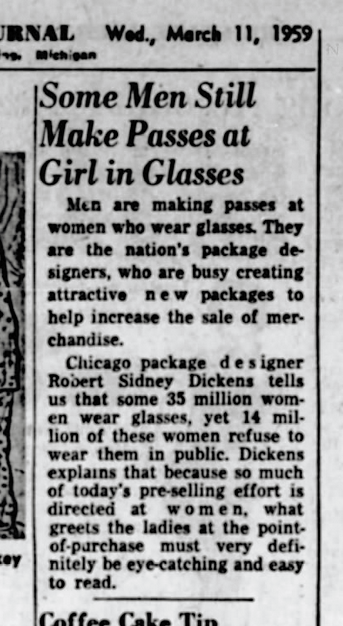 The Chicago Tribune published the “Unexpected” piece above in 1953 about some architectural design work that Dickens did—a pool and patio that he designed.

By 1959, however, Dickens was creating self-promotional opportunities with a variety of packaging-related stories.

Many of these articles include a condescending sort of 1950s sexism, that seems somehow out-of-step with Ruth Dickens ground-breaking role as one of the very first female race car drivers.

The article on the right from a 1959 issue of the State Journal, for example, carries the headline: “Some Men Still Make Passes at Girls in Glasses.”

Several newspapers also published a version of the article below about supermarket packaging putting “housewives in a trance.” This one is actually interesting to us, since it appears to have based its conclusions on studies by a Chicago visual survey organization called, “Pax-Fax, Inc.” (Pax-Fax, of course, was Dickens’ very own packaging research firm!) 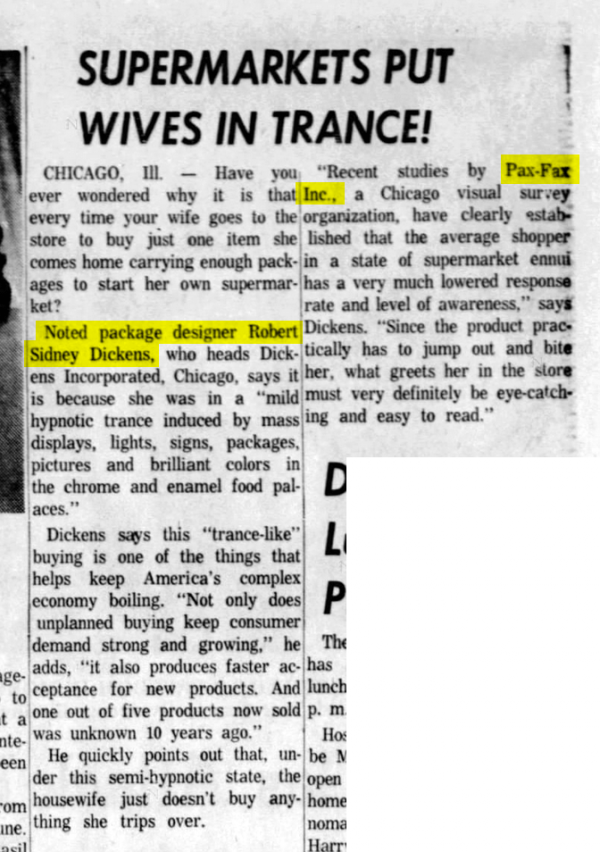 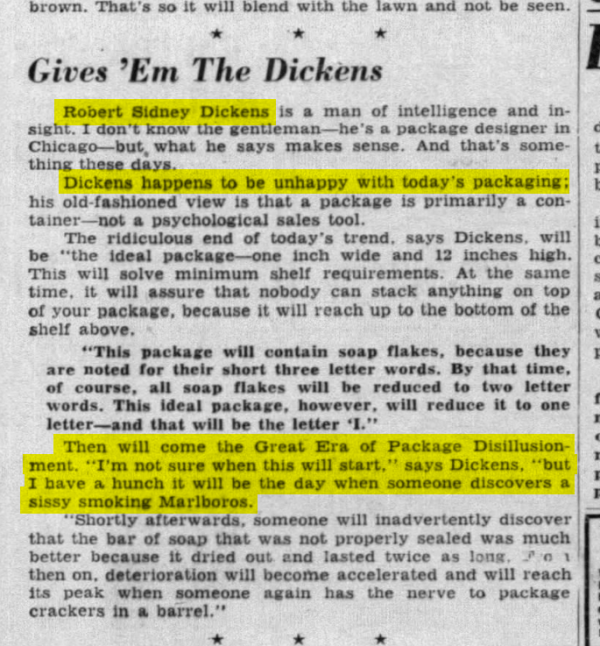 The Fort Lauderdale News printed “Gives ’em the Dickens” (above) in 1959. Here Dickens says he has a hunch that “the Great Era of Packaging Disillusionment” will “be the day that someone discovers a sissy smoking Marlboros.” That “sissy,” of course jumped out at us and not just because it’s vintage homophobia. We know, from earlier research that the Marlboro brand actually started out as a filter cigarette for women—red-tipped so as to conceal lipstick traces. So any inherent Marlboro manliness was always a branding thing.

On the one hand, Dickens positioned himself as a packaging expert who promoted the benifits of “prepackaged” foods. (As in this 1969 article from the Elmira Advertiser) 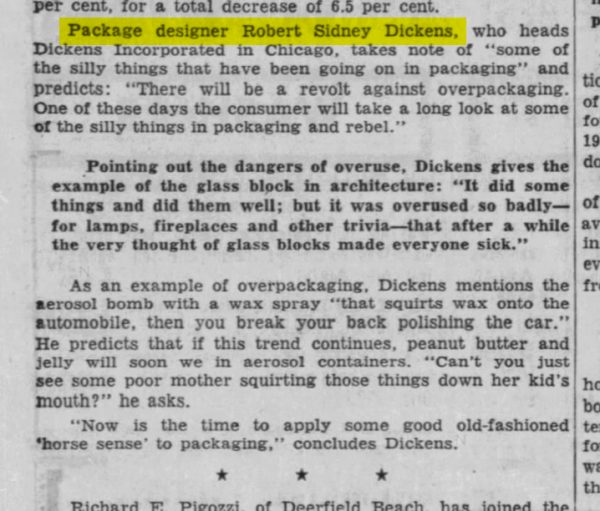 But on the other hand, Dickens also decried “overpackaging.” (As in the 1959 article in the Fort Lauderdale News above)

The Chicago Tribune also printed no fewer than 3 long articles about various home and home/office renovations that Dickens undertook.

Margaret Scully’s piece, A Designer’s Home Should Be Intriguing and This One Is, was published in 1950.

Ann Douglas wrote Home and Studio a Clever Blend in 1956.

In 1963, The Chicago Tribune published the article above, focusing on the in-house “supermarket laboratory” (that had formerly been Ruth and Sidney’s bedroom).

There were also some articles covering Dickens’ forays into fashion, as in this 1966 article entitled, “Package Designer Packages Himself.”

I know. (A lot of press clippings but no actual packaging.) Please stay tuned…