At the dawn of packaging, consumers had to smash open their cans with rocks because no one had thought to invent the can-opener yet.

Not all of Alan Sailer‘s photographs involve package smashing, but a high enough percentage that I couldn’t hope to feature them all here.

And there are a number of great package smashing videos on his Flickr site. For example… 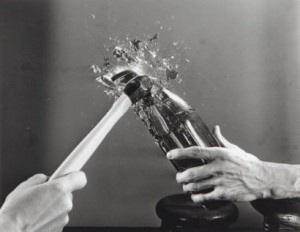 Sailer’s high speed camera set up was based on the work of MIT’s Dr. Harold Edgerton.

Well known for his innovations in high-speed photography of milk droplets and bullets, fired through apples, Edgerton, himself indulged in a small amount  of package smashing. On the right is his 1960 photograph, Coke Bottle Smash (via: National Gallery of Australia)