I was working on a packaging-related Thanksgiving day post last month, but I was just too busy to finish it in time. Sad. Maybe you’ll see that post next year. (If we still have anything to be thankful for by then.)

Meanwhile, I don’t want to let another holiday slip by without at least one packaging-related blog post. And (thankfully) I won’t have to.

It may or may not be a news to you that the National Biscuit Company (Nabisco) first launched their animal crackers brand as a seasonal, Christmas ornament pack.

With Barnum’s Animals, however, the company set out to create a promotional Christmas item, but wound up changing the way that their product was sold year round.

… in 1902, the now-familiar box was designed for the Christmas season with the innovative idea of attaching a string to hang from the Christmas tree. Until that time, crackers were generally sold only in bulk (the proverbial “cracker barrel”) or in large tins. These small cartons, which retailed for 5 cents at the time of their release, were a big hit and are still sold today.

–from Wikipedia’s entry on: Animal Cracker

I searched online for pictures of these animal cracker boxes hanging on Christmas trees. I found some, but there was a glaring problem.

The event culminates in a visit from Santa Claus and lighting of the 16-foot-tall Grand Hall Christmas Tree, with its historically accurate trimmings. Henry Flagler’s youngest descendants flip the switch.

… Each visitor received a box of animal crackers, a treat invented in the Gilded Age. The crackers used to be made with strings attached so they could be hung as ornaments.

While museums wishing to create historic vignettes of Christmastime in the early 1900s, like to decorate their trees with boxes of Barnum’s Animals Crackers, these particular boxes (with the blue “Good Source Of Calcium” violator) are not historically accurate.

Fact is, you’d be hard-pressed to find an authentic image of the original 1902 packs hanging on a Christmas tree. Realizing this, I knew I’d have to try…

This mention appeared as part of an ad in the Hartford Courant on December 15, 1902 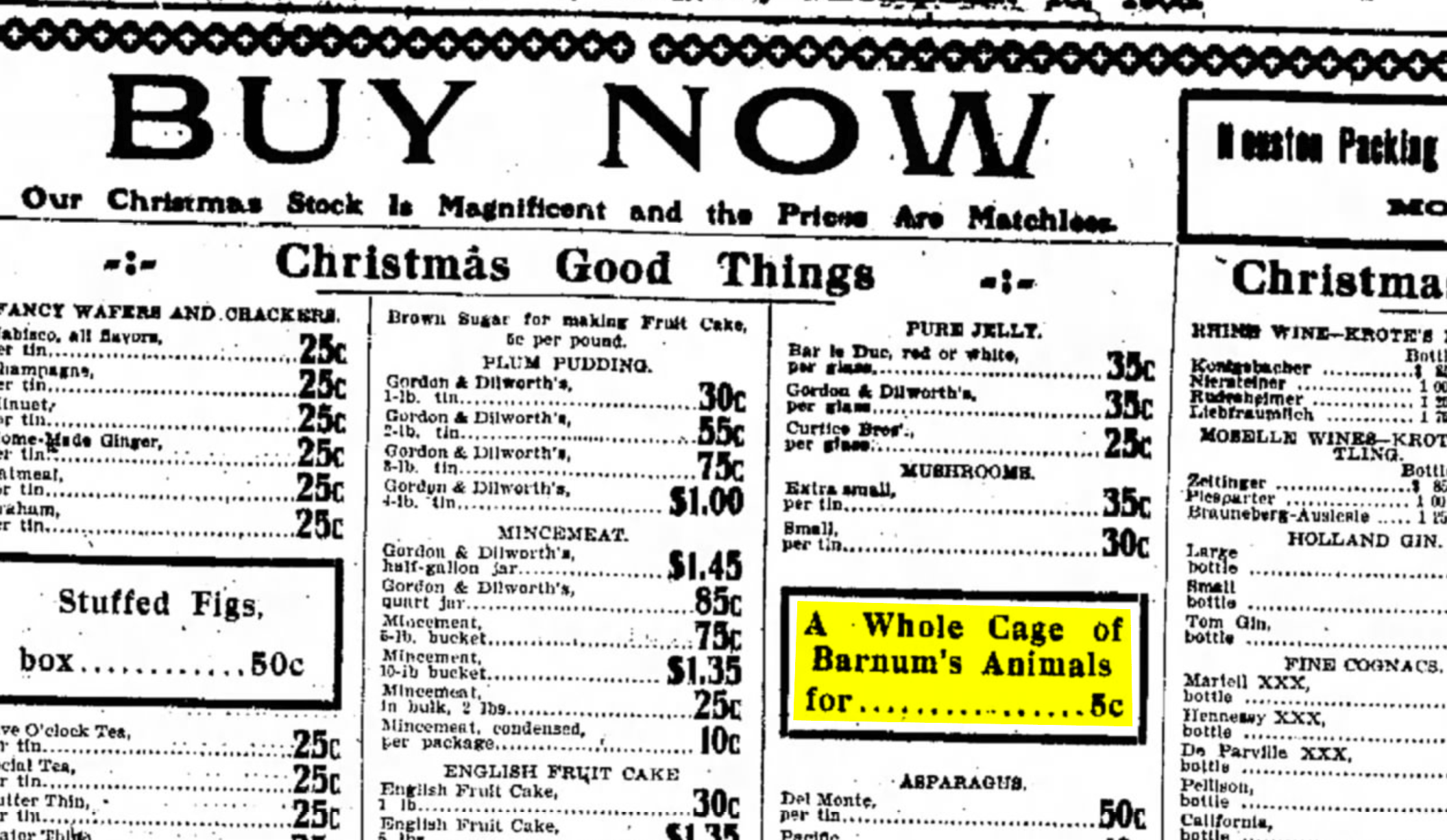 Although I found more newspaper ads for the product published over the years during the month of December, it was hard to find one that specifically suggested that the package should be hung on the Christmas tree. And yet, I did manage to find the ad below.

But none of these ads included a picture of the box (or boxes) hanging on the tree.

I did find one article, however, in a 1921 issue of Printer’s Ink Monthly that included such a picture. In this article, C.B. Larrabee writes about the the National Biscuit Company’s December car card campaign. He details how the company prepares monthly “car cards” —streetcar cards, actually—promoting two or three of its products. Printer’s Ink Monthly reproduced 4 of the 6 Christmas themed car cards, one of which shows the 1921 Barnum’s Animals box hanging on a Christmas tree. 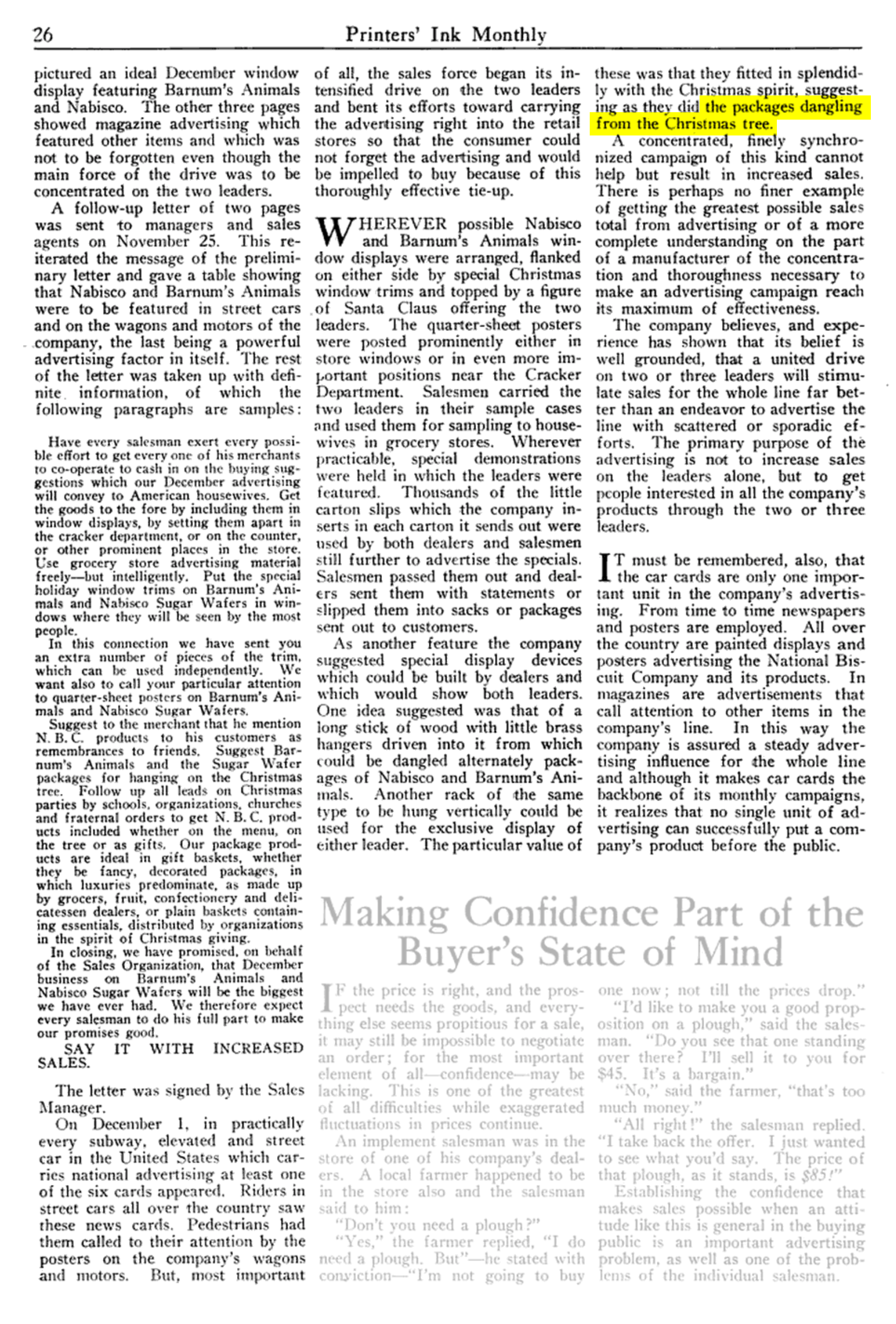 This explained a lot. Instead of newspapers or magazines, the company appears to have been advertising their products in streetcars and trolleys.

Some people collect streetcar “car cards.” I searched  online to see whether I could find a full color photo of any of the December 1921 car cards, but no luck.

But even if we can’t find a color picture of the 1902 Barnum’s Animals Christmas ornament pack hanging on a Christmas tree, we can still establish which packs would be the historically accurate, turn-of-the-Century version(s).

Looking for the very first version of the box, I found this quote online:

Now, there is some debate over the very first Barnum’s Animal box.  We have both boxes. The two boxes that we have are both marked with the IN-ER SEAL trademark on the ends. Both also do not have any advertising on the bottom of the boxes. However, only one of these two boxes states “5 CENTS.” So, is the box marked “5 CENTS” the first box, or is the other box without a price the first box? I guess we may never know, but the one thing we do know is that both are rare and valuable.

I contacted Charlie Brown, hoping to find a photograph of the original packaging.

He generously shared photos of several boxes in his collection! He says that the one below is the original 1902 version (with the IN-ER SEAL logo on the side panels).

The monkeys jumping rope on the top panel, draw a clear analogy to the string at the top of the box.

We have been collecting National Biscuit Company antiques & memorabilia for 44 years. Our collection contains all facets of The National Biscuit Company. We have every Barnum’s Animal Cracker  box released since 1902. As you know, they were released at Christmas time in 1902. Adolphus Williamson Green (second President of National Biscuit Company), got his idea for the package after attending the P.T. Barnum Circus that year. They were called “String Boxes” and at first, were to be a seasonal item, only at Christmas… However after the first Christmas, the demand was so great, the company decided to make them available year round.

Brown sent us photos of four of the earliest string boxes. 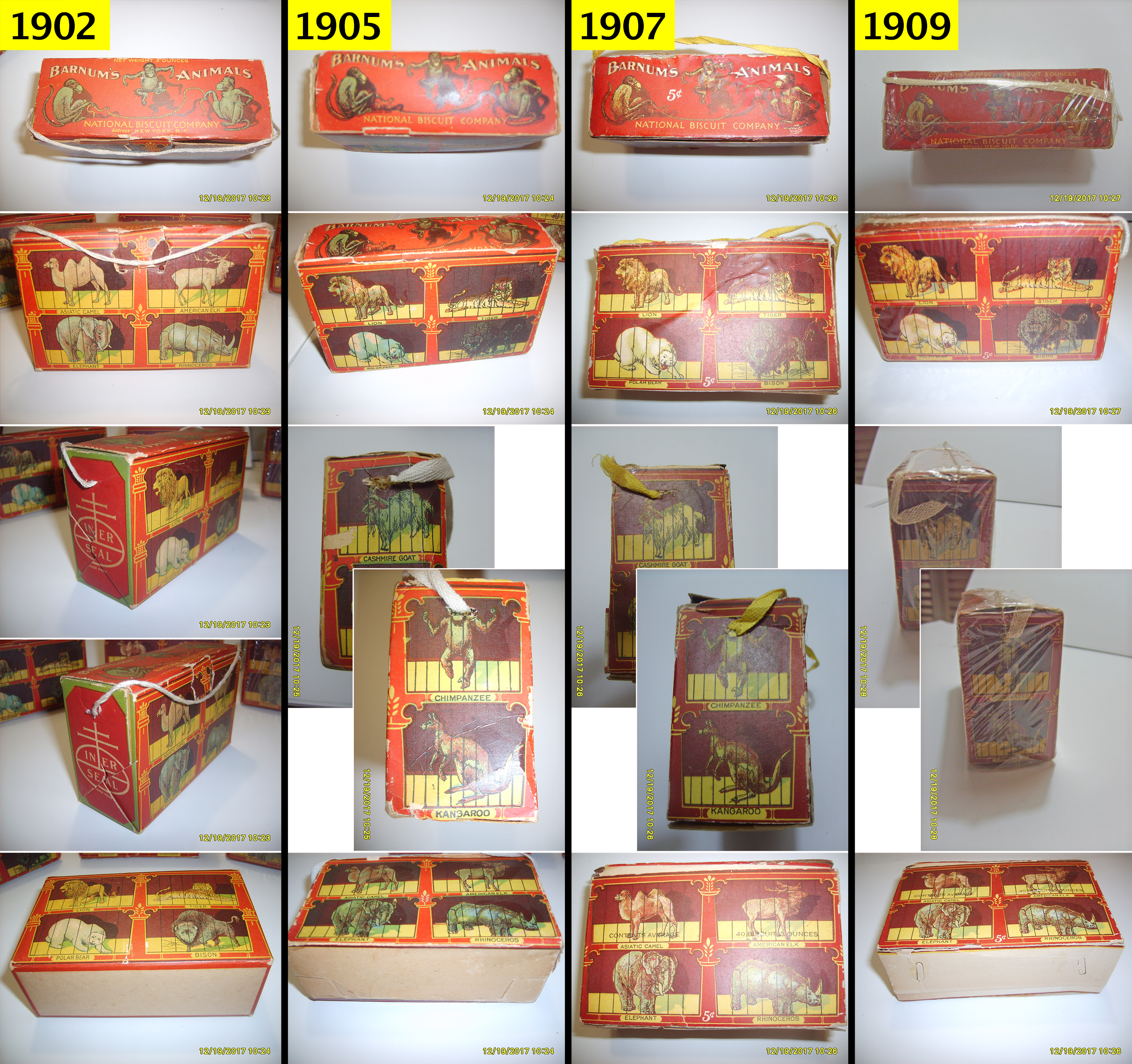 Although the company apparently launched the product with its IN-ER SEAL “colophon” logo on the 1902 box, they soon eliminate that in favor of more caged animals. Look at the 1921 illustration at the top of this post and you’ll see that a different “N.B.C.” colophon logo reappeared on the 1921 version of the box.

Also: none of these boxes include the circus wagon wheels, which show up in later versions of the package design.

Anyway, museum curators truly wishing to create an authentic 1900s Christmas experience should take note. The Inner Seal Collectors Club might be a better source of “historically accurate trimmings” than the local supermarket.

Brown also pointed out to us, that Nabisco used string boxes for a number of different products. 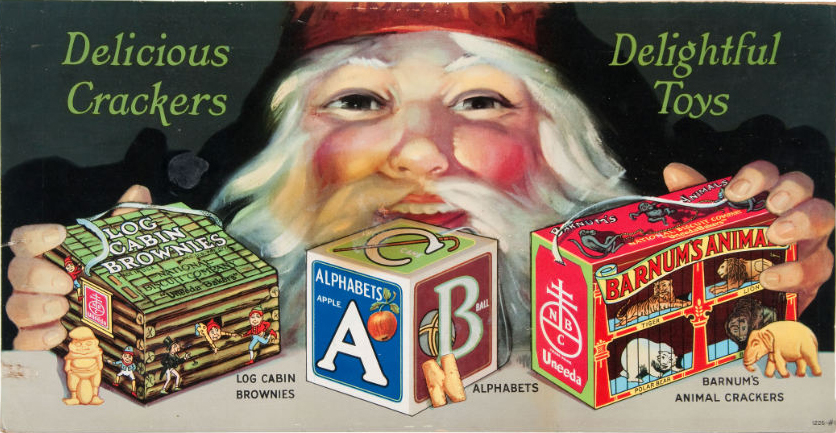 Santa shows us 3 of these string boxes in the Nabisco “trolley sign” ad above — all being marketed during Christmas sometime around 1923. How do we know this? Because the colophon logo includes the “Uneeda” name beneath the N.B.C.