A metaphor for something you should never start: a can of worms. In this case, however, “Worms” was “a cherry blended soda.”

LADCo (the Larry and Duane Company) launched this product in 1974.

Who exactly were Larry and Duane? I’ve spent way too much time recently, trying to answer that question.

Through a forum discussion of the product on inthe70s.com, I learned that they both worked for Pepsi-Cola in Wisconsin.

Worms soda was the brainchild of my uncle, Duane then working as a Pepsi distributor in New Richmond WI. He hatched the idea for the name while seeing a young boy fishing while driving his routes. Worms became a regional hit in Northern WI and MN and represented a manifestation of Duane’s unorthodox ways and thinking, always ready to mix things up a bit.

My father, Duane Paulsen, and my mother Verna Paulsen created “Can full of worms” soda in the seventies when I was a small boy.

The franchise was created in 1974 by LADCo (the Larry and Duane Company). Jon’s Uncle Duane and my dad Larry were both working at Pepsi then — Duane in New Richmond and Larry in Frederic. The marketing designs for the cans, the t-shirts, etc was completed at my dad’s kitchen table. The franchise was sold to a group in Oregon in the early ’80’s.

Craig’s description above suggests that Larry might have designed or supervised the design of the packaging. But who created the illustration of the goofy kid’s face with the red wooden sign? Someone sitting at that kitchen table?

On one side of the can they wrote “I like WORMS” and on the other side they wrote “Best WORMS You Ever Tasted.”

Because of these dual messages on the red signs, there’s some confusion about the brand name.

A lot of people call it “I Like Worms” soda. In fact, LADCo won trademark protection only for the word “Worms.” 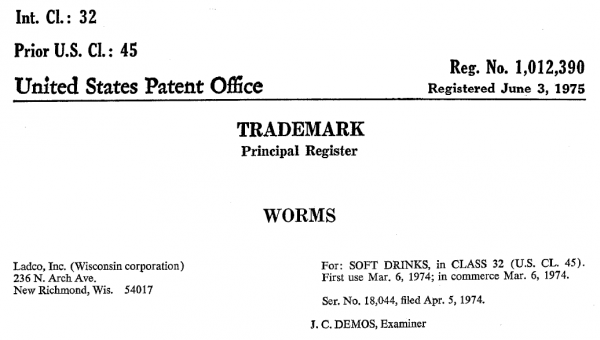 Whoever wrote the copy for the packaging put this explanation about the “WORMS” name on the front of the can:

A specially blended quality carbonated soda with a taste so new and exciting that it required a name just as unusual as our soft drink.

But what LADCo never acknowledges on their can is the product’s geek appeal. Just ask yourself, what demographic of consumer wants to consume worms?

I LIKE WORMS SODA POP
I have a weird relationship with collecting. … Like this “I Like Worms soda. The point isn’t to have this great can, the point is that this is a possibility, a cherry soda for gross little boys. 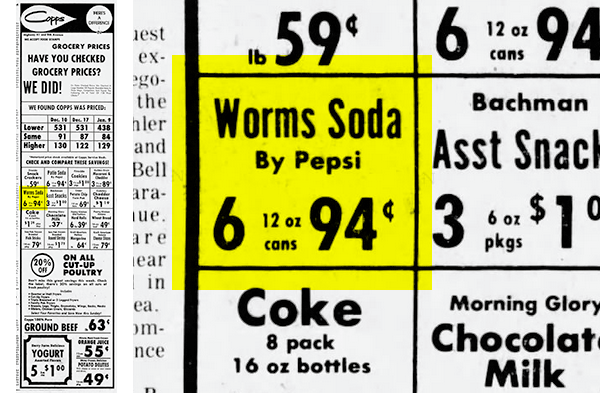 I found a mention of “Worms Soda” in in a 1975 supermarket ad published in the Oshkosh Northwestern. Here, they call it “Worms Soda by Pepsi” although there’s no evidence that Worms was ever really a Pepsi-Cola product. It seems more likely that Larry and Duane were able to use their Pepsi connections for manufacturing and distribution. And felt free to use Pepsi’s name in this way.

They also produced some television commercials which (sadly) I have not been able find.

40 Years ago
Barry Zevan the Weatherman, from KSTP TV, acted in several comedic commercials for Ladco Co.’s Worms soda, a venture by several local entrepreneurs. Zevan was shown dressed up as a big bird, next to a six-pack of worms.

And, yes, I spent hours trying to turn up a video or a photo of Barry Zevan wearing a big bird costume. To no avail. A real can of worms. (And by “real” I mean figurative.)

Can of Worms (the song)