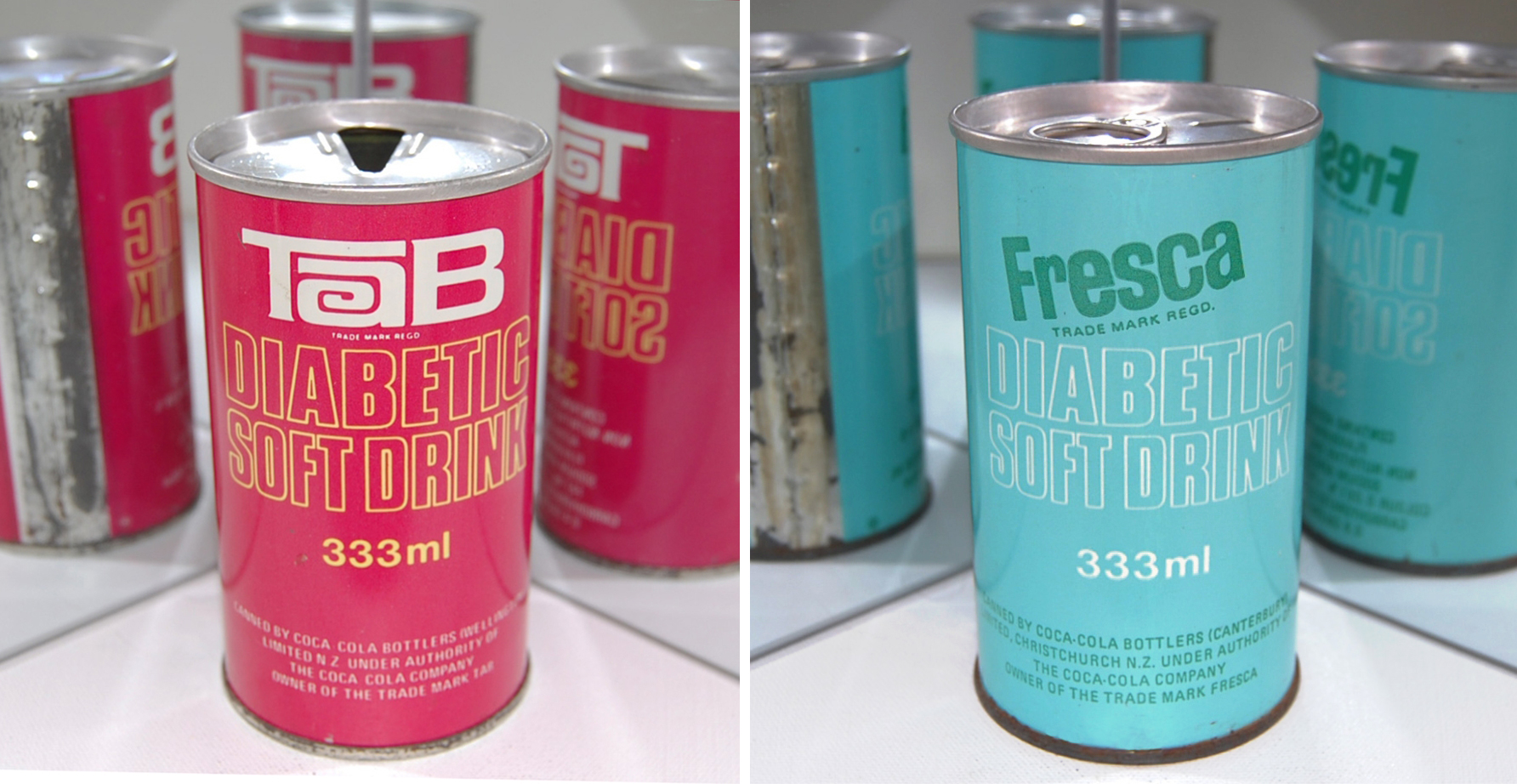 How should we parse that phrase? Are these soft drinks for diabetics? Or are these soft drinks that are, themselves, diabetic? It’s a bit like the phrase “Healthy Foods” that so many brands use in place of the more grammatically correct “healthful foods.”

Except that, in this case, the Coca-Cola company cobranded their sugar-free TaB and Fresca brands with a disease.

Why would they have done that? Because, at that time in New Zealand, certain regulatory anomalies were in place requiring that diet soft drink manufacturers label their products in this way.

What regulations, precisely? (Asked and answered, after the fold…) 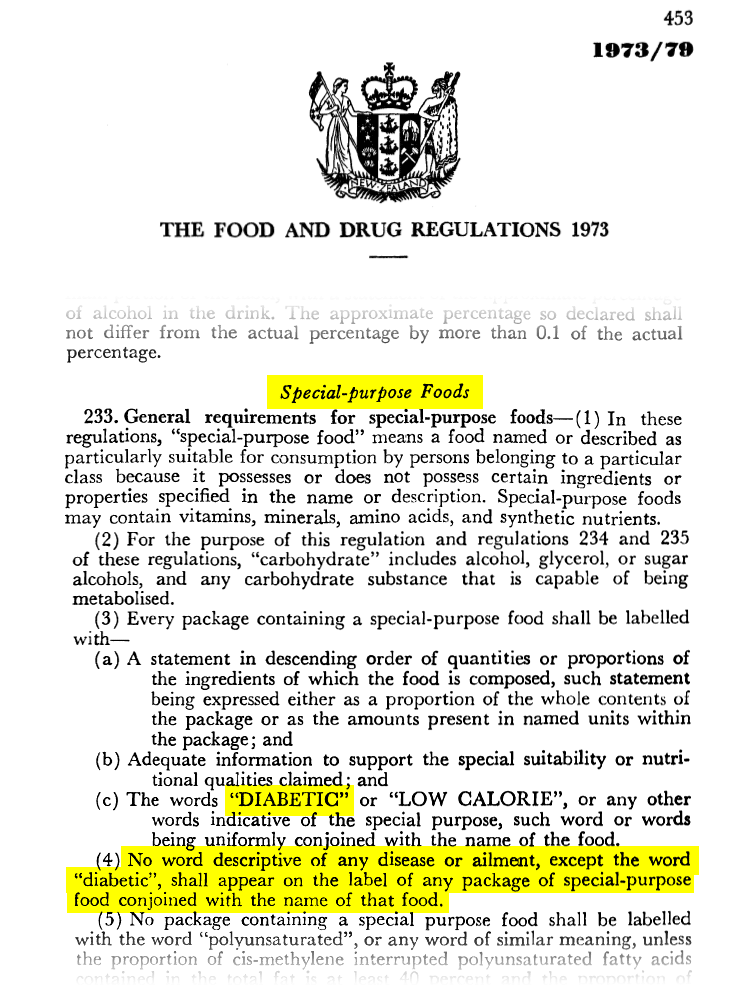 I flailed around for quite a while on Google Books, searching for the relevant New Zealand regulatory documents.

Where the United States, actually prohibited the use of the word “diabetic” in food product names, New Zealand (in the regulation shown above) seems to have done just the opposite. At least for a time.

The term “diabetic,” “for diabetics,” “diabetes,” or the like, shall not be included as part of the name of any food, or otherwise be included on the labeling…

The Code of Federal Regulations of the United States of America, 1980

No word descriptive of any disease or ailment, except for the word “diabetic”, shall appear on the label of any package of special-purpose food conjoined with the name of that food. 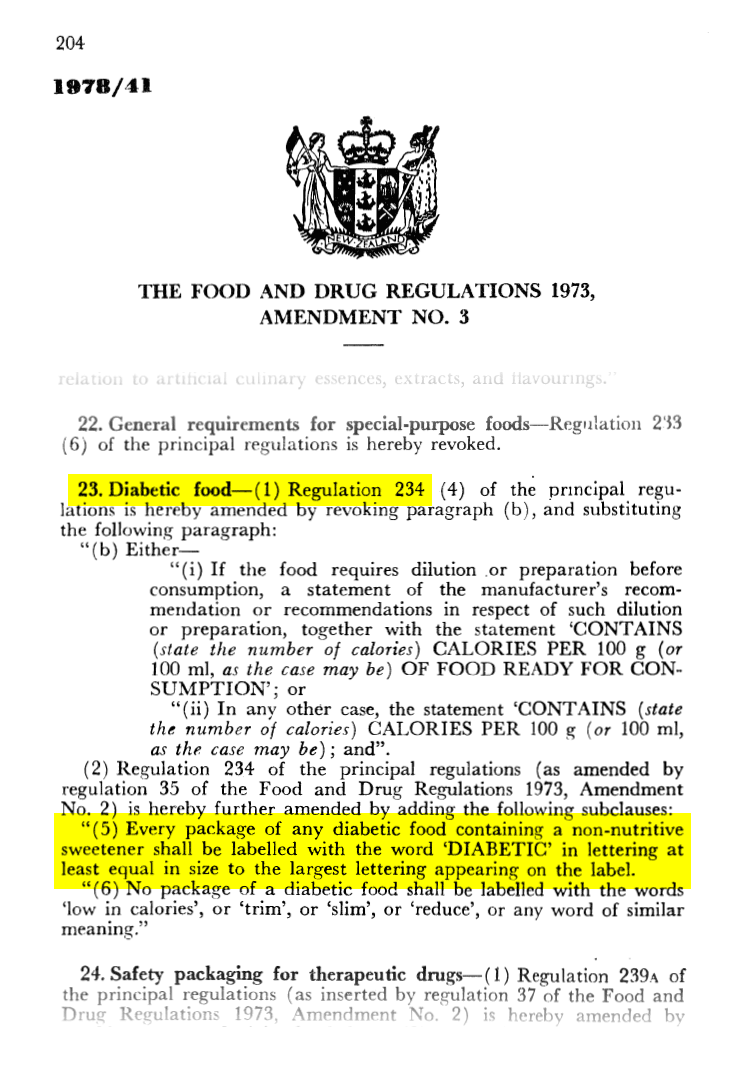 Above, I found this later, 1978 “Diabetic Food Regulation 234” requiring that…

Every package of any diabetic food containing a non-nutritive sweetener shall be labeled with the word ‘DIABETIC’ in lettering at least equal in size to the largest lettering appearing on the label. 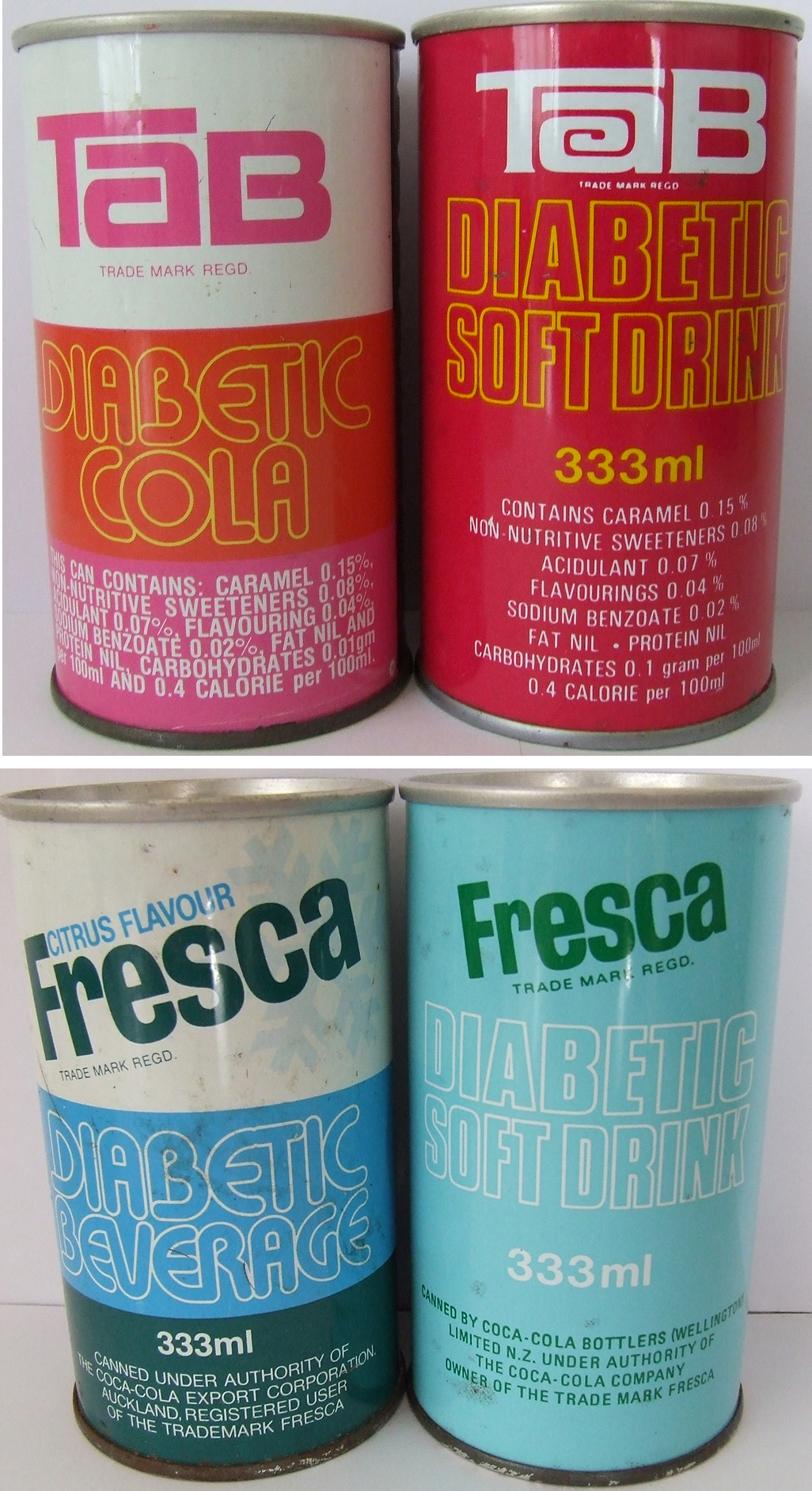 Surprising that Coca-Cola made matching cans for two different brands. It’s almost as if the package designer had followed some diabetic packaging style guide. Fresca and TaB start to look more like product varieties and less like brands, in their own right.

Here in the U.S., Coca-Cola frequently advertised the two products together, although never with coordinated, matching package designs.

For the earlier 1978 cans on the right, they used an outlined Helvetica compressed.

But later, when they updated the packaging, they changed the font to an outlined rounded font. (Anyone know what font that is?) The letter forms are similar to Bauhaus, but the “D” and the “B” have that overlapping detail.

Technically the designer followed New Zealand’s rules in the sizing of the word “DIABETIC.” I suspect, however, that they deliberately chose the white outlined fonts to make the disease name less prominent. If you look at these cans from a distance (or squint), all you can really make out are the TaB and Fresca logos.

NOT RECOMMENDED FOR CHILDREN… 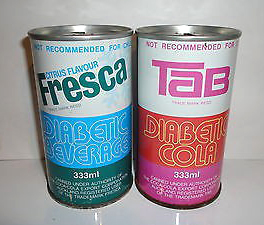 I found another small photo on Worthpoint from a 2014 eBay auction. These cans look identical to Steve William’s later cans (shown above), except for one thing.

They’re each wearing an additional warning line at the top that appears to say, “NOT RECOMMENDED FOR CHILDREN…” You can’t tell from the photo if this is the entire statement.

I searched on the NZLII database for the revised regulation that might have prompted such a change and found this: 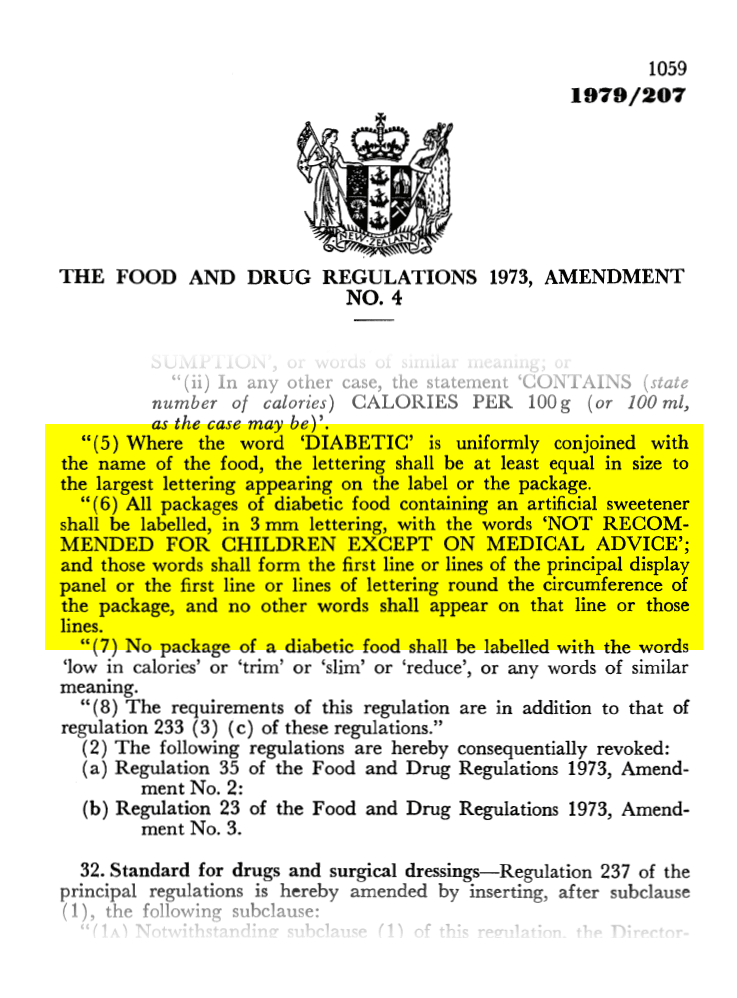 So, one year after the 1978 regulation, in 1979 they revised their Diabetic Food labeling rules, requiring an additional line of words at the top of the package (or around the circumference):

NOT RECOMMENDED FOR CHILDREN EXCEPT ON MEDICAL ADVICE 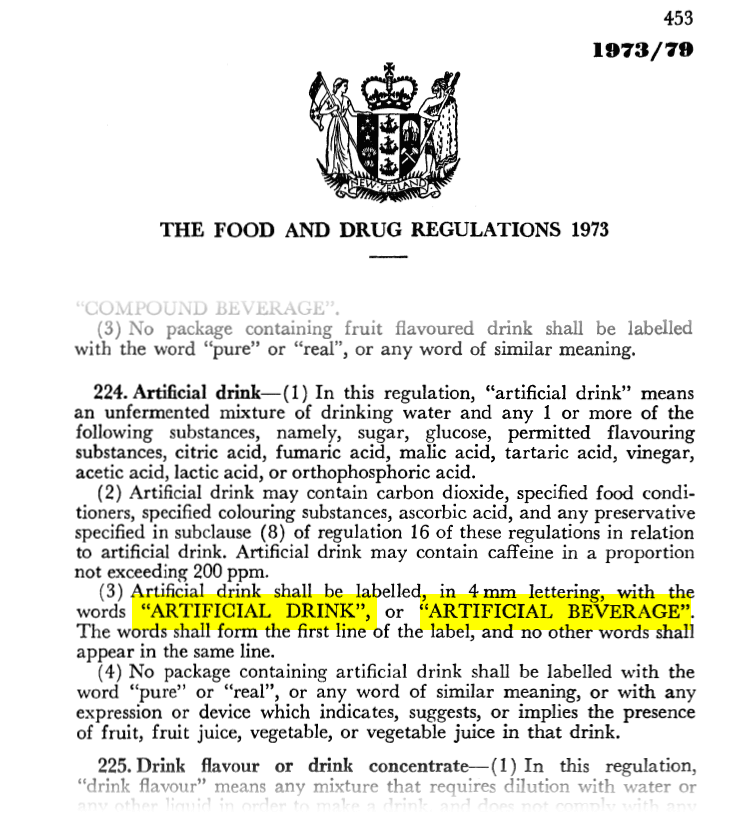 According to one urban legend, Coca-Cola had coined TaB’s brandname as an acronym for “totally artificial beverage.”

In fact, the name was selected from a mainframe computer’s list of 300,000 possible letter combinations.

The earliest reference that I could find to TaB as a “totally artificial beverage” is a humorous 1985 newspaper column by Linell Smith. She entitled this column So Good, so Totally Artificial. It was published in Baltimore by The evening Sun.

While incorrect, the acronym story makes you wonder whether the company had to make a difficult choice in New Zealand. Which was worse? To become an “artificial beverage” (thereby making this fictitious acronym all the more believable) or to be branded as a “diabetic soft drink”?

In America, TaB and Fresca’s contemporaneous American packaging said: “artificially sweetened carbonated beverage.” While in New Zealand it willingly branded these products in in a more medicinal manner.

On the other hand TaB, the brandname…

…is a little suggestive—if one thinks of of tablet—of the medicinal.

In fact, when Coca-Cola registered its 1963 Australian trademark for TaB, it did so in the class of “Pharmaceutical Products.”

The logos and coloration of the New Zealand “diabetic” TaB and Fresca cans do bear a resemblance to the U.S. packaging. Adding the word, “DIABETIC” to the product name, however, was totally antithetical to its usually dietetic branding. (Totally Antithetical Beverage?)

Meanwhile back in the states…

I became diabetic, right around this same time, in my last year of college. Here in America, however, these products were not marketed to diabetics like me. They were targeting the much larger, mainstream demographic of people striving to stay or to become slim. 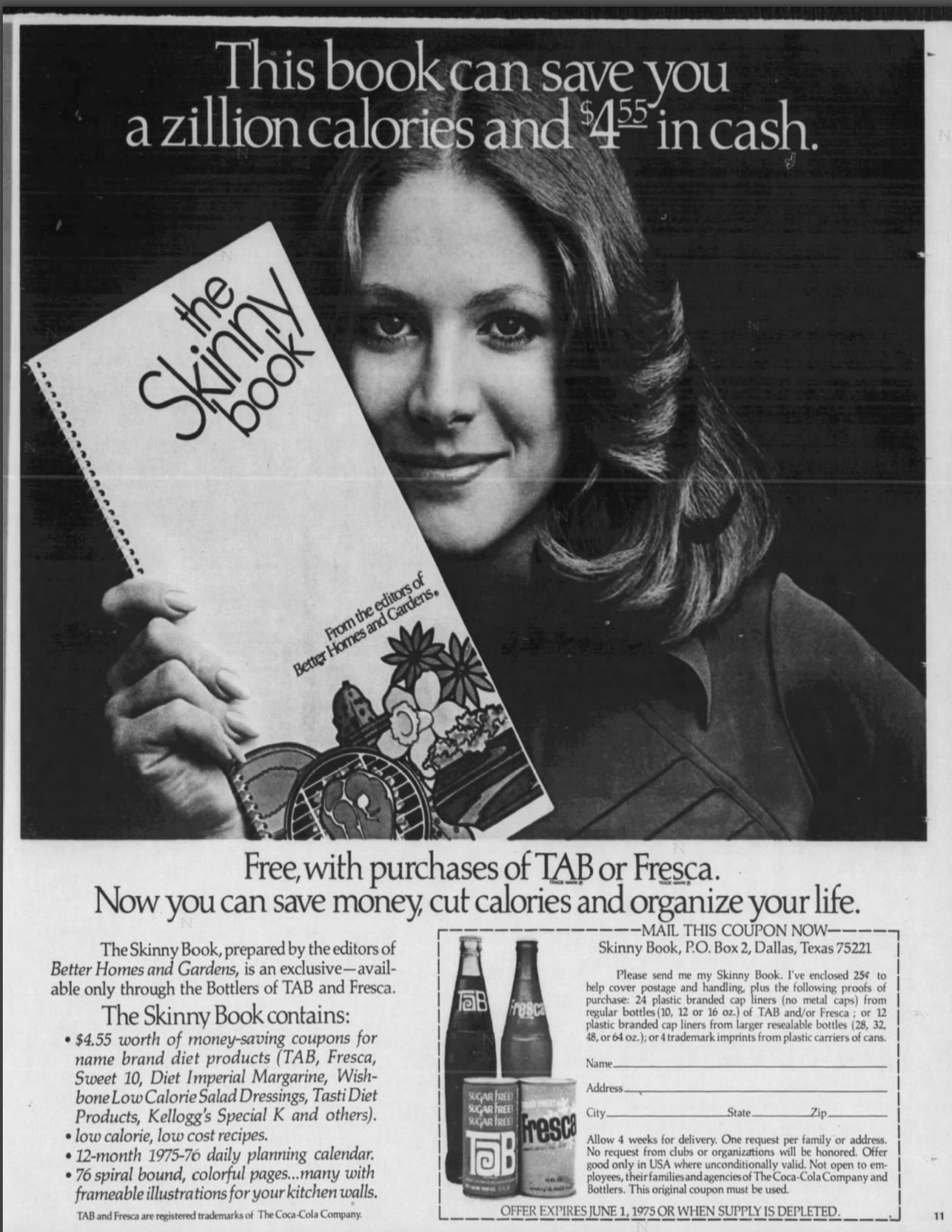 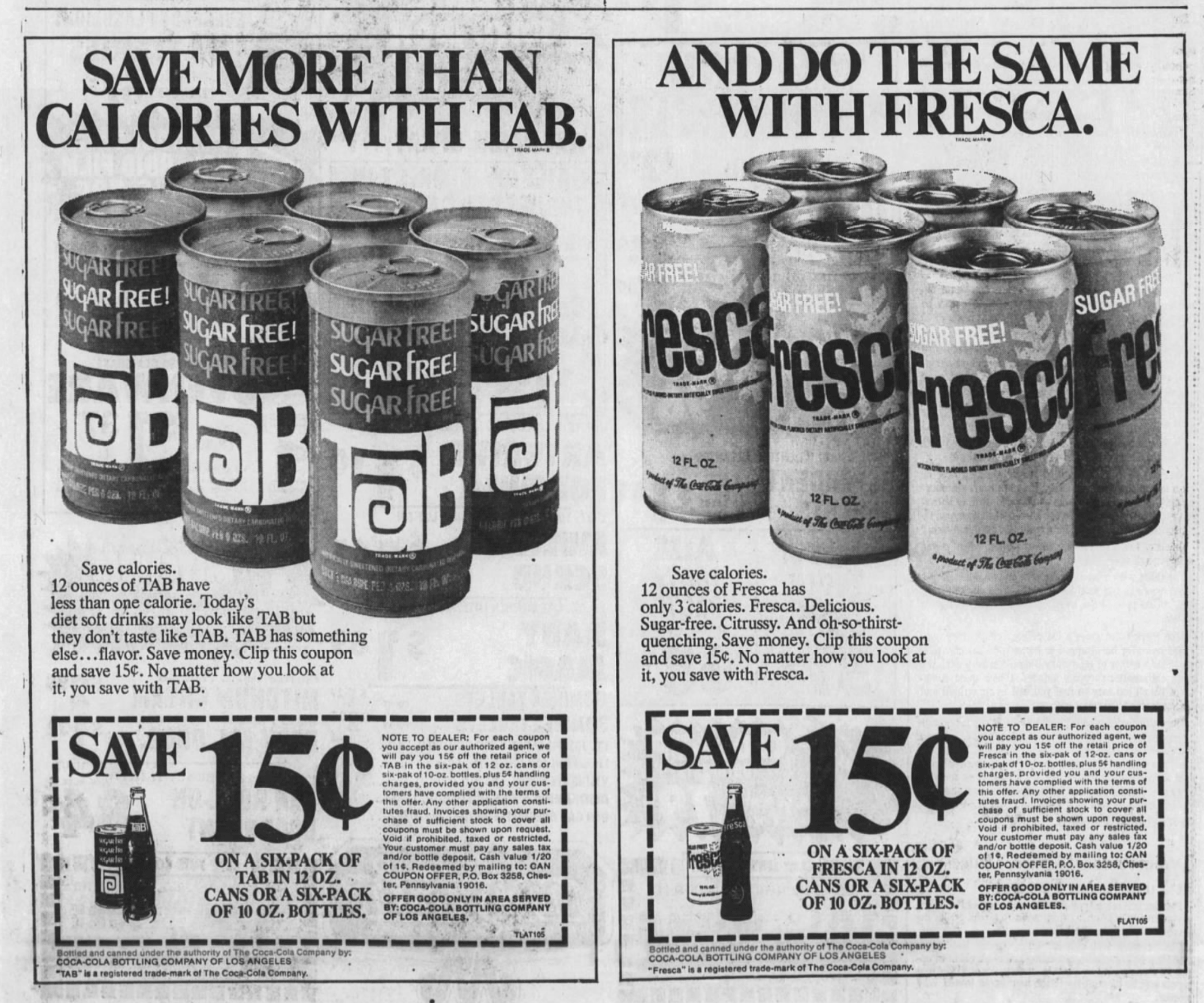 And so we begin a series of posts that we are required to call: “DIABETIC Branding Week.”