Decades before the two recent unisex fragrances that we featured last week (each being marketed with negative declarative statements, based on Rene Magritte’s painting of a pipe) there was Elsa Schiaparelli’s pipe-shaped bottle for “Snuff” perfume, launched in 1939.

Ostensibly a men’s fragrance, but, according to Vogue, woman liked it, too.

Then came Snuff, a revolutionary men’s fragrance in a Magritte-inspired crystal smoking pipe that appealed to women, too. “The unisex concept was important to her,” explains Schiaparelli’s Cédric Edon. “She always thought that women could do things that were traditionally reserved for men.”

Schiaparelli’s instant affinity for the Surrealists may have reflected an understanding that from its inception the movement had one foot in the department store window. One of her perfumes, Snuff, came in an amber-colored bottle in the shape of a tobacco pipe set in a cigar box. It was Magritte’s painting of a pipe titled “This Is Not a Pipe,” and it is just that: a pipe that is not a pipe. Today it would easily pass as a work of Conceptual Art.

Unlike the more recent Treachery-of-Images meme, Schiaparelli’s pipe-shaped “Snuff” bottle did not come with any caption stating what it was not.

A tobacconist’s mixed metaphor dream, it was a perfume named after “snuff” — the nasally-ingested tobacco — contained in pipe-shaped bottle, which came in a container designed for a third type of tobacco: a cigar box. (photo on left via: Live Auctioneers)

The graphics on the box (and apparently the bottle itself) were designed for Schiaparelli by Fernand Guérycolas, a painter as well as a package designer.

an unopened “Snuff” for men, circa 1940, clear glass flacon in the form of a pipe (via: Live Auctioneers)

I found this pipe-in ​​bottle on a beautiful day, in a beautiful specialty shop in Montmartre. I was there for only three weeks. I was looking for the Snuff scent for years. It was created by Schiaparelli in the 30’s. I love these kind of d’objets détournés [diverted objects?]. They inspire me. It is a surreal object, obviously connected to Magritte.

Barnabé Fillion, Snuff reminds me of the streets of Tangier, Libération, February, 2016

a disassembled Schiaparelli pipe-shaped “Snuff” bottle (sold for $60.99 on eBay)

It not a “twist off” cap, but a bottle stopper disguised as a pipe stem.

In addition to designing the pipe-shaped bottle, Fernand Guérycolas also did the illustration depicting it in ads showing a woman’s hands presenting the package to a disembodied male glove. (see also: “Smell the Glove“)

As to, Loewy’s bottle design… 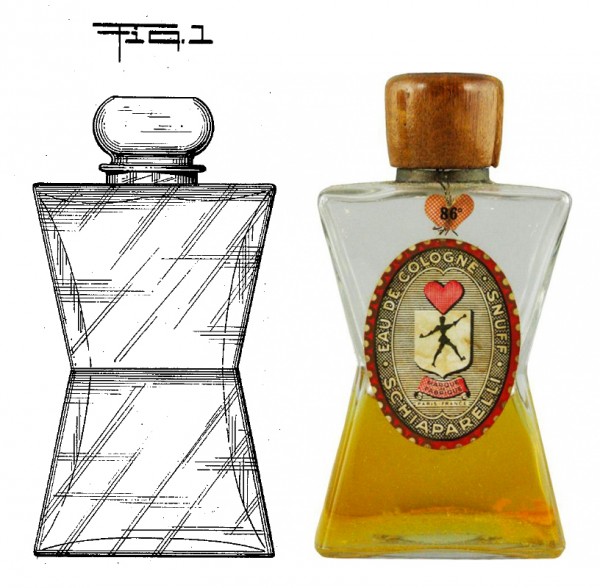 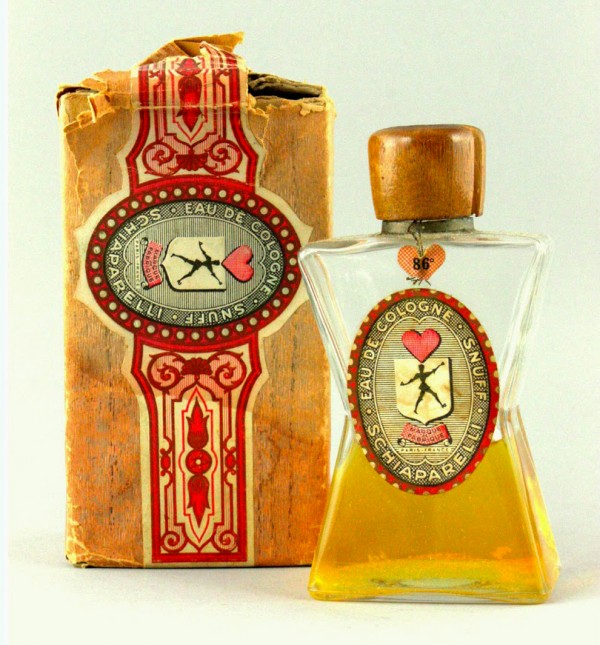 Eventually the “Snuff” brand was expanded to include a number of other men’s products. Loewy’s bottle design figured prominently in this product line expansion. And even though the Loewy bottle was not pipe-shaped, it still came in a box with Fernand Guérycolas’ cigar band graphics.


There was also a Snuff brand soap.

Schiaparelli adds a big, chunky cake of Snuff soap to her line of quality toiletries for men just in time for the Christmas gift trade. Like the other Snuff products, perfume and eau de cologne, the soap is packaged in a modern version of a cigar box. This one happens to be a sleeve box covered in a simulated wood-grain paper. The huge cake of soap is tightly wrapped in cellophane and finished off with an attractive oval label. The outer wrap is an all-over pattern paper sealed with the distinctive “S” seal, for Schiaparelli.

Later advertisements for the Snuff product line were illustrated by Marcel Vertès and featured depictions of the pipe-shaped bottle, as well as the bottles designed by Raymond Loewy.

Schiaparelli’s “snuff” color is dun-colored beige with a great deal of gray in it.

So there you have it. “Ceci n’est pas” week is now done. Ceci n’est pas le semaine. Any longer. In the process of writing the last 5 posts, I decided that the subject warranted its own category. As of today, there are now 11 posts on box vox that go there, including (for example) Pipe Shaped Bottle | Bottle Shaped Pipe.