Alfred Gartner’s 1918 patent for his explosive patriotic packaging is something I’ve been saving for 4th of July.  His “Container for candy, nuts and the like” with fuse and small explosive charge— a “confection explosive bomb”—was actually invented, not for the 4th of July, but for World War I.  (“On to Berlin” being a popular slogan of the time)

For improvements in containers for nut, candy and the like, Alfred Gartner, of 606, 9th Street, N.W. Washington, D.C., U.S.A., has been granted Letters Patent No. 118,798. The invention consists in the improved container, and in the employment of a predetermined amount of explosive for effecting a gentle rupture or a removal of part of the container, so as to avoid scattering of the contents.

Interestingly, Gartner also had a string of other patriotic, war-time inventions, although it’s uncertain if any were ever manufactured.

Curious about his background I tried to find out more about Alfred Gartner, but my research raised more questions than it answered…

Was this the same Alfred Gartner who was an attorney, disbarred in 1918 from practicing before the United States Patent Office “for gross misconduct?”

Was this the same Alfred Gartner who was a grifter arrested in 1913 for defrauding a repertory “show of midgets” with his $5,000,000 “Civic Circus” scheme?

(More details, after the fold…)

The invention consists in the improved display device, combining means having an exposed question and movable means constituting concealed answer, together with illustrations, mottos, words, etc.

… in any shape desired, but preferably in the shape of a cartridge… 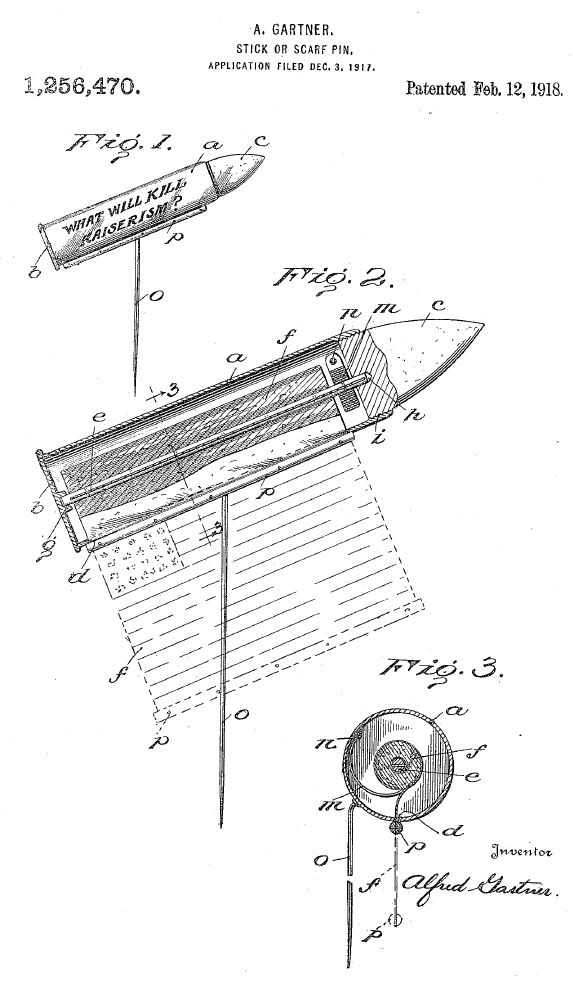 Then there was his other “Display Device” from 1917…

…primarily intended to be used for post card purposes.

The prime object of the invention is to provide a unique and attractive display device and one which in addition is instructive and productive of encouraging patriotism.

… a display device in which canceled stamps of a set or group of allied countries are provided with legs and feet and are marching on to a country, also represented by a canceled stamp. 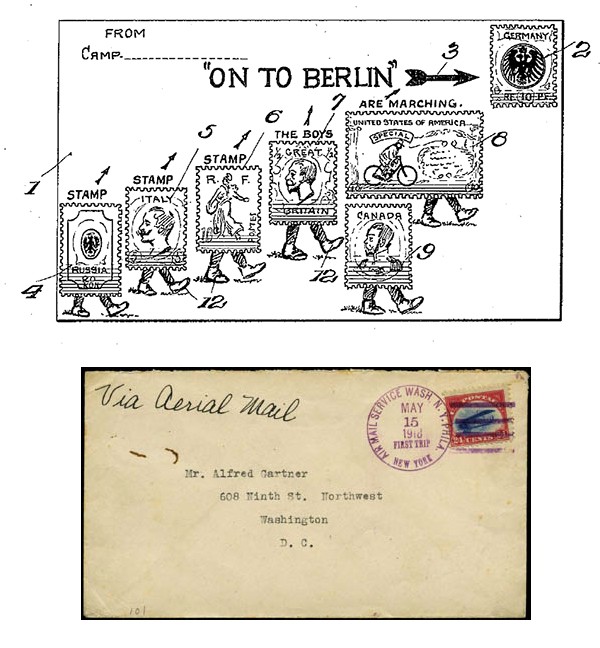 The cancelled stamps marching “on to Berlin” together with the existence of the collectable cover above (addressed to Gartner) suggest that he was a stamp collector.

Four years earlier there was a stamp-collecting Alfred Gartner, residing in NY and NJ who was indicted for theft in connection with a proposed “Civic Circus.”

A 1913 NY Times article about his arrest appears on the right.

Is this the same guy? 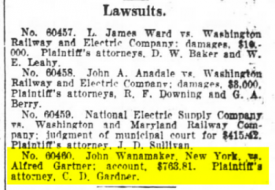 And is our explosive packaging inventor the same Alfred Gartner  who was sued in 1917 by John Wanamaker? And was that the same John Wanamaker who was a former Postmaster General (in office 1889–1893) and founder of Wanamaker department store—inventor of the price tag?

(Fun fact: During World War I, Wanamaker publicly proposed that the United States buy Belgium from Germany for the sum of one-hundred billion dollars, as an alternative to the continuing carnage of the war.)

So many questions, right?