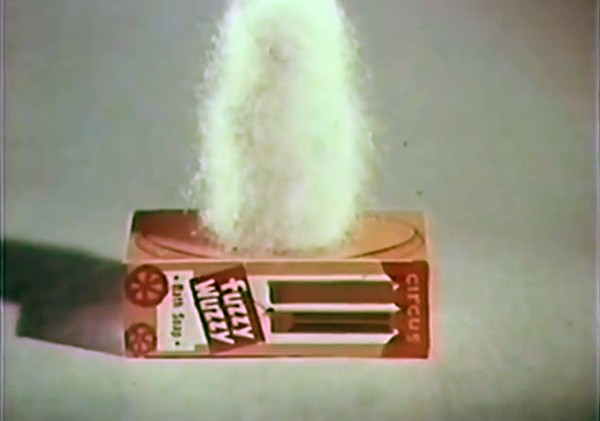 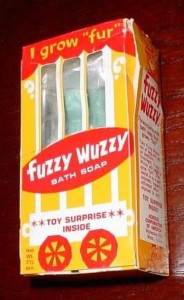 Fuzzy Wuzzy was an odd soap from the 1960’s. Shaped like an animal, packaged in an air-tight plastic pouch, the soap would acquired a “fur” when exposed to the air.

A self-rhyming brand name, “Fuzzy Wuzzy” was registered as a trademark for soap in 1966 by Aerosol Corporation of America.

Sold in a circus-wagon shaped carton with a die-cut window (resembling “cage bars”) and a circus platform depicted on the back of the box. This panel of the package was a sort of a staging area where kids were instructed to “set” their “bald” soap animal in preparation for the furry transformation that would soon take place.

A perforated punch-out was included on this panel with instructions to “PUSH OUT THIS TAB AND INSERT BASE OF FUZZY WUZZY.”

The question we seek to answer today is two-fold:

1. the inventor of Fuzzy Wuzzy: who was he?

2. the package designer for Fuzzy Wuzzy: who was he?

While box vox does not claim to have all  the answers, we’ve learned this much: if you choose an obscure enough topic, you can pretty much tell any shaggy dog story you wish. Which is not to say that we lie. Or that there is no interest in Fuzzy Wuzzy bath soap and the technology behind it.

Some have wildly assumed that the 1966 product manufactured by Aerosol Corporation of America contained live mold spores. (Wrong.) Others have correctly surmised that the soap’s fur is a form of crystallization: efflorescence. 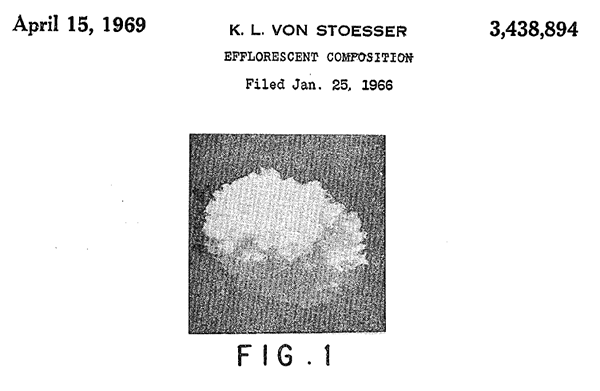 While we found no hard evidence linking Von Stoesser’s patents to Aerosol Corporation of America, it’s abundantly clear from reading his patents that the whole idea of an animal-shaped soap that grows efflorescent fur, was his. 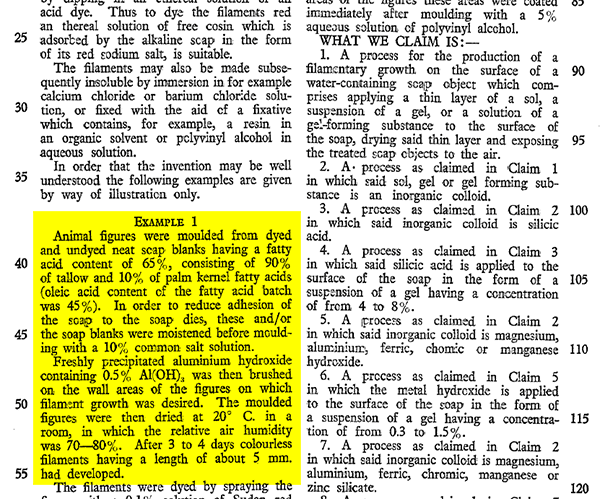 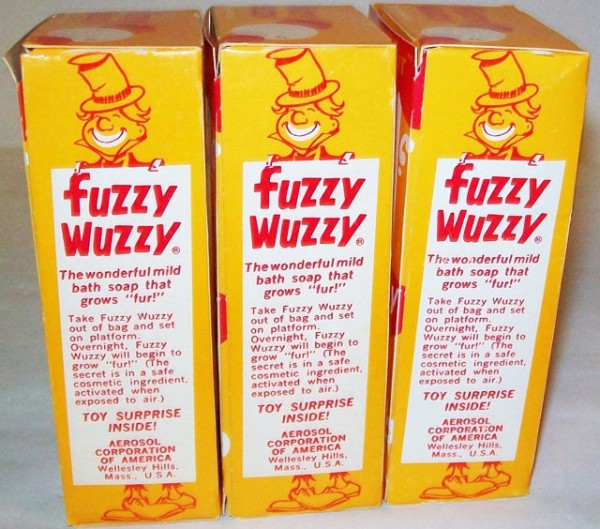 Many have have wondered what secret ingredient Fuzzy Wuzzy bath soap might have contained. The side of the carton says only that “the secret is in a safe cosmetic ingredient activated when exposed to air.”

How safe was it?  While we have not turned up any FTC or FDA documents citing hazards in Fuzzy Wuzzy bath soap, there was this troubling 1966 newspaper clipping from Pennsylvania.

The Wilkes-Barre Health Department Friday ordered a soap product manufactured by Aerosol Corporation. removed from the shelves of stores because it was considered “dangerous.”

…Pugh said barring of the product came after a Dallas woman complained to the State food inspector about the soap. She said her 17-month-old boy chewed the head off the soap “animal.” The baby became ill with a sore throat and his mouth started to swell. She said the child was taken to a doctor and then placed in a hospital for three days.

Directions on the soap state when it is taken from the air-tight bag, it will begin to grow “fur.” Within three days the directions state, the soap will have a “fur coat.”

It’s interesting that the article implies a connection between the toddler’s 3 day hospital stay, and the 3 day fur growth period mentioned in the Fuzzy Wuzzy soap commercial. As if to suggest that it was the 3-day-long “Fuzzy Wuzzy” chemical reaction that determined the length of the poor child’s hospital stay.) 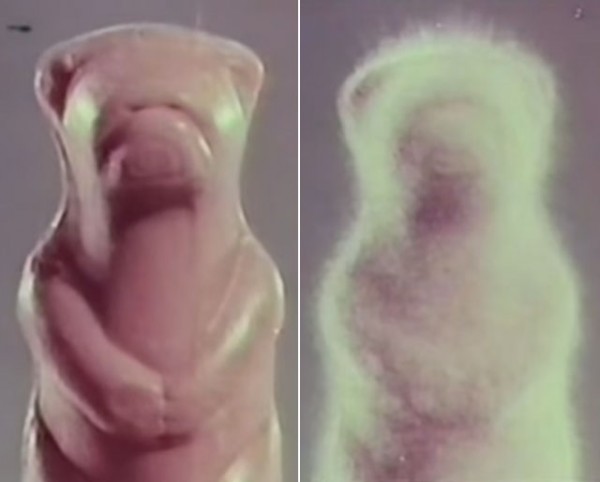 Fuzzy Wuzzy before and after exposure to air (photo via: via: BlazenFluff)

OK, we’re going way out on a limb here…

2. The designer of the Fuzzy Wuzzy bath soap circus carton package might have been Carl Seltzer.

He may seem like a counter-intuitive choice. The examples of his work we’ve seen in the past (the diet ice cream carton and the United Semiconductor logo) are a world away from this type of 1960s kid packaging.

The one tenuous filament of connection between Carl Seltzer and “Fuzzy Wuzzy” resides in a flat file at the William Andrews Clark Memorial Library, UCLA.

The collection of Patrick Reagh’s Press consists of ephemera, page and galley proofs, printing plates, and various items relating to printing. The collection is contained in 111 boxes. Filed in folders, the archive contains the paperwork concerning the production of books, letterheads, designs, and letterpress items.

No one here has traveled to Los Angeles to actually look inside “Box 58, Folder 20” but the online finding aid describes its contents as:

Yes, we’re really only guessing that this printing project was the packaging for Fuzzy Wuzzy Circus Bath Soap. It might have been a later (non-circus) redesign of the packaging. Of course, “galley proofs” refer to pages of a publication. So maybe it’s a Fuzzy Wuzzy bath soap catalog? Or it could an entirely different project, coincidentally entitled “Fuzzy Wuzzy” that has nothing at all to do with the soap brand.

Is the Carl Seltzer connection is a red herring? Maybe the circus box was designed by Wellesley Advertising Associates…

I don’t know. Maybe we should wash our hands of the matter.