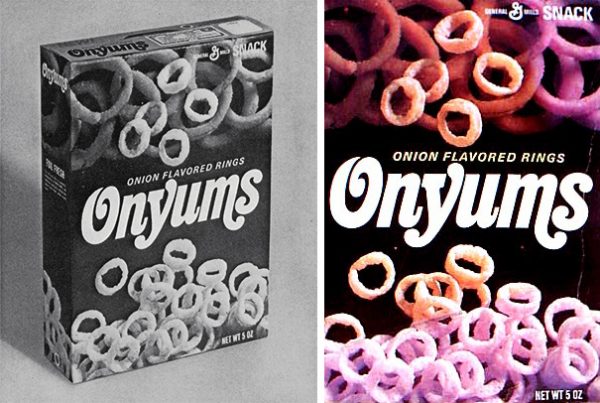 In honor of Robert Sidney Dickens Week (here on box vox) I’ve been looking for some good examples of packaging designed by the Dickens Design Group.

I found the adjacent color photo at Tick Tock Toys — Dan Goodsell’s online archive of vintage commercial ephemera. Goodsell had also posted another photo of the same box (below) on his Flickr site. 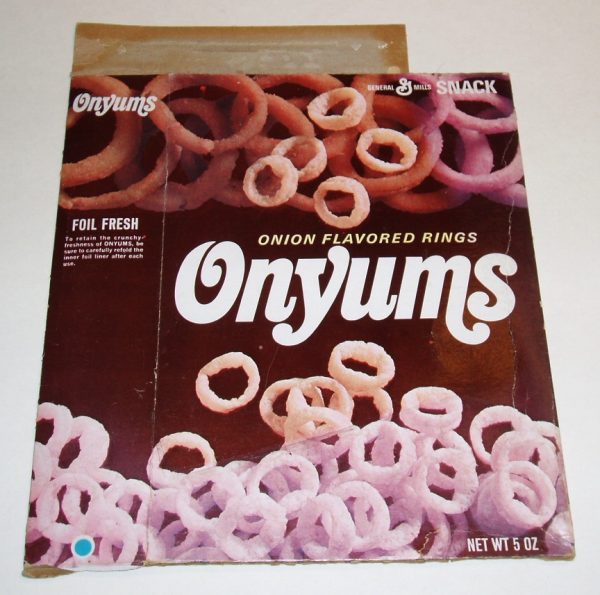 Chicago-based food photographer,  Allen Snook took the photo that appears on the box of the onion-ring-resembling product. The pink and purple coloration of the image initially stuck me as an unusual choice. On closer inspection, however, I decided that the yellow ink in those areas must simply have faded over time and that purple and pink onion rings did not appear on the original box.  Although I haven’t been able to find any other color images of the packaging to really confirm this.

I like the abstract composition of Snook’s photograph — Onyums above and below. And, of course, we appreciate the way the photographer left an empty dark area for the product trademark.

According to Graphis Packaging 3, Dickens, himself, served as “art director” for the project. Also cool: the chunky, 60s/70s style typography of the logo with its oniony spiral “O.”

More about the product, after the fold… 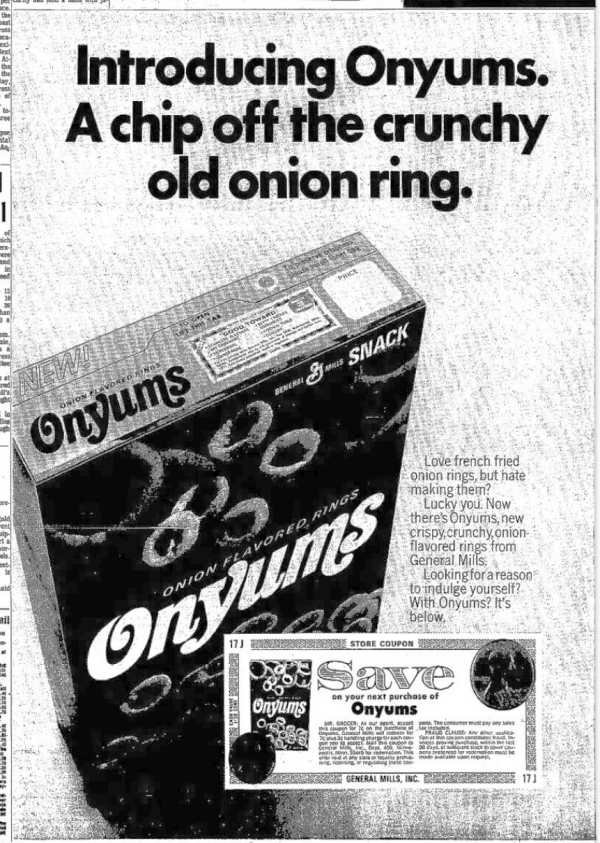 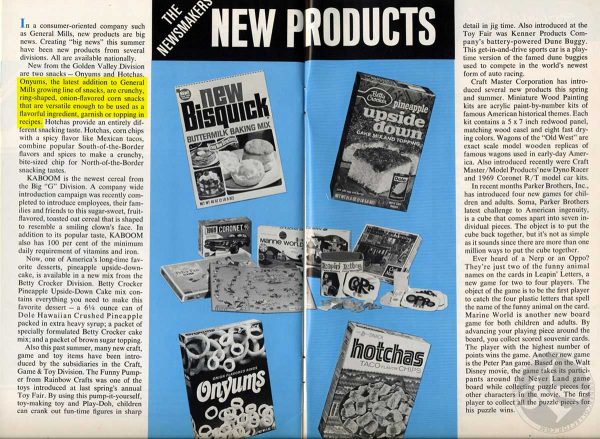 General Mills published this double page spread of new products in a 1969 issue of their shareholders magazine, “Horizons”

General Mills applied for trademark protection of the ONYUMS name in 1969 and got it by 1970. They had obtained a trademark for the similar-sounding brand name, UNYUMS, in 1966. It took the company a couple of years to get their new onion-flavored snack formulation ready and then they decided to change the name from “UNYUMS” to “ONYUMS” probably to make it look more like the word, “onion.” Changes like this are called “trademark tacking.”

Unfortunately this change served to undermine a future trademark dispute they would have with Frito Lay over Frito Lay’s similar sounding “FUNYUNS” snack brand. In the case known as “General Mills, Inc. v. Frito-Lay, Inc.” the court decided that: “Funyuns” does not so resemble “Onyums” that confusion is likely.”

General Mills decided to modify the trademark “UNYUMS” to “ONYUMS”.  … [They] conducted a test to measure the impact of different package designs for the “ONYUMS” product… The package recommended as a result of this test was not adopted because the philosophy of promoting snack products in General Mills changed from an individual styling to a line philosophy in which all snack products were to look somewhat alike in package design and advertising motif. 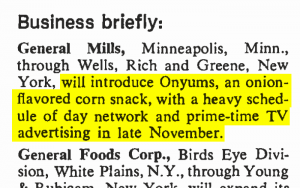 General Mill also produced a television spot for the launch of the product. The 1969 issue of Broadcasting magazine tell us that the ad was handled by Wells, Rich and Greene, but (sadly) I have not been able to find a video of it to watch online.