The Sabritas happy face — a “smiling face device” trademark — is another example of a food brand promising happiness.

Over the years, Sabritas designers have tinkered with their smiling face device.

We have the current Sabritas smiling face logo shown in the small thumbnail above, left. Two calligraphic black strokes form the shape of the face with some locks of dark hair on the forehead. The Sabritas logo includes all the usual happy face features (eyes, nose & smiling mouth) plus two circular red cheeks.

The logo’s original designer had assembled these features differently.

PepsiCo submitted this 1968 Sabritas chips packet as a “specimen” in one its trademark filings.

The lines started out thinner in this early version of their logo and the Sabritas name was set in a playful 1960s font style.

Over the years, the brand made the lines of its “smiling face device” much thicker.

This bag is empty, of course, but imagine how the chips would look though that smile-shaped window. Showing a glimpse of the product though a window in the package is a nice idea. Chewing with your mouth open? Not so much.

None-the-less, although they changed the face, the Sabritas smile-shaped window appeared on their packaging for several decades.

Printers create windows on transparent bags like these, by masking out all the other areas with an opaque ink. PepsiCo included another, smaller smile-shaped window on the back of this bag.

You may also notice that there is some cross-marketing for Pepsi-Cola on the back of this bag. Two years earlier, in 1966, Frito-Lay and Pepsi had merged to form Pepsico.

By the 1970s, the brand established a heavier logo, with larger eyes and a smaller mouth. 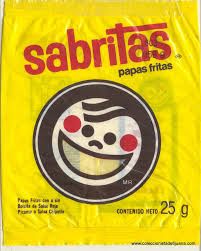 Frito-Lay’s package designers, however, persisted in using the logo’s now smaller smile as a window and, for a while, the logo’s 1960s typography remained the same.

BBDO Mexico claims to have worked with Sabritas since the 1960s. You can find quite a few Sabritas television ads online. Many of these are from the seventies and feature the packaging with the smile shape window. Perhaps they are the work of BBDO Mexico. (Unfortunately, the quality of these YouTube videos is not good.)

Below is a rare advertising photo showing the effect of the product showing in the mouth-shaped window. (via: Dossier IRAM)

Frito-Lay submitted the 1993 pack shown below as specimen in their 2008 trademark renewal.

By this time, they had replaced the interlocking sixties typography with a fairly lackluster italic font and introduced a gradient-striped background.

The back still has a small version of the logo, but its mouth is no longer a transparent window.

At some point, however, Sabritas abandoned their smile-shaped windows altogether. Their current packaging no longer shows the product in the mouth of their smiling face device.

Sabritas smiling face is present throughout Mexico. We can see it on the sides of the corner posts, small shops, racks and packaging. The strength of this symbol goes beyond identifying the company that produces snacks quality. The symbol captures the emotional benefit. They are more than potatoes in a bag. These products make you happy.

“The famous packaging for ugly girlfriends”

In the seventies and eighties, a brand of potato chips in Mexico launched a family size package of chips and had the face of the brand smiling. So obsessed with female beauty, men would joke that if the woman was ugly, but had corpão [a good body] they would buy these potato chips and put the package over her face. (A face that a man would be happy to face.) Even today, forty years later men still make this famous joke. Despite the brand having changed the layout millions of times.

Iara De Dupont
These macho novels are a global plague

I was jogging at a park near home (northwest Mexico City), and… I thought I spotted a “Ruffles” potato chips wrapper from the 1980’s. It was very odd. I picked it up and yes, it was a vintage wrapper! It seemed one of the hills of the park used to be some sort of landfill 30 years ago and some of the earth had moved revealing what I would call “contemporary archaeology.”

Stellar Supreme, The Catch of the Day: snacks wrappers from the 1980’s 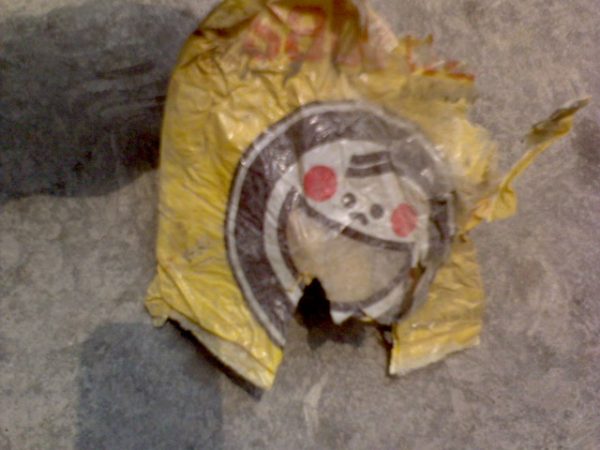 …what I found was a piece of a Sabritas bag.  :D,  it is cool, because nobody has one of these… I liked this envelope with transparent mouth…

The guardians of the image

AWAKE EVERY DAY, AND LOOKING INTO THE MIRROR convinced, in a sort of ritual excellentius Cornejo prophet, “Today I have to smile.”  No matter what happens, you find them with that smile tattooed on their faces as if they were traveling Sabritas packets. However, as some have confessed: “This does not cost us jobs. Rather than mourn at birth, we smile..”

You guessed it: they are the enthusiastic members of the area’s public relations company.