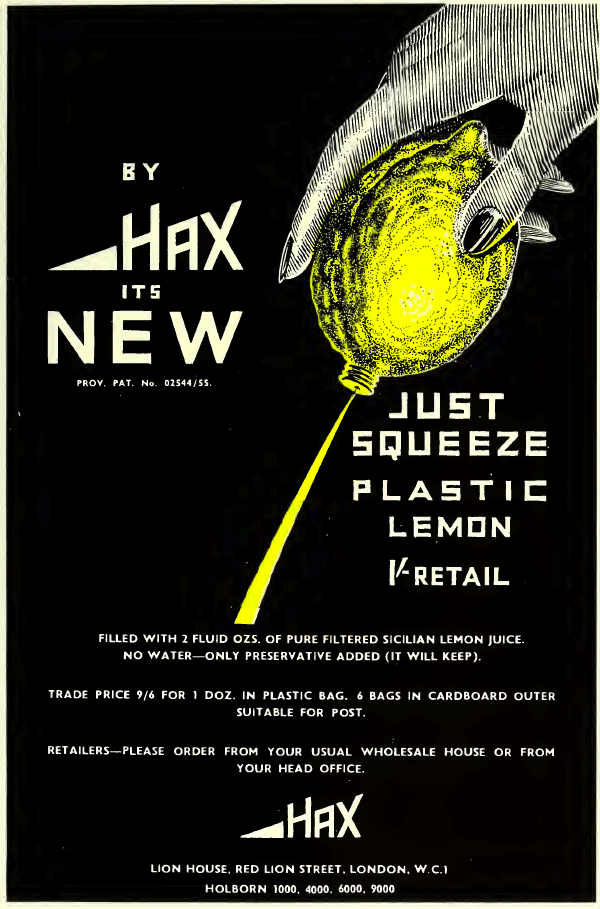 There are at least three different people credited for having invented and/or designed the plastic lemon pack — a lemon-shaped squeeze bottle for lemon juice.

The one that I’d like to focus on today is Edward Hack. Edward Hack’s nearly forgotten brand name, “HAX” was a homonym for his own name. HAX was Hack’s company.

The idea of placing real lemon juice inside yellow lemon-shaped plastic containers was developed in the 1950s by Edward Hack. The actual lemon was designed and produced by Cascelloid Ltd, who maintained that Hack presented them with their perfect model after much searching. They claimed he examined the entire stock of Harrods, Fortnum and Mason’s and Selfridges, as well as three cases of some three hundred lemons each at Covent Garden! It is alleged that the perfect lemon was eventually found at Covent Garden.

The task of actually creating the blow-molded plastic version of Hack’s supposedly “perfect lemon” seems to have fallen to Bill Pugh, Chief Plastics Designer at Cascelloid.

The squeeze lemon, marketed now as Jif, began life as a wooden core carved by Pugh, then covered painstakingly with fresh lemon peel. He cast it into a plaster mould, experimenting until he had it just right. He was patient and a perfectionist.

Once perfected, the lemon-shaped HAX pack began getting some attention in the press…

THE ANSWER’S A LEMON

The neat “Hax” lemon juice pack has won approbation all round. Two fluid ounces of lemon juice are contained in a polythene squeeze type container which is an exactly replica in texture, shape and colouring of an actual lemon. A plastics closure holds two labels, shaped and coloured like lemon leaves, in position and to dispense the juice, the housewife gently squeezes the “lemon,” when the liquid flows drop by drop into the tumbler or cup.

Bottling: A Quarterly Supplement to the Brewing Trade Review, 1954 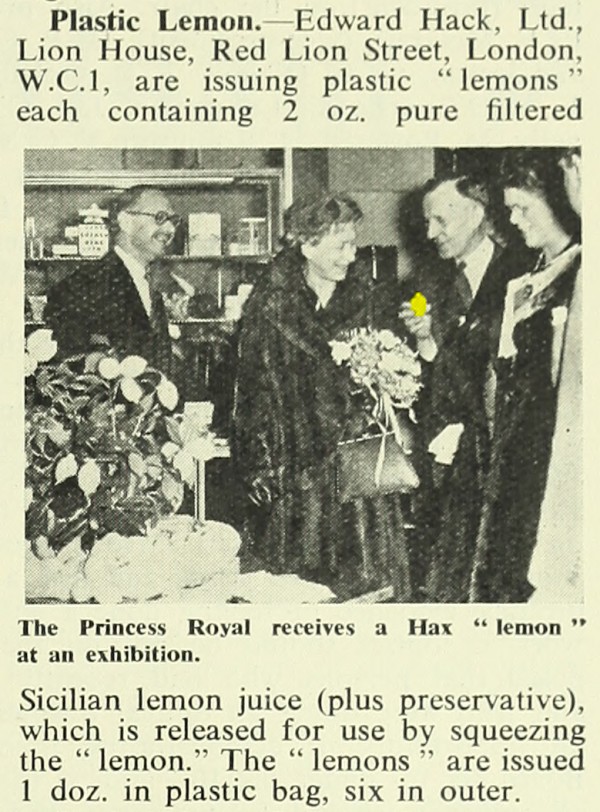 The Princess Royal receives a Hax “lemon” —from The Chemist and Druggist, June 25, 1955

More about the HAX lemon, and its competitors, after the fold…

Shortly after the end of the Second World War such juice began to be sold in Italy in convenient plastic squeeze packs coloured and shaped like lemons and in 1955 a company called Edward Hack Ltd. began to market juice in similar packs in the United Kingdom. Shortly thereafter another company, Coldcrops Ltd., entered the market with lemon juice sold in similar containers. Litigation ensued, Edward Hack Ltd. claiming that Coldcrops Ltd. were passing off lemon juice as and for their produce. That action never came to trial because both businesses were acquired by the respondents who thereafter marketed juice in plastic lemon containers of the Hack design under the brand name “Jif.”

–Lord Oliver of Aylmerton, from UK House of Lords 1990 decision on: Reckitt and Colman Products Ltd v Borden Inc & Others

I wasn’t able to find any images of the earlier Italian lemon-shaped packs mentioned above, but the importance in the UK of Edward Hack’s “HAX” lemon is clear enough. Judging from its 1954 mention in Bottling Magazine, however, it must have been launched one year earlier than indicated above.

The court’s decision states unequivocally that the surviving “Jif” lemon juice brand used Edward Hack’s lemon design, although Wikipedia and others give Stanley Wagner credit for the invention of the plastic lemon container…

The plastic lemon container and the idea of selling lemon juice in this way was conceived by Stanley Wagner, an ex-RAF fighter pilot and an early stalwart of the Frozen Food industry. His plastic lemon was made by a company in the telephone business, Shipton. Over the course of a ten-month period from mid-1955 to early 1956 more than six million of these lemons were sold, initially under the brand name “Realemon” and then after an objection by the then Board of Trade the name was changed to “ReaLem” and marketed with the slogan “juice in a jiffy”.

Mr. E. J. R. Hack (Edward Hack, Ltd.) has donated a gold cup which will be taken as a greeting from the Royal Air Force to the Royal Australian Air Force by the Duke of Gloucester (Governor Designate of Australia) when he goes to the Commonwealth. Mr. Hack holds an honorary commission as Wing Commander in the R.A.F. and has been closely associated with the development of the Air Training Corps.

One wonders whether Wagner and Hack knew each other. And if so, did this make their rivalry more rancorous or less?

It’s also interesting to note how little is made of Wagner’s obvious trademark infringement. Coldcrops, Ltd. initially passed off their lemon juice packs as the American “Realemon” brand and then, “after an objection by the then Board of Trade,” simply shortened the name to “Realem.”

Contrast that with the 1990 hoopla that ensued when Borden tried to introduce a lemon-shaped Realemon pack into the UK market. 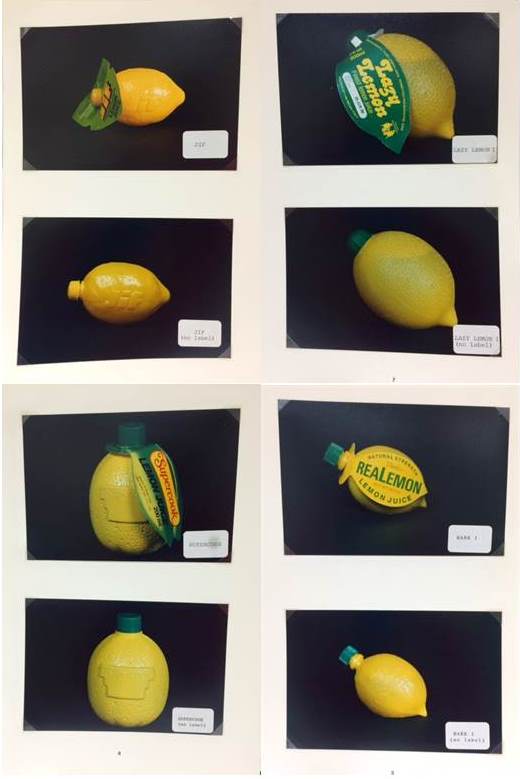 What the appellants did was to make preparations for the launch on the United Kingdom market of lemon juice to be sold in natural-size lemon-shaped plastic squeeze containers which would compete directly with Jif lemons.  …between the summer of 1985 and the summer of 1986 the appellants produced three different versions of plastic lemon containers (referred to respectively as “Mark I,” “Mark II” and “Mark III”) which they proposed to launch on the market. They did not, however, undertake any prior advertising campaign with a view to familiarizing the public with their product in its new get-up. The Mark I container was slightly larger but broadly similar to the Jif lemon, save that it had a green cap in place of the yellow Jif cap and a small flat area on one side which enabled it to stand at an angle on a surface.

–Lord Oliver of Aylmerton, from UK House of Lords 1990 decision on: Reckitt and Colman Products Ltd v Borden Inc & Others 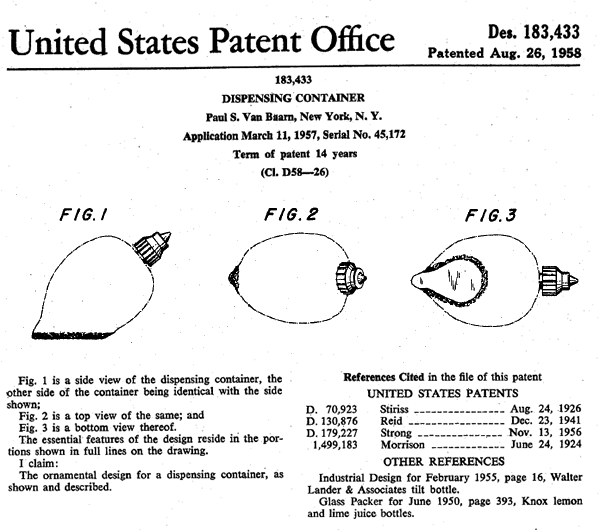 In America, Realemon did not put their reconstituted lemon juice into lemon shaped packs until 1957, with several brands beating them to the punch. The 1958 design patent for their version is shown above. (Note: the reference to the Walter Lander “tilt” bottle) 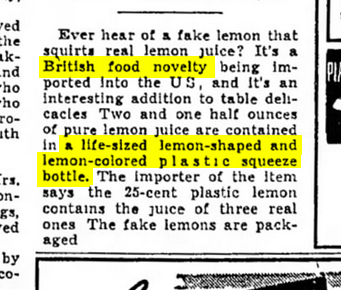 The earliest entries into the American market appear to have been British imports in 1956.

Finally in 1958 Realemon produced its own lemon-shaped package — a package similar to the HAX lemon —and to Stanley Wagner’s Coldcrops pack which, in the UK, had been infringing on the Realemon trademark! 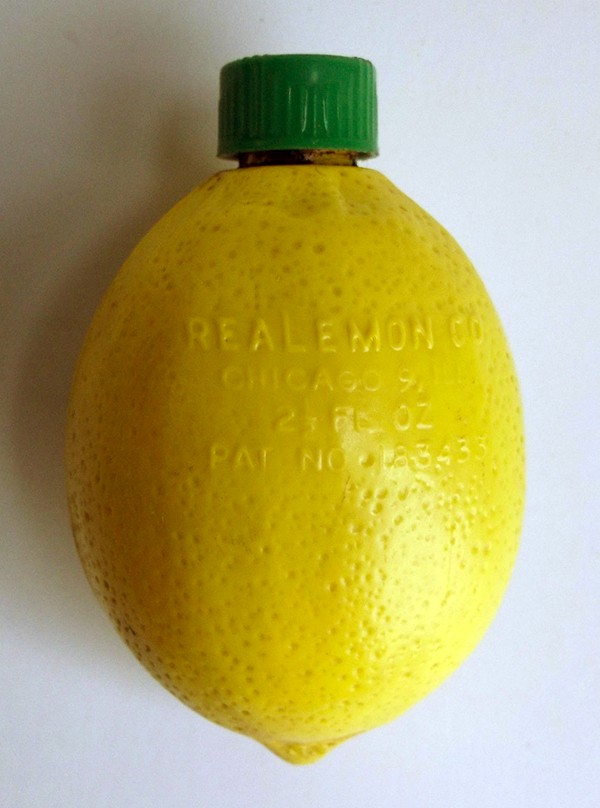 Some have asserted that the lemon-shaped pack could not be patented or trademarked.

Packaging for lemon juice
Reckitt & Colman produced their JIF plastic pack for lemon juice in 1956. The pack is about the size of a real lemon, with JIF embossed on to its textured surface and there is a screw cap out of which the juice is squeezed. The much-admired design was by Edward Hack Ltd. The pack itself was not eligible (nor is it currently) for trade mark protection under UK law. It will not surprise shoppers to learn that rival food firms have tried to introduce similar lemon juice packs. Indeed, two designs, considerable larger in size and of different appearance, have been given royalty-free licences by Reckitt & Colman. However, it came to the firm’s notice in 1985 that a competitor was planning to introduce new lemon pack designs with different trade names but having similarity in size and appearance to the original JIF pack. Accordingly, Reckitt & Colman brought an action for ‘passing off. They won their case in the High Court, despite suggestions that ‘JIF’ had become ‘generic’.

Dan Johnston, 1989
Design protection:
a practical guide to the law on plagiarism for manufacturers and designers

Johnston states that the pack was never eligible for trade mark protection, but in 1954 Hack did  hold a British “provisional patent” for his design — (“Prov. Patent 02544/55” according to the 2-color Hax lemon ad at the top of this post).

This “provisional” patent may not have been fully approved, but was this because it was ineligible? Or simply because the design for the HAX lemon was bought out by Jif?

Lest you think that we’re all sweetness and light about plastic lemon bottles, consider Bill Pugh’s own misgivings in later life about plastic bottles, in general…

Soon after Pugh’s arrival [at Cascelloid], the company imported a plastic bottle-blowing machine from the United States. It was one of only two in the world. Faced with a new machine, a new process, and one trial American mould, Pugh had not only to master the art of making plastic bottles but to sell the idea that they were a good thing. On a Nile cruise with Margaret in later life, he was deeply saddened as hundreds of empty two-litre bottles drifted by. Pugh felt in a way responsible for something he could never have envisaged at the outset.

Meanwhile, found in a river in the States… 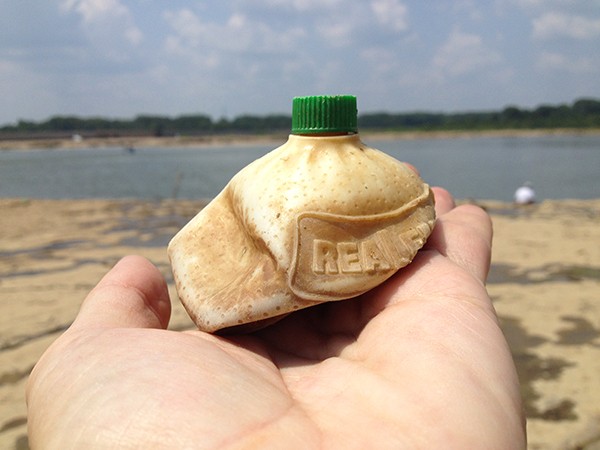 Washed ashore upon the fossil rocks was this smashed plastic lemon.  It once contained “real” lemon juice.  Over the years, I have found many of these lemon-shaped bottles.  What I find interesting here is the presented combination of image and substance…a plastic lemon that once held genuine lemon juice. 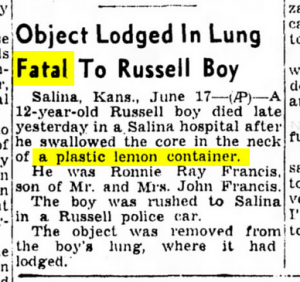 There’s also this Indiana newspaper item about a fatality in 1959 in which a 12 year old boy choked to death after swallowing part of a plastic lemon container.

The lemon-shaped container, thought to be an explosive, was reported to police…

The X-ray suggested there were no electronics and no visible explosives inside the plastic lemon, which was eventually destroyed with a “disrupter…” The disrupter is a square-shaped device used to deactivate explosives. It uses type of shotgun shell and the force of water to break through packages and sever the circuit inside, Officer Nelm said.

Although Wednesday’s scare, apparently was a hoax and there was no bomb, “We can never be sure,” he said. 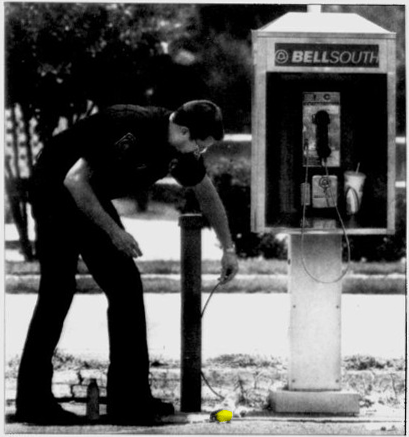 Getting back to Edward Hack, his “HAX” brand logo (with the left-pointing triangle and the ascending typography) goes back at least as far as 1935 where it can be seen in ads for HAX brand aspirin and iodine pencils.

As antique as the HAX logo is, imagine my surprised to learn that, up until last year, it was still in use on a HAX, Ltd. website at www.haxltd.co.uk … 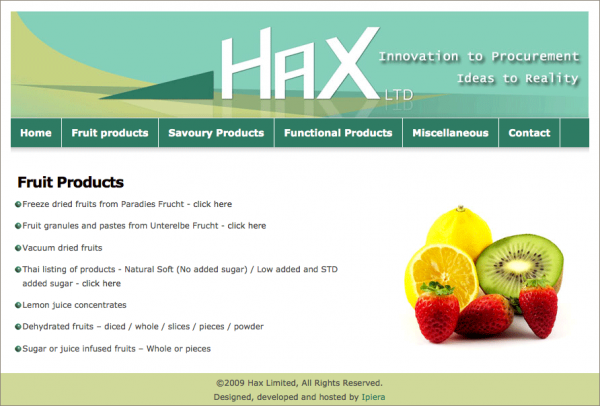 But HAX was not the only brand that Edward Hack ever created.

Tomorrow we look at “FLIP, Ltd.” and some other fruit-shaped, plastic bottles…