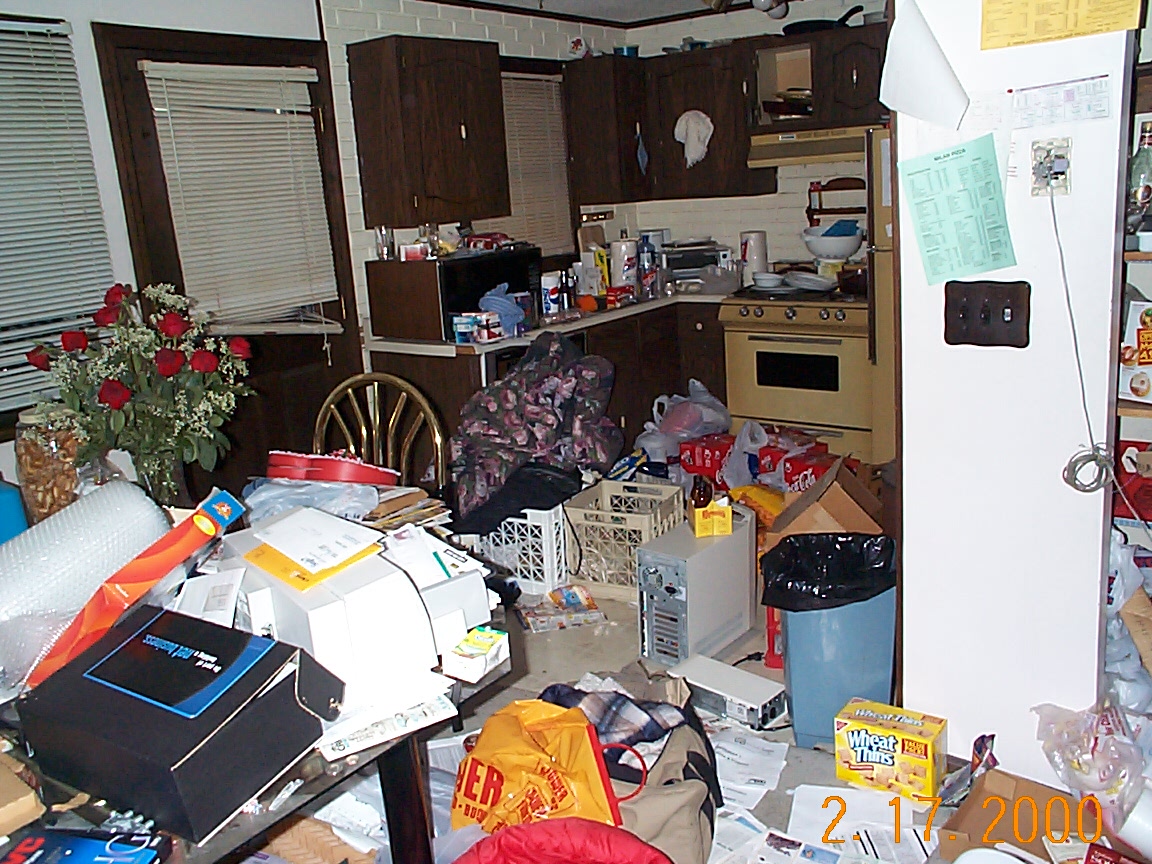 While searching online for photos of Timberland packaging (to illustrate my interview with Buying In author, Rob Walker) I found this photo on the NYC EMS blog. Ostensibly a 2007 photo* of a “filthy” Brooklyn apartment in which police, looking for “an alleged gang member and convicted felon,” instead found an infant in a Timberland shoe box.

Cops removed a 4-day-old baby from a filthy Brooklyn apartment after
finding the girl tucked into a Timberland shoe box, police said.

This sort of story has a way of telegraphing what we are supposed to think about the people who would live in such a place. If your home is described as “filthy” or “squalid” by the news media, the public will tend to judge you according.

If no crime has been committed (and no child’s welfare has been endangered) then your tendency to live like the Collyer brothers is considered your own [psychological] problem. If you are a “hoarder” of this type, the media still regards you with horrid fascination, but Oprah will at least come and help you clean up. (For example: here.)

If something illegal is going on, however, then your messy surroundings will serve as confirmation of some deeper moral turpitude. Since 30% of our trash is discarded product PACKAGING, squalid scenes of moral turpitude (like the photo above) will invariably include some packaging. While some companies might happily pay for certain types of product placement on the nightly news, this story of a baby found in one of their shoe boxes is probably not the sort of product placement that Timberland would seek out. Although the Timberland shoe box in question does not appear to be in the kitchen, there are plenty of other recognizable packages to be spotted in the photo above: Pepsi, Oreo, JVC, Tower Records, Nabisco Wheat Thins, Coca Cola, and Loony Tunes. If it were a fictional context, then these companies might have some recourse to keep their brands out of the story line. (See: product displacement) Controlling their brand images in real life is more difficult. If you sell a lot of products, then some of your product packaging is bound to wind up on the floors of “filthy” apartments.

Personally, I am no neatnik. So it’s worrisome to me what might be written, if I ever gave the authorities cause to search my home/office. I have lots of empty packages all around. (…and a growing collection of empty blood glucose test-strip canisters.) How would I be portrayed by the media? Would my packaging hodge-podge be taken as a lovable, Oscar Madison sort of thing? Or would it seem like something more sinister?

Here on Staten Island, near Silver Lake Park where I jog most mornings, a woman was recently murdered and her apartment burned. (by her underage boyfriend, as it turns out) How did the Staten Island Advance describe her apartment?

“Ms. Adams, a diabetic, had medication bottles strewn throughout her modestly-furnished apartment…”

*Possibly,
the camera’s date was not set correctly when this Brooklyn apartment
was photographed in 2007—(explaining the 2.17.2000 “date
code” in the corner).

« German Chocolate Grenade
So Much Packaging… So Little Time »