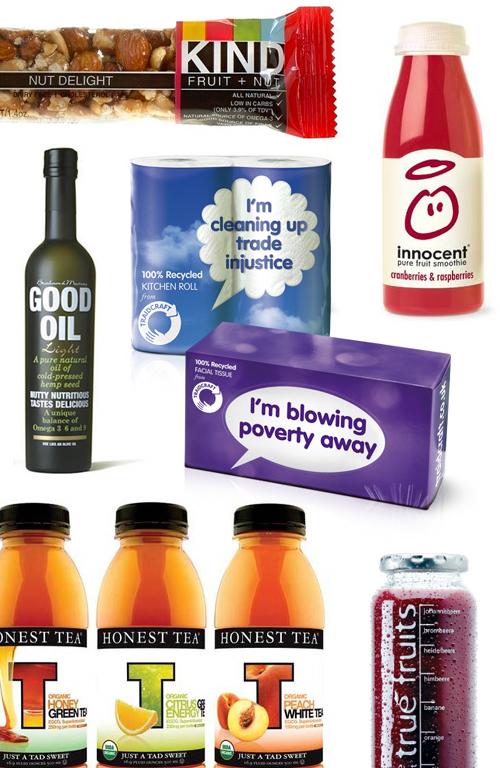 Can package design ever really be good?—not “good” in the sense of being a good design, but “good” in the sense of being virtuous—like a “good person.” Critical comments on The Dieline & other blogs, magazine articles and books… all seem to take package designers to task for their participation in the marketing of objectionable products. The idea that what we do for “work” should also be work for the “greater good” seems to be gaining more currency.

So many products that have been featured on The Dieline actively tout their own virtues (goodness, truth, honesty, kindness, innocence, etc.) and even when the brand name does not name a virtue, good deeds and charity are among the product claims. (sustainable packaging, profits contributed to charities, etc.) Is all this a manifestation of the “new sincerity”?

Last summer on David Airey’s blog, he posed the question: How ethical are your design practices? Not whether you treated your clients ethically—but whether you were morally comfortable with your client list. The 33 comments he received demonstrated that—although there is not a lot of consensus about what it means to be a good person—the idea that graphic designers can (and should) make moral judgments about the jobs they are offered (or given), is very prevalent now.

In the 1960’s, media-savvy young people became skeptical of advertising and packaging claims. They laughed at marketing and prided themselves on “not buying it.” (See my post on Wacky Packages).

This new sincere trend (if it is a trend) seems to suggest that, today, we are more willing to accept product claims, especially when they reassure us that some greater good will come of each small purchase we make. Would it perhaps be healthier to retain some skepticism? Do we wholly accept at face value, Google’s “Don’t be evil” corporate motto? They took some flack for letting China censor their search results. Did they start out sincere and loose their way? Or was the lesser of two evils a good thing, in this case?

In a 2002 piece for Metropolis Magazine, Milton Glaser wrote,

In regard to professional ethics, acknowledging what it is we do is a beginning. It is clear that in the profession of graphic design the question of misrepresenting the truth arises almost immediately. So much of what we do can be seen as a distortion of the truth.

He then goes on to present his “12 Steps on the Graphic Designer’s Road to Hell” starting with “1. Designing a package to look bigger on the
shelf.” and ending with “12. Designing an ad for a product whose frequent use could result in the user’s death.”

…even if large corporations are sometimes suspect, why should he or any designer refuse to work for Enron or any similar establishment? A designer cannot afford to hire investigators to compile dossiers about whether a business is savory or not. Yet certain benchmarks must apply, such as knowing what, in fact, a company does and how it does it. And if a designer has any doubts, plenty of public records exist that provide for informed decisions. However, each designer must address this aspect of good citizenship as he or she sees fit.

(be a good person and continue reading after the jump…)

Until recently, rejecting clients on ethical grounds has been a possibility only for the successful few. To the extent that… clients are seeking
out more ‘ethical’ suppliers I have no objection to designers adapting accordingly. But we should remember that the fundamental contribution designers can make to improving the world is the one they have always made: creating practical and wonderful things that enhance people’s lives.

And in a 2005 article published in Creative Review Macdonald writes:

…today’s graphic activism is characterised by ill-informed, sanctimonious, grand-standing – verging on righteous anger. It is less about understanding the world and engaging in real debate, more about having one’s views endorsed by like-minded colleagues. Less about effecting change, more about showing one’s moral virtue through action or abstinence. Less about showing leadership and being held to account, more about being holier-than-thou.

When a package designer is criticized for having worked on packaging for cigarettes—(or junk food, or liquor, etc.)—I’m reminded of the old moral dilemma about whether it’s right or wrong to steal a loaf of bread to feed ones starving family. And I want to ask, “Is it wrong to design a cigarette pack to get money to buy bread to feed your starving family?”

If you’re lucky enough to be able to boycott a job—(with no dire consequences to hungry/starving children) —then maybe you can also afford to consider: what is the purpose of the boycott? If it’s an organized, en masse action—say, for example, the designers of the world are united in their refusal to design packages for the Evil Widget Corporation—then that could certainly have an impact on said, Evil Widget Corp. If it’s just a personal choice, then perhaps your objective is simply to feel better about yourself. If that is the case and it works for you, that’s still a good thing. Or could you, perhaps, feel better still?

If your conscience dictates that you should turn down any jobs designing cigarette packs, why stop there? Why not also boycott the stores in your neighborhood in which cigarettes are sold?

Sustainable packaging is another area in which package designers seem to bear the brunt of the criticism. On the one hand, I think there are some misconceptions about how much of a say a graphic designer actually has in determining what type of packaging a manufacturer chooses. On the other hand, I think there is a tendency to imagine that all companies are huge, transnational conglomerates with deep enough pockets to do more—if only they weren’t so greedy. This definitely does not jibe with my experience, working with small, start-up companies that are often just one guy with a new product idea. If a company is in the enviable position of being successful enough to retool and make the switch to better, more sustainable forms of packaging—(and thereby reap the positive PR benefits)— then that’s surely a good thing. But if a company is just scraping by, and their competitors are not investing in sustainable packaging, then I can’t see some lone package designer digging in his or her heels and insisting that their client must go green or go bankrupt. To really do good, the sustainable packaging mandate must be fairly applied to all. A Walmart or a federal government (same thing?) are in a much better position (than graphic designers) to insist upon this. And if all manufacturers had to follow the same sustainable packaging rules, than theoretically those rules shouldn’t put any company at a competitive disadvantage.

Even if our own small, personal boycotts do not change the world, they do give us some satisfaction—a feeling that “at least I have the courage of my convictions.” Take me, for instance. I’m not into bottled water. Seemed like a crazy idea to me when it first came out—like selling air. Today it’s a huge (and unsustainable) industry—with a lot of attractive packaging. I am not now nor have I ever been a bottled water customer. I guess you could say, I’m boycotting it. But if they ever wanted me to design a label…