Never mind today’s (partial) release of the J.F.K. Assassination Files. We at box vox have other big news, also dating back to 1963.

I recently purchased this 1963 press photo depicting Senator Philip A. Hart railing against the deceptive illustration on a frozen cherry pie box. I figure it’s historically significant, since it garnered a lot of publicity and eventually led to the passage in 1967 of the Fair Packaging and Labeling Act.

Hundreds of newspapers published this photo. So did Modern Packaging magazine:

How many cherries should there be in a frozen cherry pie?

Sen. Hart, who did the counting, said that the pie in question contains only 40 cherries (in the plate at left), but that the carton illustration shows 34 in one wedge alone. The Senator also counted the cherries in the same-size pie served in the Senate cafeteria and found that they numbered 108. It should be noted in passing that Michigan produces some 60% of the nation’s annual cherry crop.

Looking closer at the photo, however, there was something about it that puzzled me. The brand name appears to have been deliberately obscured, even though other brand names were freely cited during Congressional testimony and in the press.

For Senator Philip Hart, the gentlemanly Democrat from Michigan, it started at the breakfast table. The Harts and their eight children all like to eat Nabisco Shredded Wheat in the morning. But in 1961 they discovered that the old, familiar box had changed ; it had become taller, and narrower. Inside, there was still twelve biscuits, each apparently the same size as before. But a close reading of the new label indicated that here, too, something curious had happened. The net weight of the contents had been reduced from twelve ounces to ten and one-quarter. The Harts concluded that they were paying the same price for less cereal and more package.

Jeremy Main, Industry Still Has Something to Learn about Congress
Fortune Magazine, February 1967

If the Senator was willing to publicly call out Nabisco for its package downsizing, why then was it necessary to redact this frozen cherry pie brand? Who was he protecting? We may never know, but I thought that I just might be able to figure out which brand of frozen cherry pie it was that the Senator chose to conceal.

For me, this sort of package design research should have been low hanging fruit. But it turns out that there were an awful lot of different frozen fruit pie brands in those days. The boxes shown above are just a small sampling of brands that I found which did not match the Senator’s frozen cherry pie box.

After almost 2 months of effort, however, I finally found it last night.

Is it newsworthy? I don’t know, but you can read all about it, after the fold.. 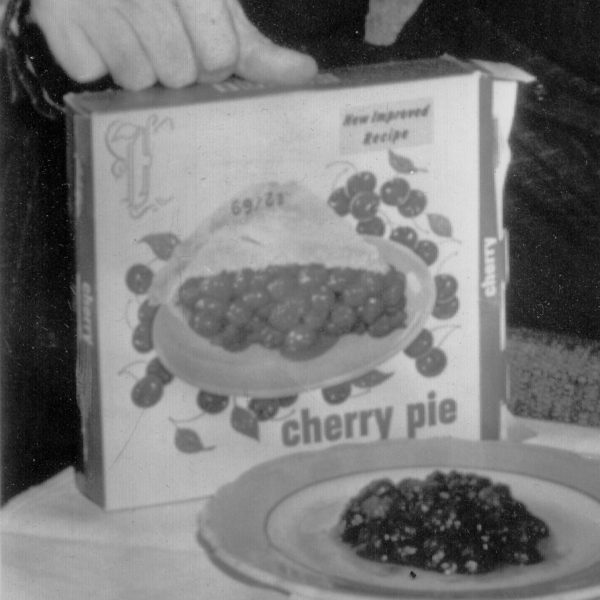 If you look closely at the whited out area on the box in the press photo, you can see what appears to be part of an old-English style letter. I thought it might be an “E” or an “F.” If it was part of a logo, then it shouldn’t be too hard to find, I figured (wrong).

I’d read somewhere that it was a supermarket brand, rather than one of the major national brands — like Morton or Swanson or Pet-Ritz. Knowing that Hart lived in Michigan, I tried concentrating on supermarkets that were in Michigan during the 1960s. No luck.

Many years ago my dad worked for a packaging company and they made boxes for some kind of frozen cherry pie. Some lady complained to the BBB or some other agency that the piece of pie in the photo on the box had about twice as many cherries visible as a real piece, and so the company trashed all the remaining boxes and had new ones made up with a different photo. This was way back in the late 60s.

Reading that, I felt certain that I’d found an important clue. Even without the brand logo, the rest of the box with the slice of cherry pie and the loose cherries in the background would be recognizable enough. Whatever brand it was, I figured they must have realized that their package was now an albatross.

I tracked down the commenter and learned that his father was the late Dan Leary who had a long career at Crown Zellerbach. (Leary invented and patented a “tear string pouch” for the company’s “Western-Waxide” Division.)

It’s possible, of course, that the remaining frozen cherry pie boxes that were trashed in the late 60s at Crown Zellerbach were a different brand. The press coverage that accompanied Hart’s frozen cherry pie photo tells us that he also “asked the FDA to set some standard on how many cherries a pie should contain.” And eventually the FDA did exactly that. Oddly, they never established standards for the other frozen fruit pies. Only for cherry.

Note: In 2005 the American Bakers Association submitted a petition the FDA seeking (among other things) to revoke the frozen cherry pie standards.

So it’s possible that it was a different brand of F.C.P. (frozen cherry pie) that was bearing the brunt of these newly stringent regulations.


I had high hope for the Crown Zellerbach clue. In 1955 they had developed a stock package design for manufacturers of frozen fruits pies.


Stock vignettes for “family size” frozen fruit pies are the newest service to be offered by Western Waxed Paper Division, Crown Zellerbach Corporation. The colorful designs, each featuring a luscious slice of pie, were developed, according to Western, to meet an increasing demand for stock, large-size frozen fruit pie overwraps. Topco Associates, Inc., Chicago, has already adapted the designs and will introduce the vignettes on its Food Club and Top Frost labels for apple and cherry pies. The stock vignettes were designed and produced at Western Waxed’s North Portland (Ore.) plant and will supplement Western’s five lines of stock designs for frozen vegetables, seafood, fruits, meat and specialty items.

It seemed promising, but I Google-searched in vain for a Crown-Zellerbach-printed frozen fruit pie box that matched our photo. While the company did design and produce packaging for the brands mentioned above, as well as for Frosty Acres’ brand of frozen fruit pies in 1958, none were a match.

Then I realized that the pies must have been purchased at a supermarket in Washington DC, rather than in Michigan. 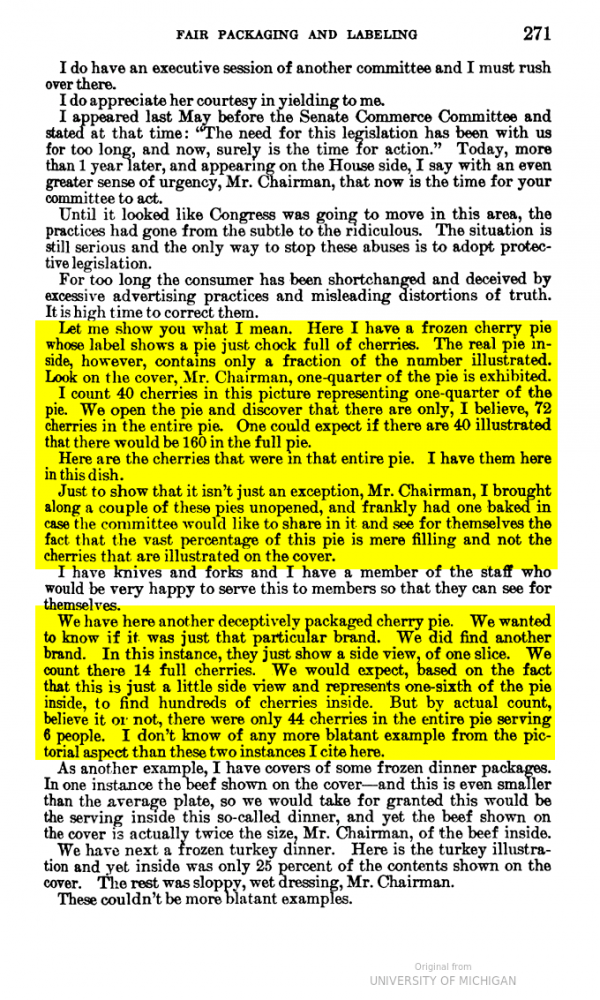 The two major supermarkets in DC (at that time) were Safeway and Giant Food. I tried to figure out which store brands from the store might match our fragment of old-English typography. Safeway used its “Bel-Air” brand for their private label  frozen fruit pies. That didn’t match at all.

Then last night, when I had little hope of ever finding it, I came upon this newspaper ad for Giant Food, published by Maryland’s Daily Times in 1963. 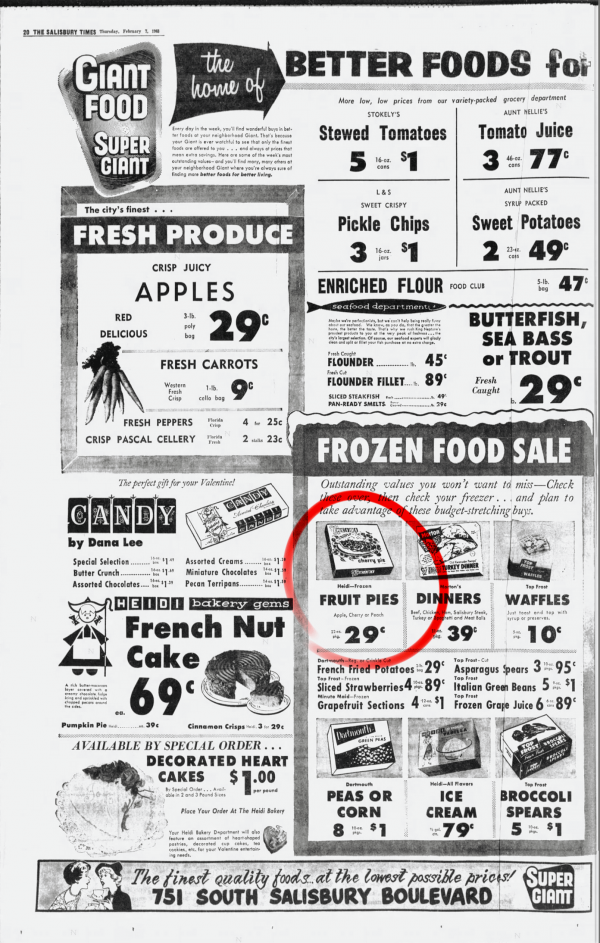 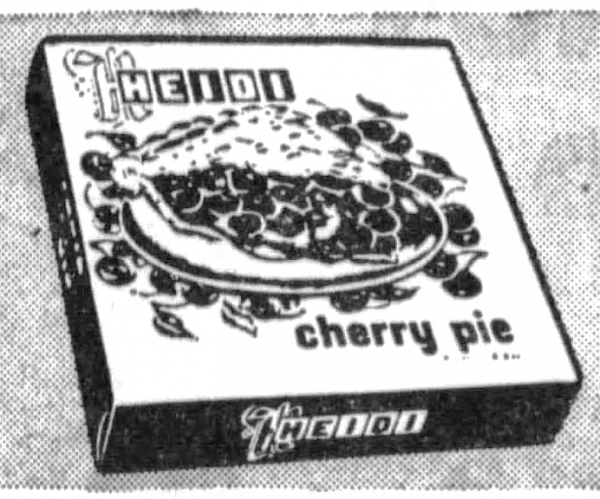 I know I’ve seen the Heidi brand logo before, but I don’t think I’ve ever seen it combined with an old-English “H.” until now. Why hide Heidi?

ell if I know.