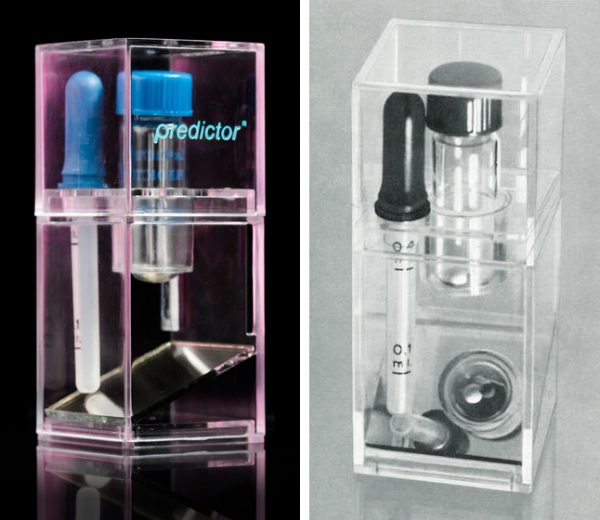 On left: detail of Tony Cenicola‘s photograph for the NY Times; on right: detail from a 1970s Predictor® magazine ad

Crane didn’t just design the look of the container, however. The whole idea of a home pregnancy test was entirely hers. 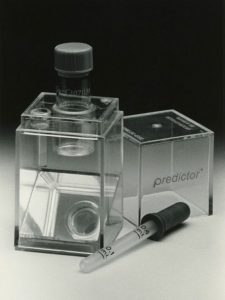 Here’s how her idea came about:

A woman should be able to do that herself

In 1967, I was hired by Organon Pharmaceuticals in West Orange NJ, to work as a freelance graphic designer on a new line of cosmetics.

On a visit to the laboratory with the cosmetic work, I noticed multiple lines of test tubes suspended over a mirrored surface. I was told that they were pregnancy tests… Each test tube contained reagents which when combined with a pregnant women’s urine, would display a red ring at the base of the test tube, as reflected in the mirror. I thought how simple that was. A woman should be able to do that herself.

At home in New York, I made a few unsuccessful attempts to design a device. Then one day, I was absentmindedly looking at a little plastic box on my desk. I used it to hold paperclips. It was perfect. It was the right size to hold the components needed for the test. For a mirror, I cut a piece of Mylar to fit at an angle at the base.

Voices of the 20th Century

Crane’s pregnancy test packaging was first in the news in 2015, when her original prototype (made in 1968 from a paperclip box) was included in Bonhams’ auction entitled, Voices of the 20th Century. 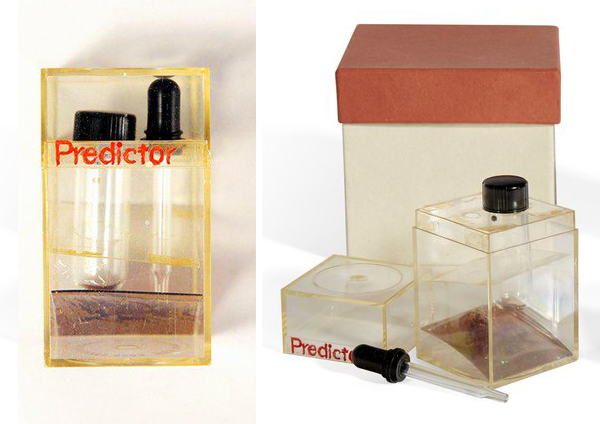 The Smithsonian placed the winning bid. Crane’s prototype and the other items in “Lot 37” are now part of its collection.

One reason Crane’s story is so compelling, is that her male employers treated her rather badly.

The managers and executives at Organon Pharmaceuticals presented so many objections and obstacles —to the product being created, to her receiving any credit for the idea and ultimately to her benefiting from it financially — that it’s hard not to view the company’s behavior as exploitation.

Pagan Kennedy touched on each of these obstacles in her recent New York Times article:

Ms. Crane brought her model to work and begged her managers to consider her idea.

They all said no. The company’s market was doctors, and doctors would hate this product that made their services seem less necessary. On top of that, her managers seemed terrified by scenarios in which hysterical women killed themselves. “What if a senator’s daughter, unmarried, found she was pregnant and jumped off a bridge?” one asked. “The company would have to go under for that.”

… After Ms. Crane’s bosses said no to the pregnancy test, she retreated to the office that she shared with a secretary. There, she busied herself with her usual work, sketching lipstick cases and cosmetics bottles.

[credit for the idea]

But it turned out that one of the executives suggested her concept to his bosses at Organon’s parent company in the Netherlands — and the Dutch greenlighted the project. No one bothered to inform Ms. Crane.

In January 1968, Ms. Crane heard a rumor that her bosses were going forward with the home pregnancy test. She learned there was going to be a strategy meeting where men would discuss the design of the new product, and decided to crash it.

She found her boss in a conference room with a group of freelance product designers. On the table, the designers had lined up their proposed models. In an effort to appeal to female customers, the male designers had covered them in flowers and frills…

She slid her prototype into line with the others. Its clear plastic walls showed off the minimalistic lab equipment inside. Then, with a glance at her boss, she took her seat at the table, challenging him to throw her out. He didn’t.

As the meeting came to order, a lanky adman appeared in the doorway and shook hands all around. This was Ira Sturtevant, who had been hired to oversee the marketing plan… He inspected the line of prototypes, and then pounced.

“This is what we’re using, isn’t it?” he asked, holding up Ms. Crane’s model.

No, her boss said. “That’s just something Meg did for talking purposes.” He claimed it would be too expensive to manufacture.

Ms. Crane was sure of two things: She would prove that her model could be affordably manufactured and distributed to women. And she would spend the rest of her life with Ira Sturtevant.

In the end, her model won out, because it was the only one that would reliably allow customers to perform the lab work and view results. In 1969, Organon applied for a patent, with Ms. Crane listed as the inventor. “We had a little ceremony in the office, with the lawyers and executives. They had me sign my rights away for $1,” Ms. Crane told me. She never did get that dollar.

There were, in fact two patents. The functional patent… 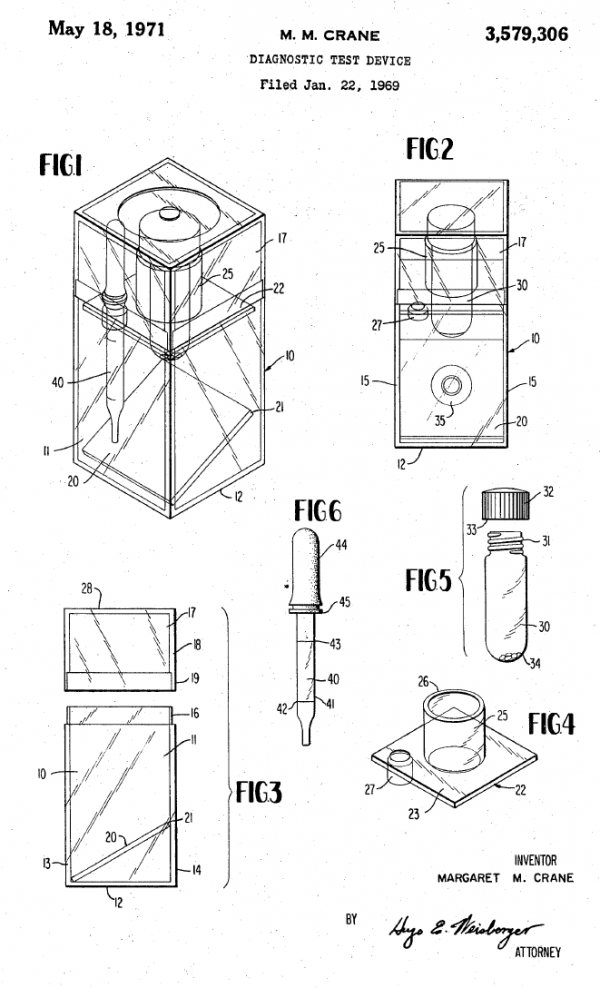 … and the design patent: 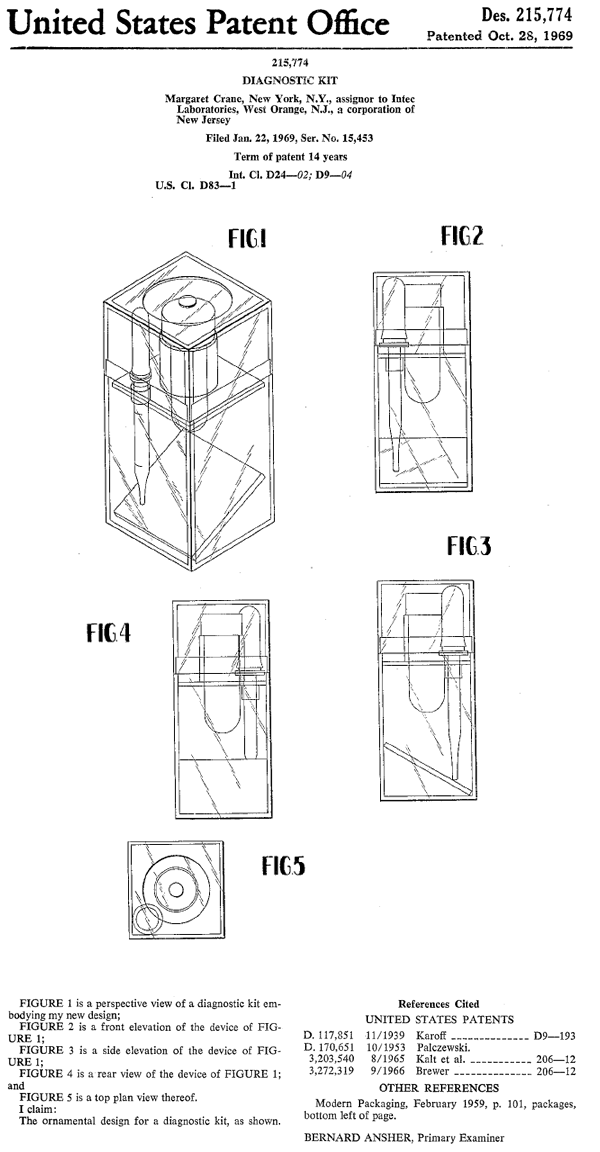 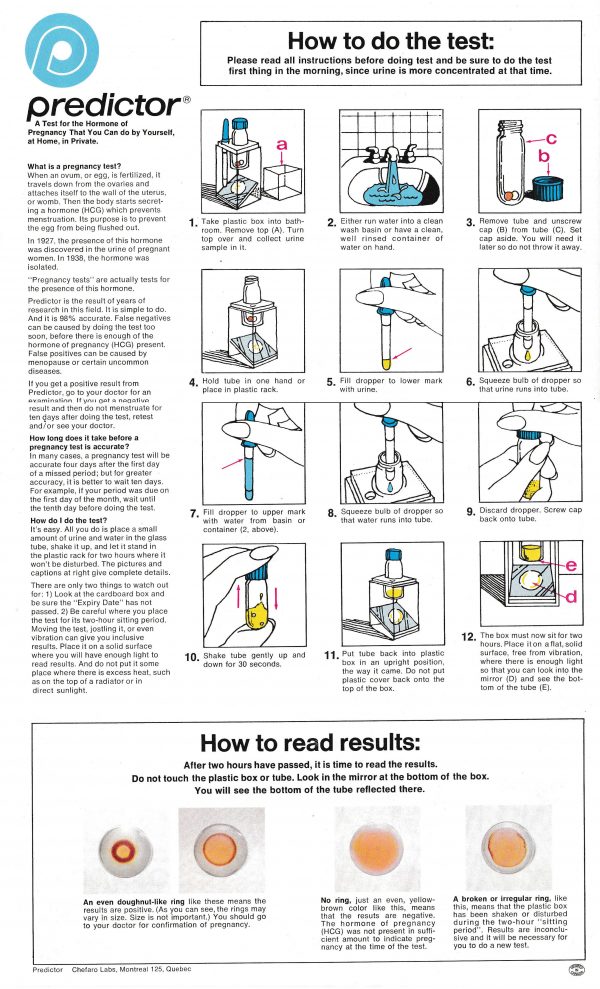 An instructions insert from the Predictor® home pregnancy test (via: PXR)

I’m wondering if Crane also named the product, since the name “Predictor” appears hand-lettered on her 1968 prototype. (Update: I spoke with Meg Crane over the phone a couple of days ago, and she confirmed that the brand name “Predictor” was also her idea.)

The company filed for trademark protection of the name in 1968, even before filing the 2 patent applications. 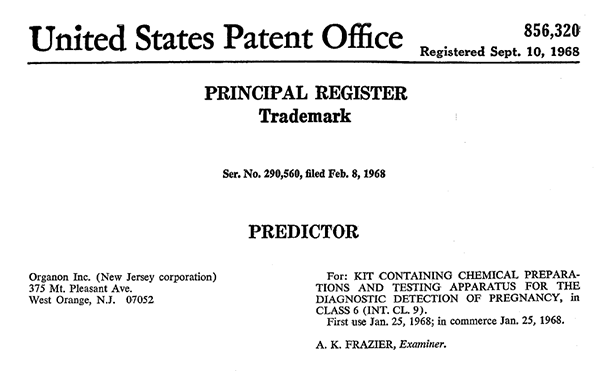 Ira Sturtevant, the ad man who recognized the superiority of Meg Crane’s package design, did, in fact, become Meg Crane’s partner — both romantically and professionally. On the one hand they began cohabitating. On the other hand, they formed an advertising/design firm called, Ponzi & Weill* and, in that way, played a vital role in the product’s promotion.

CHEFARO LABS, Montreal, a subsidiary of the Dutch pharmaceutical company AKZO-PHARMA, is launching a Canada-only ad campaign for a do-it-yourself pregnancy-testing kit. The promotion is being handled by New York agency Ponzi and Weill.

Bernard Konopko, general manager for Chefaro, said the decision was taken to co-ordinate the Canadian campaign for the kit — called Predictor — out of New York because Ponzi had already completed more than three years of research into the product.

He said: “We originally anticipated we would be ready to market Predictor in the U.S. three years ago. But approval did not come through from the U.S. Public Health Service. The Canadian Federal Food and Drug Administration gave its approval more readily — so we switched to the Canadian market.

Pregnancy-testing kits are only really controversial on first exposure. We’ve had absolutely no problems with churches of any denomination, for instance. Most welcome the kits. “After all, it’s important for a woman to know at the earliest opportunity if she’s pregnant or not… He added: “We have not included TV in our first media choice. We don’t yet know whether our sales might be restricted by city size. It would be foolish to invest in TV production costs before we know our market.”

Although TV may not have figured into Predictor’s early advertising plans, one of Meg Crane’s pregnancy tests did play a role in The Dead of Jericho, the first installment of the British Inspector Morse series. (Check out the first 30 seconds of the video below.)

What happened to Margaret Crane? If her life were a typical romantic comedy, she would have married Ira Sturtevant and used her own invention to find out that she was going to have his baby. But she invented her own kind of Hollywood ending. She and Mr. Sturtevant lived happily for 41 years in a series of enviable Manhattan apartments — without ever marrying or having children — until his death in 2008. “I was so lucky,” Ms. Crane said, summing it up.

(For another package invented by an employee see: Erik Wallenberg.)

*I wasn’t sure, at first, what to make of the name, Ponzi & Weill. I’ve known some design firms that were named after silent partners. I idly wondered whether they had suffered any branding problems due to their name too being reminiscent of a “Ponzi scheme.”

It turns out, however, that the firm’s name was a deliberately wry joke. Ponzi is, indeed, Charles Ponzi, inventor of the Ponzi Scheme. Weill, is Joseph “Yellow Kid” Weil, a famous Chicago con man. (Interestingly, Weil/Weill was still alive when Crane and Sturtevant founded their namesake firm.)

Next time we’ll feature another product designed by Meg Crane.