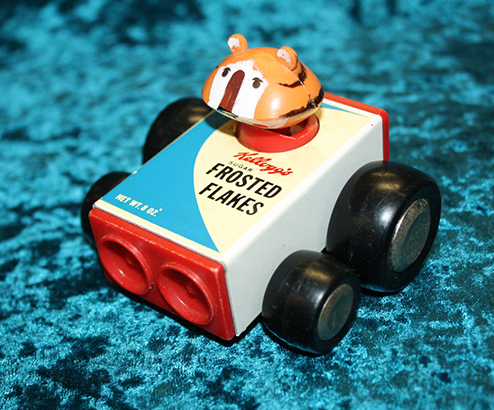 It was the little picture on the right that first drew my attention to what I eventually learned were called “Pop Art Buggies.” A series of toy cars, launched by Buddy L in 1971, that were designed to resemble product packaging.

For kids, seeing familiar food packages transformed into dune-buggy/go-cart toy cars probably made perfect sense, coming, as it did, a few years after the launch of Topp’s wildly popular “Wacky Packages” stickers.

Probably the first time that the trademark name of a $1 kids toy car was ever based on a contemporary art movement. (Barring any “Op Art” brand of toy cars that I’ve yet to discover.) 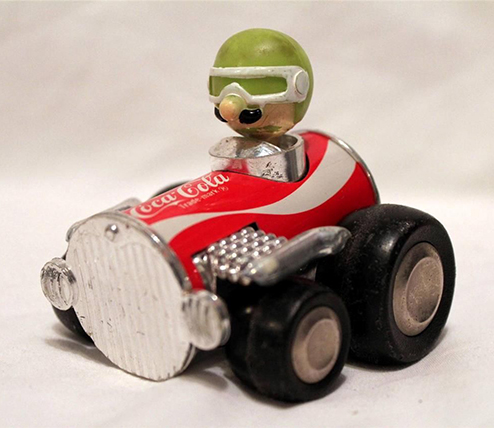 How many different models of “Pop Art Buggies” were made? Well I don’t have any Buddy L product catalogs to refer to, but my research on eBay and in old newspapers seems to show that there were only six models ever made.

The full set of Pop Art Buggies (via: Worthpoint)

The GE light-bulb shaped “Lightn’n Bug” is the outlier of the group—a product, not a package.

While the “real” products here are the toy cars, the real question is: how were these package-shaped toy cars packaged? 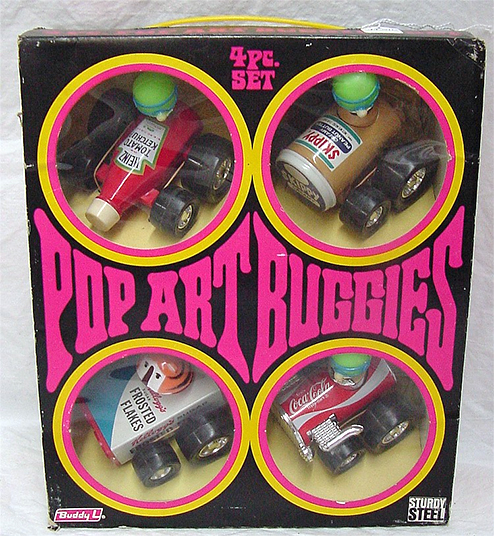 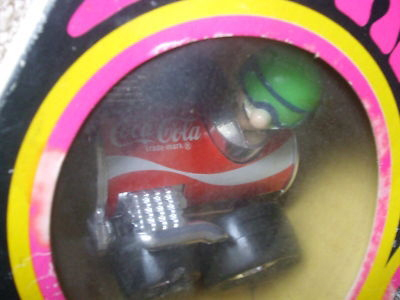 1. Four of the six Pop-Art Buggies were sold as a 4 pc. set in a folding carton with psychedelic typography and four, round “porthole” style windows. (See also: The Nibb-its “See Thru” Bag)

The 4 piece sets appear to have included various assortment of the six Pop Art Buggies, making it difficult, I would imagine for someone to collect all six without purchasing some duplicate buggies.

Some Pop Art Buggies, however, do appear to have been sold separately. (See: #3) 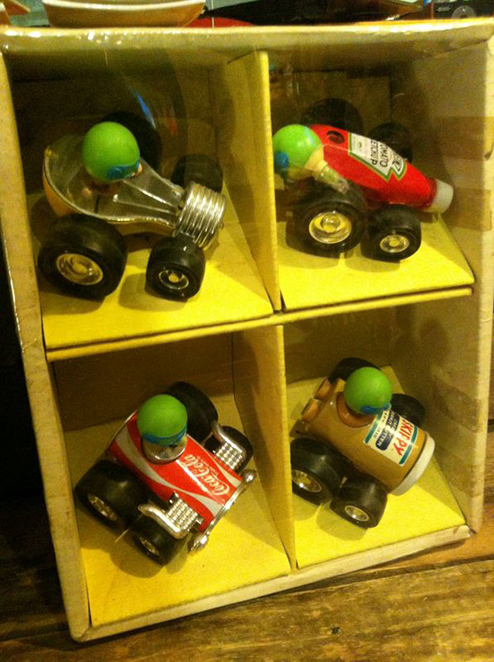 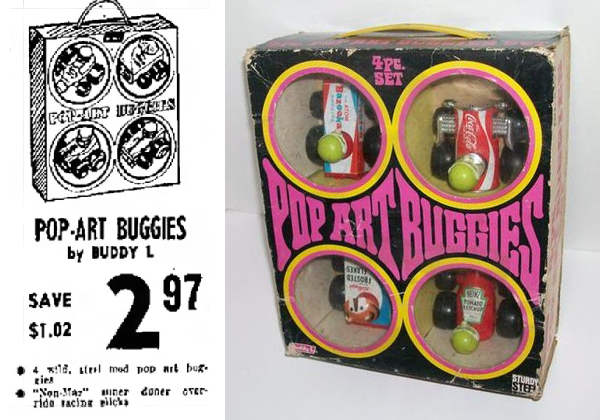 2. There was also corrugated version of the 4 piece set box with printed circles and illustrations of each buggy instead of the porthole windows. 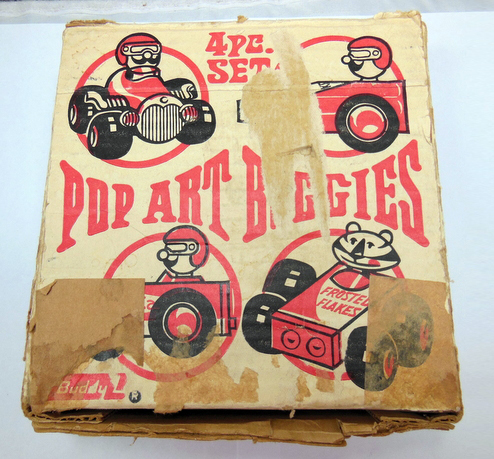 Another vintage 4 pc. Pop Art Buggies set in the corrugated box (sold on eBay for $41) 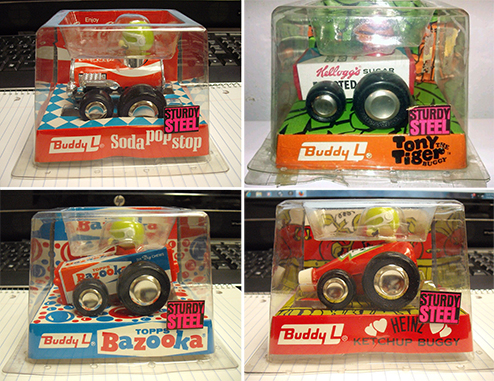 3.  For those Pop Art Buggies which were sold separately, Buddy L used its patented “Toy Package” (below) to contain its container-shaped cars. 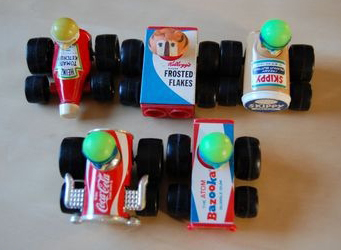 If I were a toy collector, it would be these 5 Pop Art Buggies that I would want — the package-shaped cars that are clearly in my wheelhouse.

(Not so much: the light-bulb shaped buggy.)

Below are some other newspaper ads, some additional photos from eBay, and Buddy L’s 1971 trademark document for “Pop Art Buggies.” 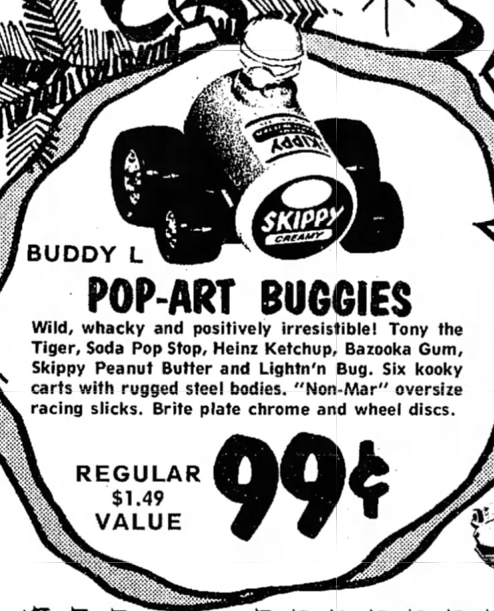 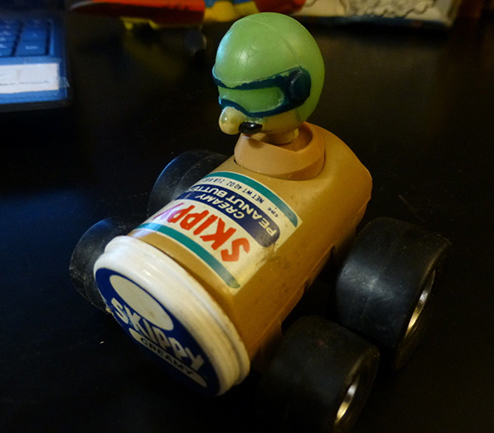 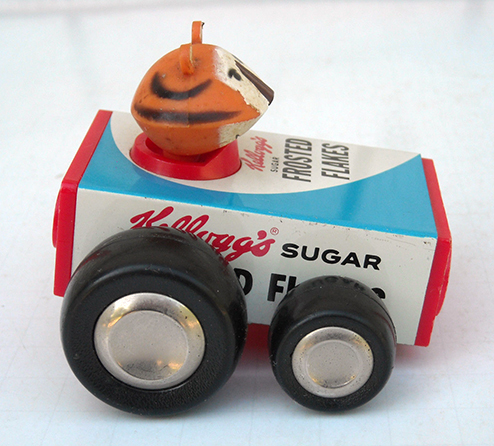