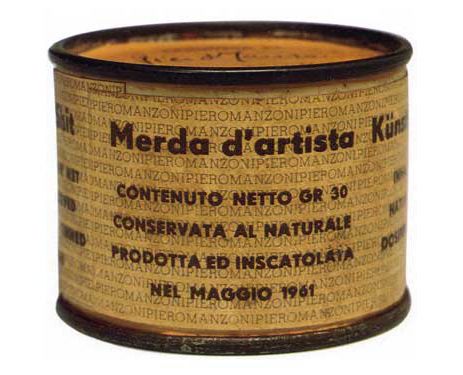 I just finished reading Garbage Land, Elizabeth Royte’s excellent and comprehensive 2005 book about what happens to our waste after we send it off… kitchen garbage, recycling and, yes, even sewage. Her quest to follow her family’s waste streams to see where they all wind up, was fascinating to read—(even if some of that fascination was of the horrid variety)

The parallels that she draws between the circuitous paths both of recycled packaging waste and of processed human waste—(see biosolids)—reminded me of this artwork (above) by Italian artist, Piero Manzoni. As a package that actually contains human waste, I thought that this 1961 artwork kinda brings both those ideas together.

Part of the Arte Povera movement, Manzoni made an edition of 90 cans, with multilingual labels of Italian, English, French and German. Although typographically nothing special, the all-over “PIEROMANZONI” repeating background pattern predates the designer-logo-pattern-product thing by a couple of decades. (see: my last week’s post on Branding in your home)

Sold for the a price equivalent (at that time) of their weight in gold, editions of this artwork are included in collections of the Tate Modern in London and the Museum of Modern Art in NY.

There’s a hilarious audio tour on the Tate Collection’s site that features, what I took to be, two art conservators examining and discussing the artwork. After delving deeper, I now realize they were not conservators, but are, in fact, Dr. Mark Miodownik and Martin Conreen of the Materials Library of King’s College.

(more photos after the jump…)

Left: A retail package of Milorganite pelletized municipal waste (fertilizer) from Milwaukee; right: photo by Rick Wood from The Milwaukee Journal Sentential Online
shows large bags of Milorganite, stored at the bagging operation on
Jones Island (for use on golf courses and other commercial sites.) 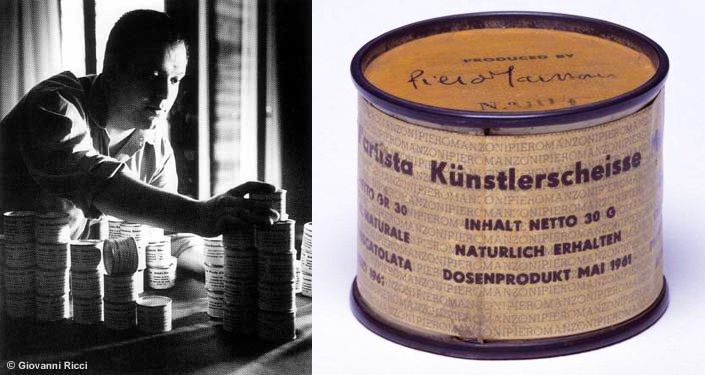 Left: the artist as “stock boy”—Piero Manzoni stacking cans of his artistic output; right: the German portion of the multi-lingual label from the Tate Collection’s can