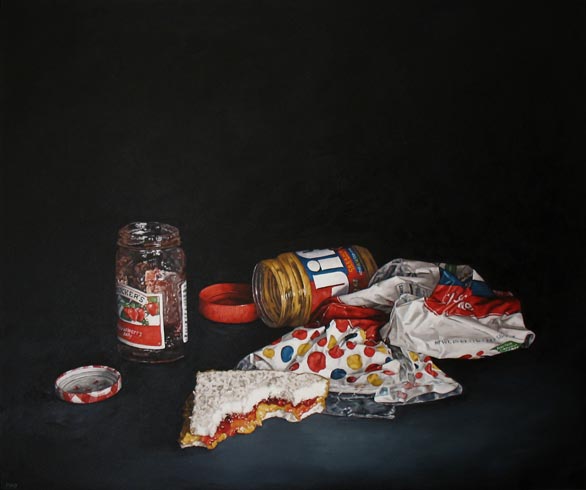 It’s been Wonder Bread week here on boxvox. (In case you were wondering…) Since last Friday.

To close out the thread and (hopefully) lead us on to other topics, I’m starting off with the painting above from the “Series II” still-life paintings of Pamela Michelle Johnson. (via: the MKTG Tumbler site) Note: the rumpled Wonder bread bag…

Two things strike me about this body of work:

Thing 1: They suggest the traditional conflicts of abundance & decay found in vanitas still-lifes …

Vanitas paintings gather up objects that indicate abundance and decay, luxury and waste, to remind you that nothing lasts forever, particularly yourself. Some exude austerity, thumping the death note pretty hard; others luxuriate in a pile-up of earthly bric-a-brac. The word itself, vanitas, means “emptiness” in Latin, and at their most moralistic, the paintings try to spark an awareness of the deficiencies of the material world, urging you to lead a good temperate life and better prepare yourself for what comes after.

The conceit gains its force through a combination of extremes (items simultaneously flourishing and decomposing), the expression of appetite (through food and place setting)… and the suggestion of human presence (the meal that looks as if it were suddenly abandoned). 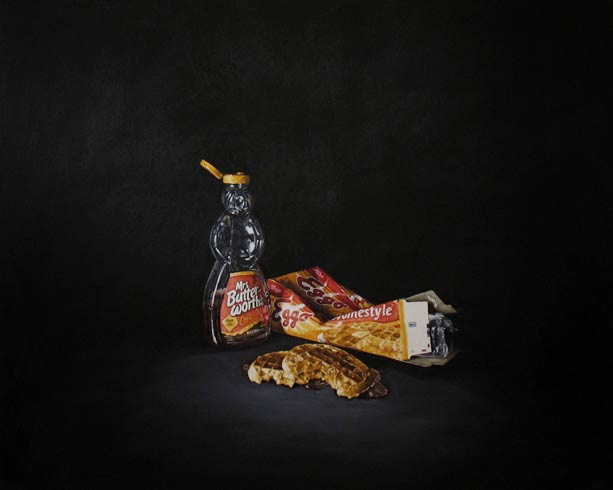 Thing 2: By showing these packaged foods towards the very end of their useful life, Johnson highlights the “negative moment” that Thomas Hine talks about in his book, The Total Package:

“… once the product has been used up, and the package is empty, it becomes suddenly visible once more. This time, though, it is trash that must be discarded or recycled. This instant of disposal is the time when people are most aware of packages. It is a negative moment, like the end of a love affair, and what’s left seems to be a horrid waste.”

Zeroing in on specific consumer brands in relative isolation—(rather than showing cornucopias of variety and abundance)—Johnson portrays packaging and contents in use. The packaging in particular appears to have been thoroughly used. Bottles & jars are mostly empty. Boxes are already halfway crushed—(well in advance of the trash compactor).

Certainly not advertising imagery, but still appetising in sad sort of way. Where early vanitas painting reminded 16th and 17th century viewers of their own inevitable death, these paintings present the brief, but profitable lifespan of fast moving consumer goods. And as consumers who strongly identify with what they consume, this works on us in pretty much the same way—reminding each us of our own expiration date.

(More paintings by Pamela Michelle Johnson, after the fold…) 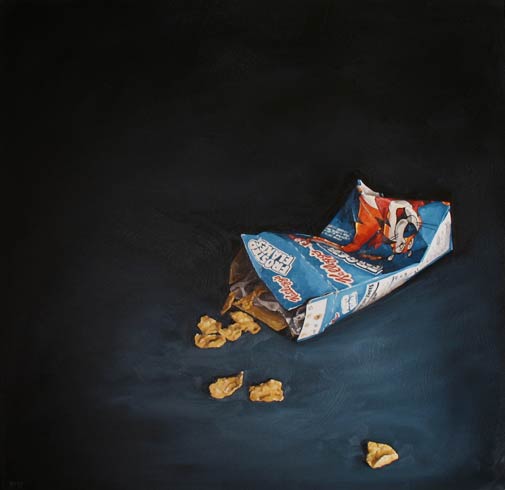 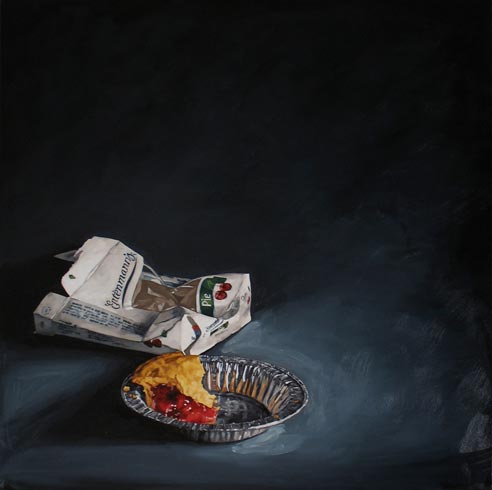