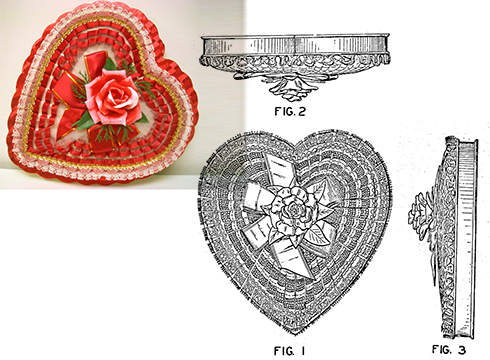 Heart-shaped candy boxes. Some sources say they were “invented” by Richard Cadbury, but if he did invent them, he does not appear to have ever patented the idea.

Others, however, designed, applied for (and were granted) patent protection for lots and lots of heart-shaped candy packages.

One of these was Joseph Ehrenfeld. Since the early 1900s, heart-shaped boxes were a specialty of the A. Klein & Co. that Ehrenfeld took over from his uncle, Adolph Klein. (See: Unfolding the Story of the Heart-Shaped Box)

Joseph’s design patent illustrations for heart-shaped boxes with pleated ribbons and lace are shown above and in the upper left corner of the image below. Not that his was the only solution to the problem of how to best construct a heart-shaped box.

Usually these are rigid set up boxes, rather than folding cartons, but as with most affairs of the heart, there are exceptions.

(2 vintage ideas for heart-shaped box recycling, after the fold…) 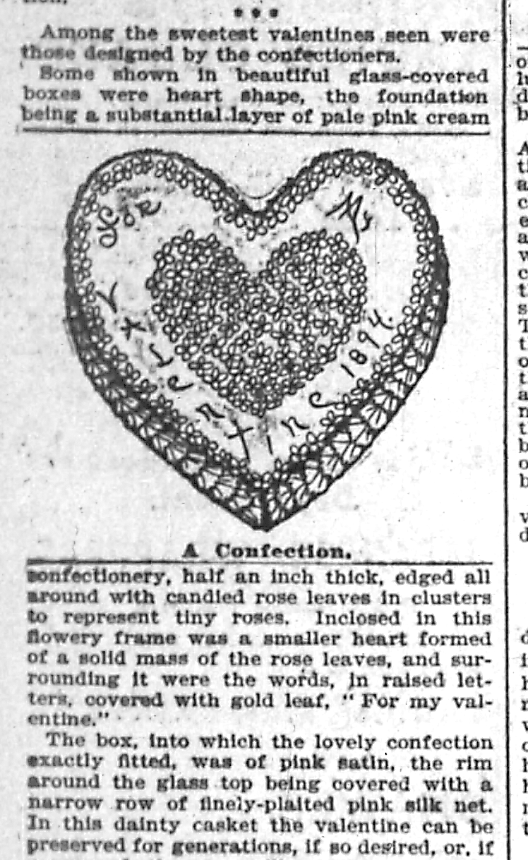 “The box, into which the lovely confection exactly fitted, was of pink satin, the rim around the glass top being covered with a narrow row of finely-plaited pink silk net. In this dainty casket the valentine can be preserved for generations, if so desired, or, if consumed, the case will serve as a charming receptacle for jewels.”

A couple decades later, of course, she could have used one of Joe Ehrenfeld’s patented boxes with flowers and ribbon already in place.