Two cigarette packs using “Peace” as a brand logo, but neither could ‘exist’ without Raymond Loewy.

My most vivid impressions of American design are the Lucky Strike and Peace cigarette packages designed by Raymond Loewy that accompanied Japan into an era of peace after the devastating defeat of World War II.

When Raymond Loewy redesigned the Lucky Strike cigarette pack in 1939, there was no such thing as a “☮” (the peace symbol). In fact, that symbol didn’t even exist until Gerald Holtom designed it for a “nuclear disarmament” march in the UK in 1958.

Loewy did, however, design the Peace dove symbol, used in his redesign of Japan Tobacco’s Peace brand cigarettes.

What does cigarette smoking have to do with world peace or nuclear disarmament?

We look at each project in more detail, after the fold…

Better known for his 1939 redesign of the Lucky Strike cigarettes pack, but in 1952 Loewy also redesigned a cigarette pack for the Japanese cigarette brand, “Peace.”

A Japanese firm engaged Raymond Loewy Associates to design the Peace cigarette package from an American approach. The first change was the simplification of the design — bands of small gold starlike figures were removed from top and bottom of package. The next change was the establishment of an identifying device — the dove of peace, a universal symbol. Next, the type face was simplified. Last, use of color was determined — a strong blue was maintained as well as gold. Japanese technique gives excellent gold reproduction. Name is clean white for sharp contrast against blue. After adopting the new design, Peace cigarettes sold four times as many as in the previous fiscal year.

In return for his design from an American approach, Japan Tobacco paid Loewy a very high fee. A phenomenal amount for post-war Japan. So high, in fact, that it the profession as a whole gained more prestige.

Loewy’s 1952 redesign of the packaging for Peace was a return to form for the Japanese tobacco market. Pre-war images of happy children and fireworks were eschewed in favor of an iconic, though oddly positioned geometric rendering of a dove in Loewy’s steamlined style. That the bird appears to be plummeting instead of flying upward is an odd stylistic choice, however it was elegantly rendered and the package has remained virtually the same since its inception.

What really caught the public’s attention was Loewy’s design fee for redesigning the ubiquitous brand. Unheralded in any sector of graphic design in Japan, the project fee for Loewy designing the packaging was a crisp ¥1,000,000 — a fortune at that time. The sheer amount had the nation atwitter and instantly skyrocketed public opinion of the work of commercial artists. Graphic designers and illustrators saw an increased perception of value in their work, as well as a noted increase in design fees in the years immediately following the Peace re-branding project. 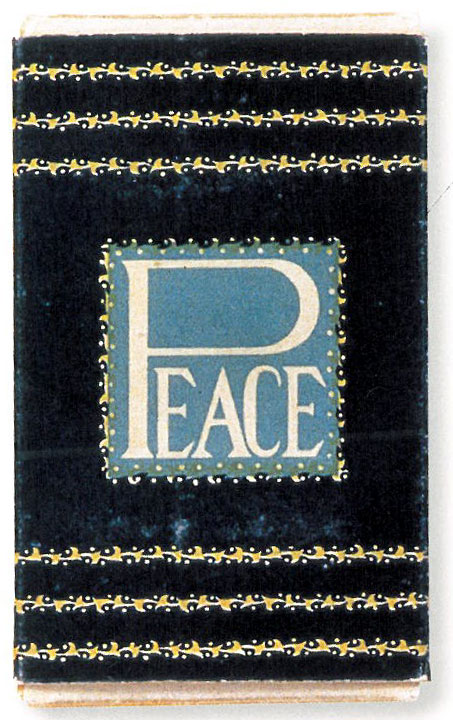 Prior to Loewy’s redesign, Japan Tobacco and Salt (Japan’s nationalized tobacco monopoly) was using the design on the right for their Peace cigarettes brand.

Based on Google-translated Japanese websites, I gather they held a contest or polled the public to choose a new name. But “Peace” only came in second place. What brand name beat out “Peace” in the minds of 1946 Japanese smokers?

I’ve leaned not to rely too much on Google to provide accurate Japanese translations. Still, the first place name brand might have been “New World.”

“Peace” is the first cigarette to recruit name and design from consumers…  The 1st place gathered by the public offering of prize was “New World” (new world), but eventually it became the second place “Peace” to be commercialized.

Why was it not possible to use “New World”? The only answers that I can find are quite vague. I wonder: did Loewy persuade his client that “Peace” was the better the brand name?

I also found the two photos below on Okayama’s 70 Seeds website. Lowey presented these 9 design options in his proposed packaging for the “Peace” cigarette brand. 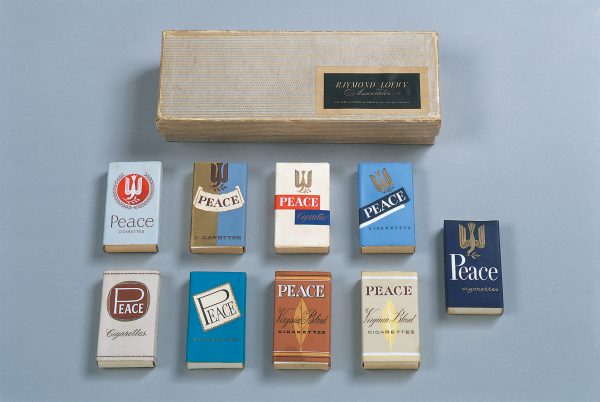 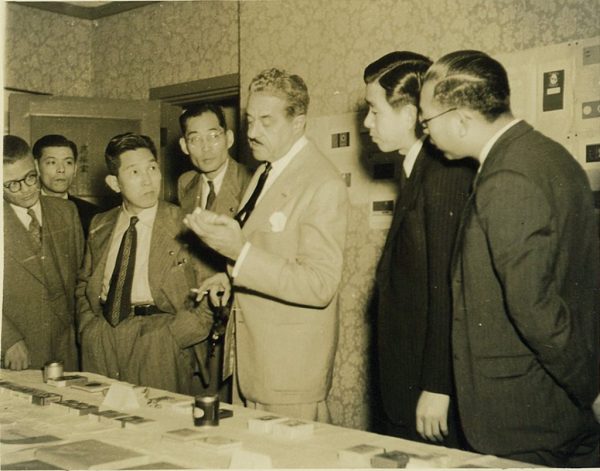 As the streets were filled with poor-quality goods and black market imports in the chaos following the end of World War II, Peace was a brand developed by staking the prestige of Japanese cigarettes. The brand was named as a symbol of the hope that an age of peace would follow the tumultuous postwar years. The ”dove carrying an olive branch” mark was inspired by the story of Noah’s Ark in the Book of Genesis. It symbolizes dreams, hope, and the desire for peace.

Ian Lynam, who we quoted earlier, commented on the dove’s “odd” downward trajectory. He describes its plummeting (as opposed to flying upwards) as “an odd stylistic choice.”  Others, however, have made much more of this choice. 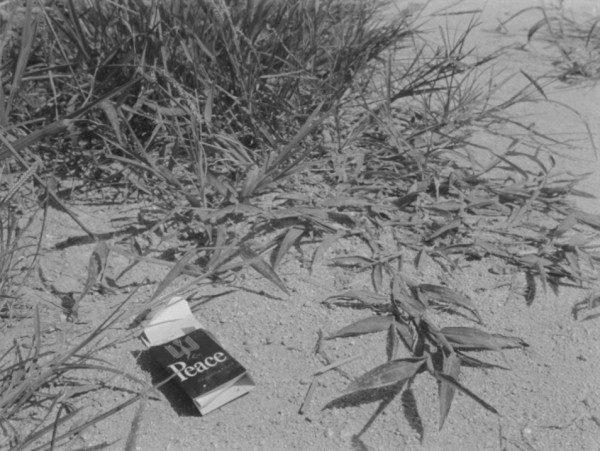 The dove itself is plummeting downward. It looks almost like an airplane, or more specifically, a bomber. The dove is not falling from the sky. It is diving toward the earth. Strange behavior for the symbol of peace. The tail, feathers shaped in a V, the Great War’s symbol for victory, adds yet another layer of metaphor to the iconography. What does this dove represent anyway?

Perhaps it’s the image of the allied victory over Japan. Peace from above, enforced on a nation that lost, printed on a cigarette package.

Hiroshima’s Mayor Shinzo Hamai ushers you into his office. You sit down and he offers you a cigarette, somewhat ostentatiously displaying the brand name — and then reading it aloud for you.

“Peace cigarette,” he says with a faint smile.

In conversation he allows that few of Hiroshima’s citizens of today hold a grudge against Americans in general for the bomb.

But he makes it clear he believes Harry Truman should feel a little guilty about the decision to drop it. “I wish he wouldn’t keep making statements that his conscience isn’t bothered by it,” Hamai says.

So, yeah, Lowey’s “Peace” bird is the bomb. And plenty of smokers have noticed the irony.

…at the annual Festival put on by the undergraduates at the University of Tokyo, where each group of six room-mates had a showcase exhibition made of papier mache. A typical one showed Kennedy and Khrushchev sitting comfortably opposite each other smoking endless packs of Japan’s favorite cigarette, the Peace cigarette, with an ashtray between them —and the ashes were fallout. 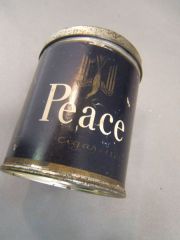 The Red Army had a lot of people until they started doing violent actions and the police started cracking down. In the Fall of ’69, they announced themselves publicly — “We are going to have an underground army, and we are looking for weapons.” They were making “Peace can bombs.” I don’t know if they still have them, but Peace cigarettes used to come in these little blue cans, so you could take the can and load it with pachinko balls and an explosive. 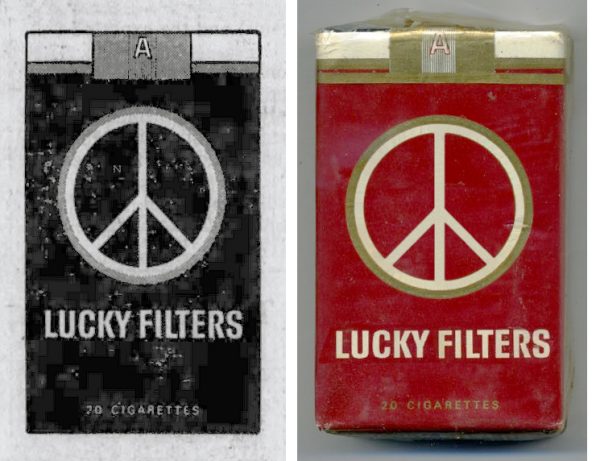 In 1970, in an effort to capture a larger share of the youth market, American Tobacco found itself at the center of an unwanted controversy.

They published a newspaper ad with an illustration of a Lucky Filters cigarette pack in which they had replaced the Lucky Strike “bulls eye” with a peace symbol. And below that was printed just one word: “Peace” (set in Rudolf Koch‘s typeface, Geometric 231 Light)

The blowback was swift.

Seen the new Lucky Filters package? A peace symbol, by George! That will freeze the aerospace people and their cohorts in the Pentagon into terror at the awakening masses.

The minor tempest caused American to prepare a statement.

“For many years, ” it began, “tobacco symbolized peace as reflected in the wide use of the peace pipe by the American Indians years ago.”

This was nonsense, of course. By replacing their bull’s eye with a peace symbol, the  company was obviously targeting left-leaning American youth.

What had they failed to realize? That, for those on the right, the peace symbol was more like a red flag to a bull.

The ad was prepared by ad agency, SSC&B (Sullivan, Stauffer, Colwell & Bayles). We delved deeper into their plans for the campaign, however, and some other facts have come to light. 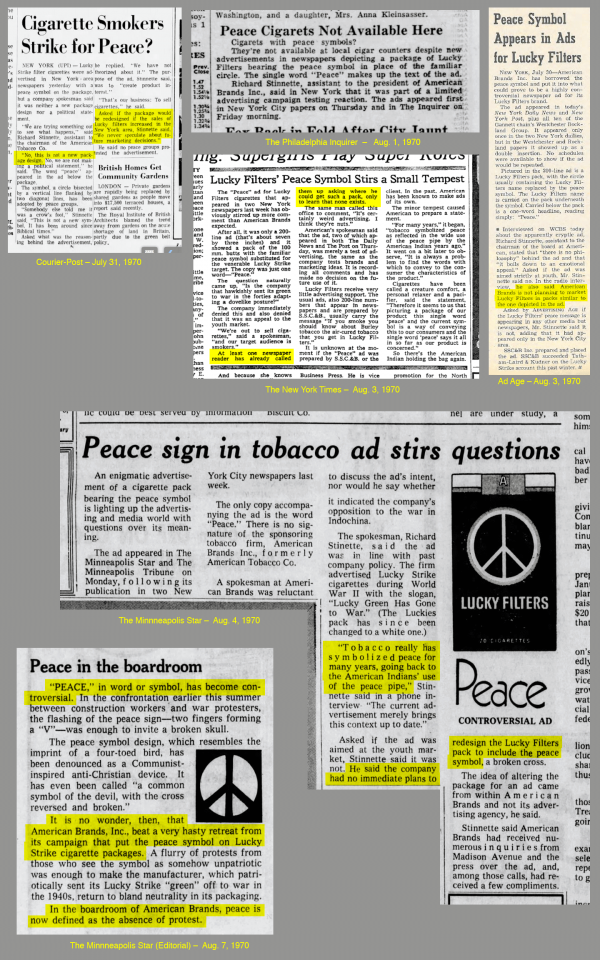 “☮“ a recognizable symbol of the contemporary American scene

For one thing, they had originally planned a whole series of ads combining “recognizable symbols of the contemporary American scene with one-word captions.” In addition to “peace,” the other concepts included “Daisy, Relax, Lightsome, Break, Vote.” What corresponding visual symbols would they have used? I have no clue. The brouhaha that they ignited by running the peace ad, apparently extinguished the rest of the campaign.

Another thing, is that they seem to have been well aware that the “Peace” symbol ad might not be well received in the more conservative Southern states. 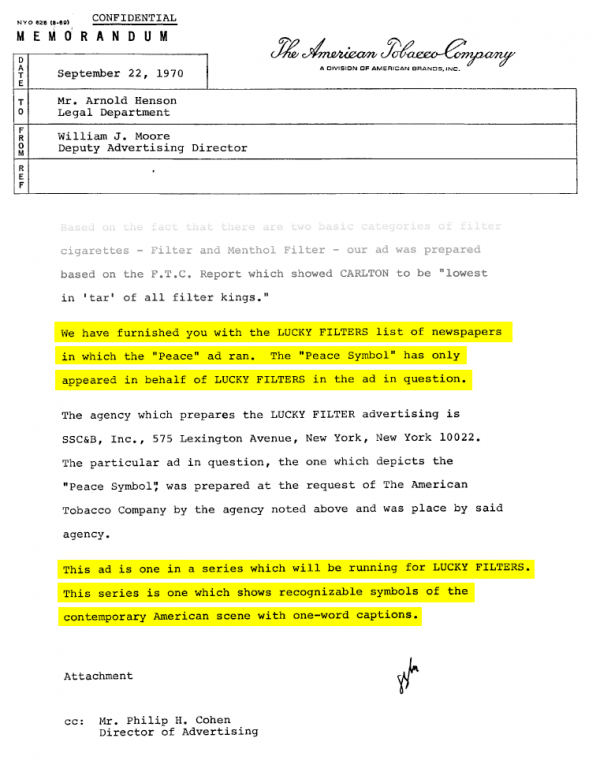 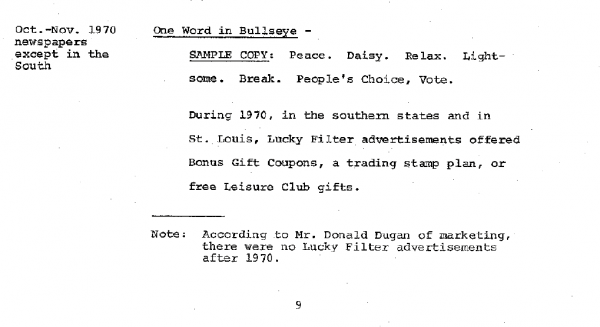 Read the press clippings about the ad controversy and you’ll notice how adamant the company’s spokesman was about the Peace Pack. “No, this is not a new package design.” But was he telling the truth?

Looking for evidence that the Lucky Strike peace symbol pack might have been more than a one-off newspaper illustration, I hunted for a smoking gun.

And I found this memo from SSC&B outlining the estimated cost of preparing “the Lucky Filters Peace Pack, Carton and Shipping Carton.”

If they had truly intended for the “Peace” pack only to appear in a couple of NY Newspaper ads, then American Tobacco would never have asked anyone to design a “Peace Pack” shipping carton! No way.

Perhaps they were just planning to release “limited-edition” promotional pack, but they were certainly giving it serious consideration as a new package design. 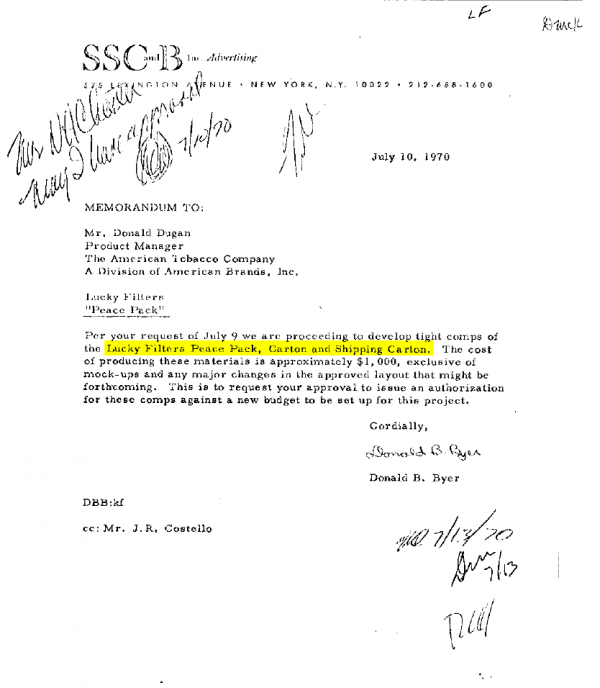 Which is why it made sense for us to simulate what the actual pack might have looked like. The original photo is from the Kentucky Historical Society collection.

“Filter Fallout” and other fun facts

If the two Raymond Lowey cigarette packs don’t convince you that cigarette smoking and nuclear annihilation are related, then consider these additional facts…

1. In 1946 the Courier Journal published an article entitled “Roll Yourself an Atom Bomb.” The author began with a metaphor: “This ‘atomic cigarette’ is in principle quite easy to manufacture — you merely substitute some plutonium for tobacco and then duck.”

3. Ted Taylor, another Los Alamos physicist once lit a Pall Mall cigarette with a nuclear bomb.

4. “Filter Fallout” was the term that Phillip Morris Tobacco coined to describe “the inhalation of fibers released from cigarette filters when the smoker inhales.” (1962)

5. Cigarettes have always been a little radioactive.

« Feel Free (to be part of a General Mills trademark)
Packaging in the news: historic frozen cherry pie box »