We now return you to your regularly scheduled program, already in progress: Photogram Packaging.

…What do I mean by “photogram packaging?” I mean packaging that incorporates good old-fashioned cameraless photography.

László Moholy-Nagy and Alexey Brodovitch came to the United States in the 1930s. Both men were European designers. Each established himself at an art school — Moholy-Nagy at New Bauhaus in Chicago and Brodovitch at the Philadelphia Museum School. Each gave classes in which they taught their students how to make photograms. Needless to say, they influenced a whole generation of designers.

That photograms can be adapted to commercial use has been demonstrated in recent months though not to any notable extent.

The [photogram] work of Lester Beall has attracted considerable attention and will probably lead to a more cordial acceptance of the technic in advertising illustration, particularly for cosmetics and fashions. It should also prove effective eventually in package design.

In the 40s and 50s, plenty of packaging pundits believed that “photogram packaging” was the wave of the future.  The future developed differently, however. Yes, there were some packages designed to include photograms. But it never really caught on. At least, not to any “notable extent.”

I was reminded of photograms when I first started looking at Alessi’s early flatware packaging. Those boxes with their black & gray patterns of silhouetted cutlery looked like photograms to me. On closer inspection, however, they turned out not to be. Although, you could certainly say they were “photogrammatic.” (photogram-ish ?)

Similarly, I found many packages which included graphics with the silhouetted look of a photogram, but none of its shadowy, photographic shading.

I did, however, find a few notable examples where actual photograms actually appeared on packaging. (We look at 3 of them, after the fold…)

In 1947 Paul Rand wrote that photograms offered “…not a picture of the object, but the object itself…” (See: Advertising Photograms)

Rand’s words suggest an alternate type of product photography. What if retail packaging featured actual-sized shadow-images of the products they contained? Instead of the deceptively glamorous hero shots that we’ve become accustomed to?

Rand’s design for El Producto with its photogram of cigars and glass ashtray is, perhaps the best example. He used the same photogram, rotated 180° in two different versions of the box shown above.

…[in] his 1952 cigar gift box for El Producto, he upturned the traditional formula of an embossed engraving of a historical vignette or figure in favour of a ‘cigar album’ with a photogram of different cigar styles. “What’s the big deal?” he said of the radical concept. “I was just showing the cigars.”

Showing the product on the outside of the package is always good. Why didn’t photograms appear on more packaging from the fifties? In his 1942 essay entitled, Black in the Visual Arts Rand states that “the visual power of the photogram lies in its black, white, and gray tonality.”

Yet, the very “black, white, and gray tonality” that Rand was championing above may provide a reason why photograms were never used more widely as product photography in package design.

Even Rand’s own “Cigar Album” resorts to colorful typography and graphics along the edges of the box. It’s really the contrast between the somber photogram of cigars and the colorful edges of the box that gives it so much impact.

It’s a gift package, so the ads say, in time for the holidays but with a new look that the G.H.P. Cigar Co., Philadelphia, and the William H. Weintraub agency, New York, hope will ring cash registers year ’round. The Cigar Institute estimates 20% of all cigars smoked are gifts.

This El Producto Cigar Album is both an eye-catching gift case and a variety package. It contains 25 El Producto cigars in 5 different shapes and sizes separated by dividers that emphasize the variety feature and break up the usual monotony of row-on-row cigar packing.

To convert the time-worn cigar box to a high-style gift item without resorting to the usual gift wrap or sleeve, Weintraub art director Paul Rand topped it with a black background photogram cover suggesting the 5 cigar shapes and sizes. The brand name on cover and sides develops counterpoint in color. The inner lid is embellished in color with the dignified El Producto mark to add a note of distinction found on expensive book bindings.

The whole package is designed to double as a stopper on cigar counters and an acceptable top-of-the-table container at home. Advertising in magazines and newspapers promotes the album alone and in company with the balance of the line of El Producto cigar boxes dressed in colorful wraps for Christmas and other gift occasions. 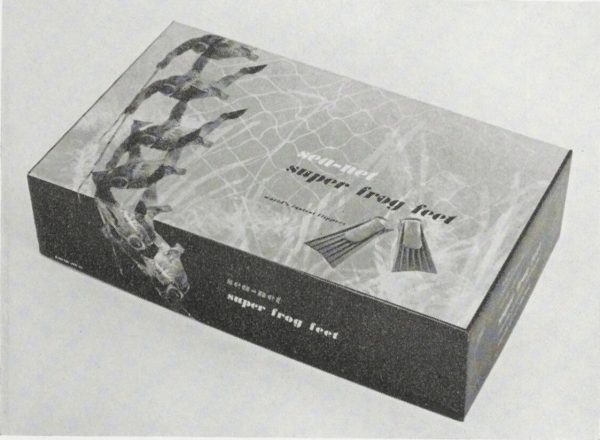 Porter was geographically well-positioned to design packaging for scuba equipment. He was based in Los Angeles from the 1950s to 1970. He and his partners at various firms (Allen Porter Design, Porter Goodman Design Associates, Porter Goodman Cheatham) actually designed quite a bit of packaging for companies manufacturing skin diving gear.

Sea-Net Manufacturing was of these companies. Porter designed a line of packages for them in the late 1950s using photograms.

A new box designed for an underwater diving equipment firm employed a photogram, rather than a photograph, of an underwater scene. It uses a multiple print of one diver to give new dimension to the photo, to suggest action and use of the product. There is also a straight photograph of the contents incorporated into the cover design.

Of course, abstraction might also be another obstacle that prevented “photogram packaging” from ever really breaking through in a bigger way. Over the years, consumers have probably learned how to correctly interpret an abstract product image. But in the 1950s, it may have been difficult for designers to sell the idea to their clients. 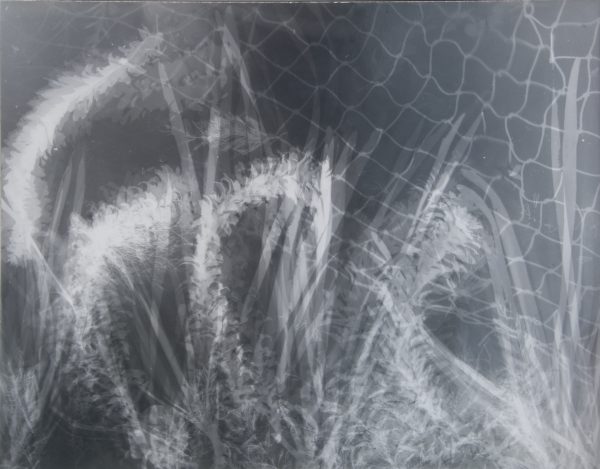 
Porter developed his penchant for photograms while studying at New Bauhaus (Institute of Design). This was the Chicago art school, founded by László Moholy-Nagy, who is also well known for photograms. 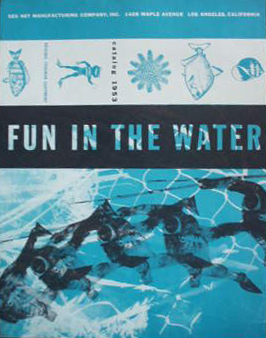 I haven’t been able to find a color photo of the “Sea-Net Super Frog Feet” box, but I do know that it was printed in “two shades of blue.”

Package for swim fins in two shades of blue.

Diver is a multiple print of a single photograph which overprints a photogram background of underwater plant life, netting and shells, made in the darkroom in a developing tray. (USA )

The cover of Sea-Net’s 1953 catalog has the same multiple sequence of diver as Porter’s package design. It also has the same photogram in the background. Since those two things are the same, I figure this is also the coloration that appeared on the packaging. 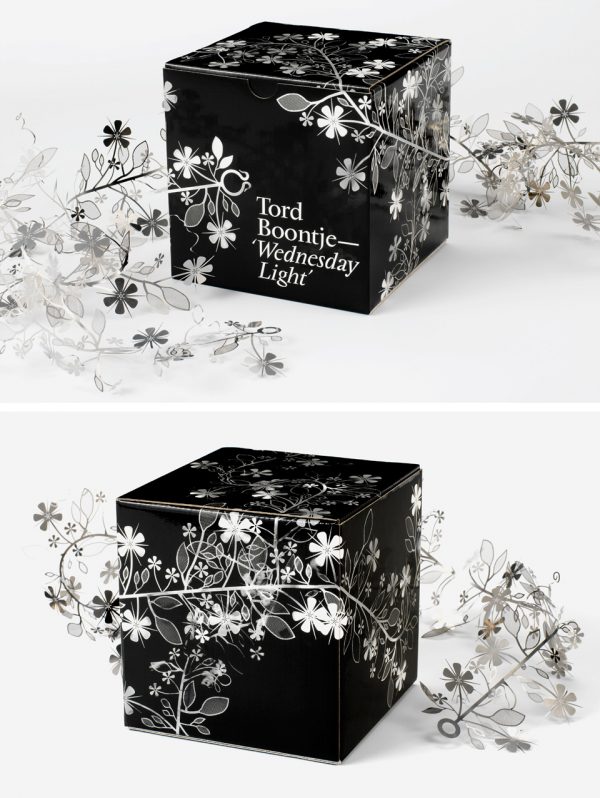 The original version of Boontje’s iconic light consisted of a delicate garland of thin steel flowers wrapped around a lightbulb. The artwork for the packaging was created in the darkroom. Sheets of photographic paper were attached to the box and then wrapped with the garland light. Each face was exposed to the light to create six photograms that combined to make a single seamless image. 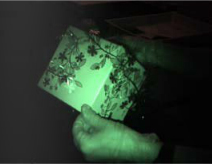 Like Rand, GTF revealed what was contained within the box by using a photogram of the product created on the outside of the box. Or, looked at another way, GTF used a photogram as product photo. An actual size, cameraless product photo.

Taking a prototype of a specially commissioned box into the darkroom, GTF covered it with photographic paper, then wrapped Boontje’s light (made of laser-cut steel) around it. After exposing the whole box they were left with a photogram of the steel shapes. GTF’s Paul Neale realises they could have produced a similar image more easily by directly scanning the light itself, but argues it would have looked too ordinary.

The New Handmade Graphics: Beyond Digital Design
by Anne Odling-Smee

Paul Neale acknowledges above that a similar image could have been scanned, rather than photogrammed. Yet, he justifies the old-school technique by saying that a scan “would have looked too ordinary.” Even so, Neale’s photogram differs from a scan in more ways than its “look.”

By folding photo-sensitive paper around the box, he did something else that would not have been possible with a flatbed scanner. He created an (arguably) 3-dimensional photogram for a 3-dimensional package. In other words, he folded 2-dimensional media around a 3-D object.

To me, this is something more akin to those orthographically-projecting boxes that we’re so fond of.