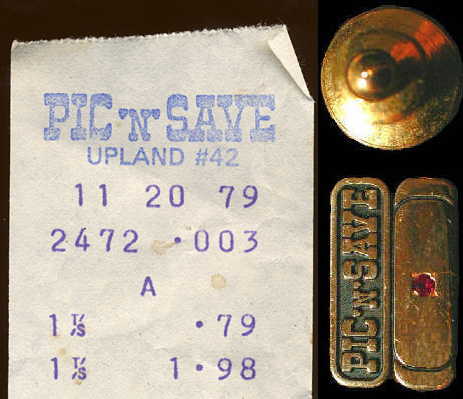 a discount superstore known for its fabulously white trash appeal

I done gone pick me up one of them outfits at the Pic‘n’Save after I get off work from Denny’s.

In the mid-sixties my family used to shop at the now defunct Pic‘n’Save in Atlantic Beach, Florida.

Besides buying several seminal albums of of my youth there—(Sergeant Pepper’s, Between the Buttons, et al.)—there were two interactions with other customers that I’ve never forgotten.

1. Foodstuffs: My two younger brothers—one pushing the other down one of the food aisles in a shopping cart—were scolded by an unusually well-spoken grey-haired lady saying, “People put their foodstuffs in there!” We knew what “food” was and we knew what “stuff” was, but that was perhaps the only time in our lives we’d ever heard anyone speak the the word “foodstuffs” out loud.

2. The Dress: My mom had a yellow & orange, 1960s sun-dress—(that I believe was purchased at J.C. Penney)—with pompoms along the hem. She was wearing this dress one day when we were all grocery shopping at Pic‘n’Save, and my youngest bother got briefly lost and then, catching sight of her dress, he ran up and hugged her. Noticing that his hands, for some reason, were not reaching completely around her, he looked up. The woman looking down at him was not Mom, but a much heavier, somewhat perplexed woman, wearing the same dress.

(A possibly fake, foreign Pic‘n’Save store, after the jump..) 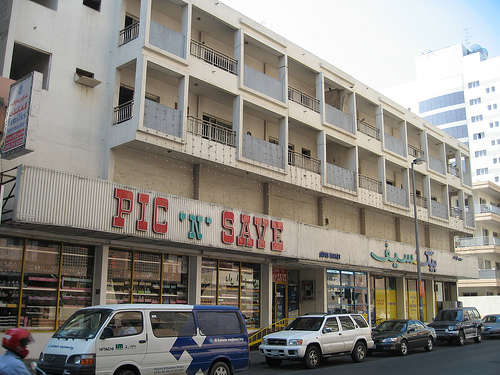 However, according to what I’ve read, Pic‘n’Save was only ever supposed to have stores in the U.S. until it was bought out by Big Lots and killed off. So I’m wondering if this store is some sort of counterfeit franchise… ?