We ended Friday’s post with a package-related drinking gag.

Thinking we might stick with that theme for one more round, I was reminded of the “Plastered Plumber” Whiskey Dispenser. (Photos above are from the basement of  Allee Willis’s Bubbles the Artist site.)

This product is from 1961 and can be found occasionally on eBay, which is where I found the photos below. A package-related accessory for liquor bottles, serving a certain sense of humor, but no practical purpose. 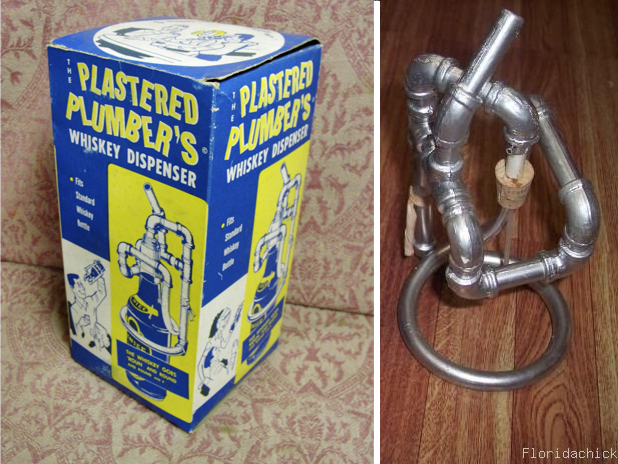 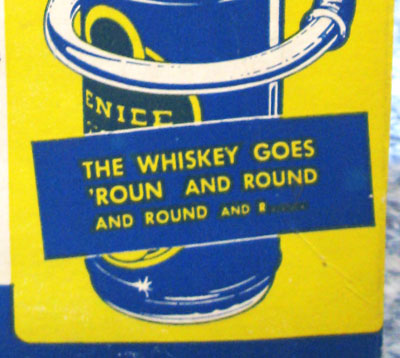 …but the first ‘round has an apostrophe in front of it while the rest of them remain bare. Not to mention that the first roun is missing a D.

Perhaps diminished capacity on the part of the art director after sampling the product accounts for the diminished punctuation.

I have to agree that it looks like very sloppy ’60s proofreading. (Not that I’m anyone to talk about scrupulous proofreading!)

Anyway, I have an almost completely unrelated, earlier example of the term “plastered plumber” being used…

(Another plastered plumber, after the fold…)

(Click the bitmapped image above to watch this news footage on BristishPathé.com)

Last week, while 2,000 votaries shouted encouragement and police yelled threats from below, a plastered plumber named William Painter perched cheerily on Eros’ neck and wings, twanged gaily on the god’s bowstring, and provided one of the week’s merriest, wackiest newspictures. After 40 minutes, London’s firemen brought the miscreant down to earth. Next day both celebrants were resting quietly; the plumber in Brixton jail, the god in the hands of statue doctors. Damage to the god: $192. Damages to the plumber: three months in stir, and cost of the repairs.

Actually, Painter did not have to serve out his 3 month sentence after all…