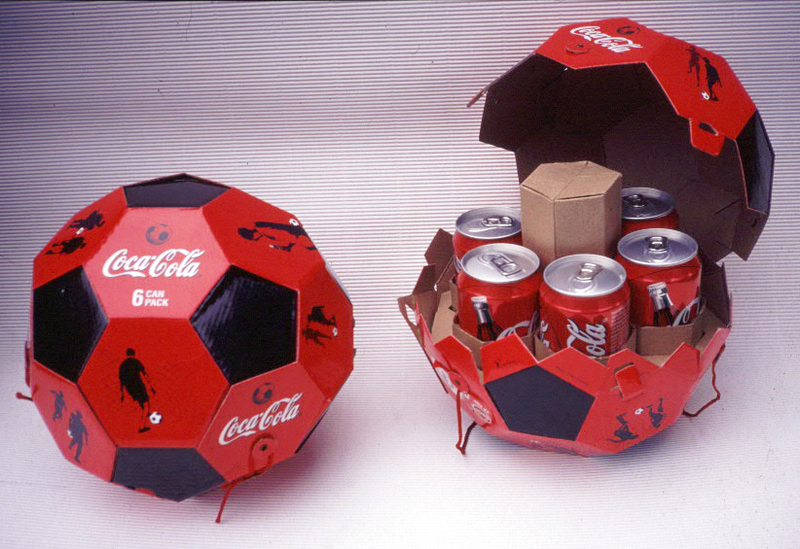 As much as I’d like for there to be some great packaging based on an unusual polyhedral structure, I don’t think this is it. I think this one’s pretty impractical. Obviously meant to resemble a soccer ball —(and probably timed to coincide with the World Cup Tournament)—this pack also happens to be a truncated icosahedron. It matches the atomic structure of a “buckyball” (or fullerene) molecule—appropriately named after Buckminster Fuller.

On left: a model of the Buckminsterfullerene (C60) molecule; on right photo by Dave Rogers from his Flickr set of the Installation of the buckyball onto the roof of University of Bristol Centre for Nanoscience and Quantum Information

But whereas the fullerene (C60) molecule is purported to be the most spherical and symmetrical of the known molecules—(and an important milestone in the field of nano-technology)—this soda package is a study in wasted space and materials. A six-pack with an insert filler of cardboard where a seventh can of soda could have easily fit.

I know it’s a special promotional package and not meant for day-in-and-day-out production. I’m just sorry to see such a great polyhedral structure so badly miscast in this inefficient role.

(another disappointing buckyball pack follows after the jump…) 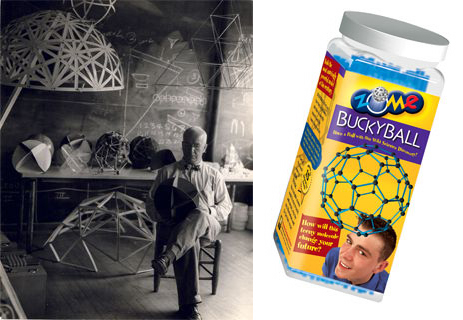