This month I found the left hand photo above by Gerard Westendorp with the instructive caption, “Crumple 8 milk cartons into a torus.”

There must something mathematically fundamental about milk cartons. Since Dutch physicist, Westendorp is not the only mathematically-inclined artist using milk cartons in this way. (See also: A simpler approach to auxetic package design)

I like that he calls his cartons “crumpled” rather than “creased” or “folded.”

As if he merely crushed them and they naturally assumed this torus-shaped form. Of course, that may just be a translation thing. 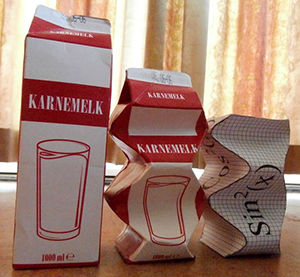 Which, I suspect, is how Victor Alexandrov came to use the word “crush” in the title of his seminal paper, “How one can crush a milk carton in such a way as to enlarge its volume.” (Note: The milk cartons that Alexandrov crushes-to-enlarge are the tetrahedral Tetra-Pak type)

And yet, there are naturally occurring geometric patterns that can emerge from mere “crushing.” (See: Shell buckling toilet paper roll.)

Aside from his milk carton torus, Westendorp also folded a milk carton into a sine wave shape. (above right)

In addition he has designed a number of hinged polyhedra. One of which appears to be related to his finalist entry for the 2008 Pro-Carton “Young Designers Award.” 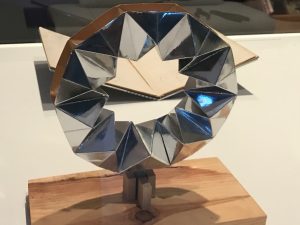 Ruth Asawa‘s 1984 paper maquette (on the right) tell us that her 1986 sculpture, Aurora, had more to do with origami than milk cartons. Seen alongside of Westendorp’s milk carton torus, however, it’s clear that she could have constructed it with milk cartons.

Which is less farfetched than it may sound, considering that Asawa did indeed use milk cartons to make sculptures. (Especially with children.)

(more about Ruth Asawa, after the fold…) 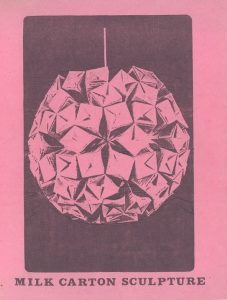 Asawa enrolled in the now-legendary Black Mountain College where she studied, from 1946 to 1949, under artists including … architect/inventor Buckminster Fuller.

… In 1968, Asawa, Sally Woodbridge, and other parents with children at Alvarado Elementary School cofounded the Alvarado Arts Workshop. With limited funds, they gathered everyday materials, such as milk cartons and egg cartons, and invited local artists to work directly with the students.

The same milk carton polyhedron (shown in the pink flyer above) can also be seen in near Bucky Fuller in this video excerpt from Ruth Asawa: of Forms and Growth.

Ruth Asawa and her husband Albert Lanier (an architect) both studied under Fuller at Black Mountain College.

Ruth and Albert met Bucky and Anne Fuller at Black Mountain College in 1948. Both studied with Fuller. …Ruth cut his hair (she made extra money barbering) and Fuller in turn made her a barber pole from venetian blinds.

In one of Fuller’s reference letters for an Asawa Guggenheim application, he is quite generous with his praise: “I state, without hesitation or reserve, that I consider Ruth Asawa to be the most gifted, productive and originally inspired artist that I have ever known personally.” She also received the first Dymaxion Award for Artist-Scientist in 1966.

Ruth credited him for her educational direction: “He inspired me to work with young children. When I asked him what should I do in the schools, he said ‘Give every kindergarten child a PhD! Create an environment and learning will take place. Work directly with the children.’ I took his advice.”

Yes, I am declaring today the first day of “Polyhedral Milk Carton Week.” Can’t tell you yet what it will include, but if other declared “weeks” are any indication, we will be crushing it. So to speak.