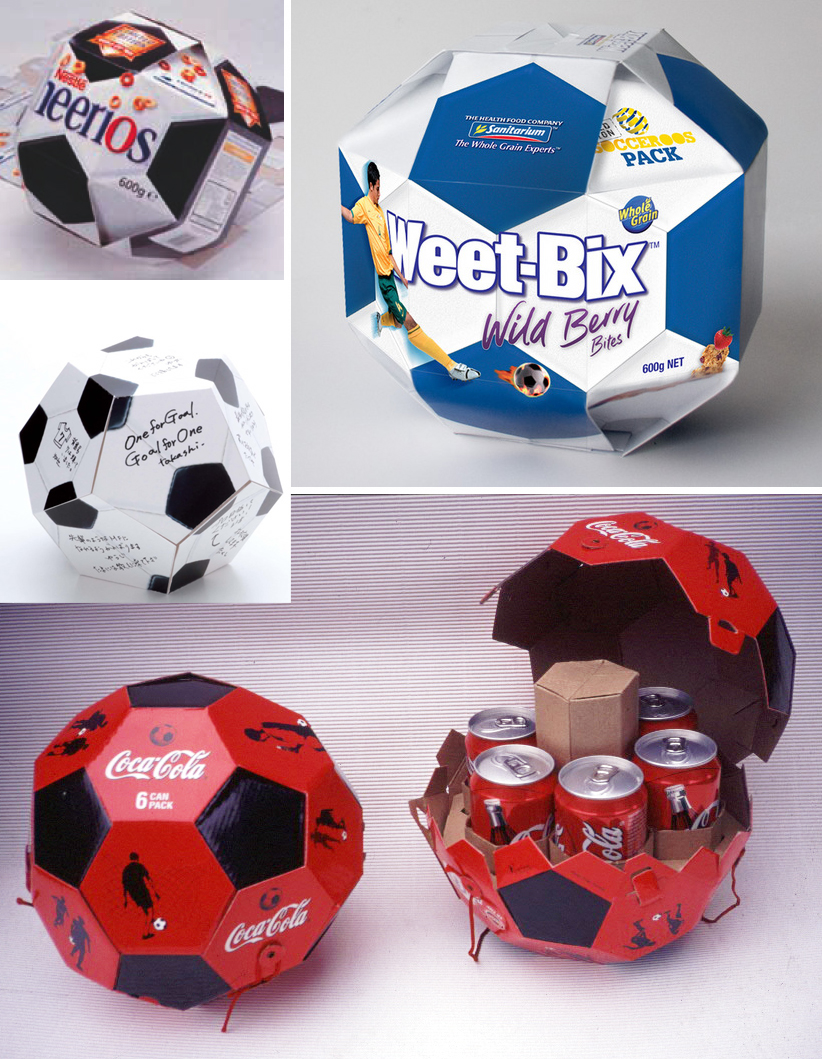 I know. The World Cup is over and this post might have been more topical a couple of weeks ago.

I just couldn’t let another year slip by without comparing these polyhedral packages. So I’m coming back to the subject of World Cup, ball-shaped packaging, after the fact. And since I’m American, I’ll be calling it a “soccer ball”…

For package designers wishing to construct a soccer-ball-shaped pack, the underlying geometry is the truncated icosahedron (i.e.: an icosahedron with its vertices cut off). The die-line of a true truncated icosahedron shaped pack will be pretty complicated. While a normal rectangular carton has 6 sides, this box will have 32 sides! Adding in a number of tucks and glued flaps, your looking at a difficult and expensive printing and folding project.

Consequently, carton makers will make geometric compromises to bring costs down. The Cheerios box and the Weet-Bix concept box are simplified soccer balls. Some panels of the boxes are square, they have no pentagons, and some of the soccer ball’s hexagons are merely printed. Still, they’re fairly symmetrical and look enough like soccer balls to appeal to World Cup fans.

The small black & white “soccer ball” with the writing is a folded novelty-stationery/invitation thing. What’s striking about it, is that the geometry of the dodecahedron shape and the printed soccer ball pattern don’t match up at all—although they could have been made to. (As a result, the pattern looks a little like the Gateway cow spots.)

The only one of the packs that is geometrically a true truncated icosahedron is the 2002 Coca-Cola polyhedral six-pack. Clearly demonstrating that the soccer ball was never a good shape to efficiently contain six cylindrical soda cans.