I guess “hourglass packaging design week” is now done, but while searching for small waisted cereal boxes, I happened upon this television commercial for a dietetic breakfast cereal that I had never heard of: Post Size 8.

From the archives of the Benton & Bowles advertising agency, this commercial has been taken by many people as proof that this product was on the market in 1969.

I’m not so sure that’s true. To me, it looks more like a sketch for a proposed ad campaign. And finding no evidence anywhere else of this product’s supposed existence—no published magazine ads—no cylindrical “Size 8” cereal boxes coming up for sale on eBay—I doubt that this product ever actually made it onto supermarket shelves. 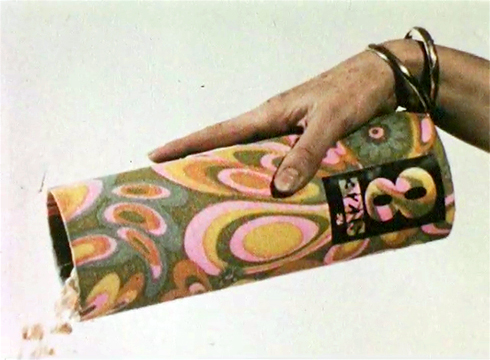 Interesting that they would contemplate this specific dress size as the brand name for their cereal. I don’t know dress sizes from Adam, but my sense from the context is that for a woman to be a size 8 was apparently highly desirable, at least in 1969.

According to a 2003 press release, however, from Fitnesse (another, more recent diet cereal brand): “Women today are not striving to become the size 8 that is traditionally every woman’s ideal.  More than 61 per cent of women said they would be happy to get down to anything between a size 12 to 14 – the perfect size for them!”

Note: soundtrack for the commercial is an instrumental version of Felice & Boudleaux Bryant’s 1958 song, “All I have to do is dream.”

(The General Foods trademark document, after the fold…) 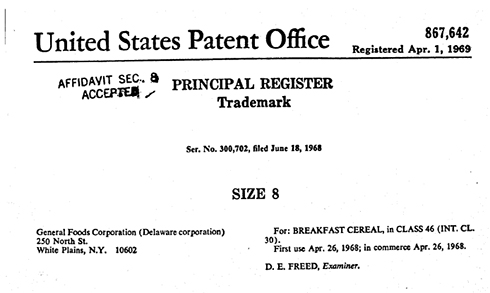 « Cereal Boxes with Waistlines
The Shook Up Shopping Cart »