Yesterday’s post about artist, Paul McCarthy’s ketchup bottles included one photo of a particularly foul-looking bottle of Daddies Ketchup. If you wondered why it was so dirty and unappetizing, we now have the answer…

That bottle (and the packages, above) are among the props that McCarthy used (and reused) in his performance pieces. The photos are from a series of Cibachrome prints mounted on aluminum and reproduced in a book entitled, Propo.

“PROPO is a collection of color photographs of the soiled props used in McCarthy’s performances between 1973-83. After this period, the artist packed away the objects of his perfomances in a big trunk. In 1991 he opened the trunk full of props, and photographed them one by one. The photographs are of dismembered toys, dolls, stuffed animals, bottles, masks, and utensils which have been transformed into besmirched and befould emblems.”

Not the sort of “hero shots” that a manufacturer would choose. Do images like these besmirch the brand image? Probably, but, like parents watching their children leave home, once your consumer packaged goods are sent out into the world, there’s really no telling what fate awaits them. (See: Packaging & Moral Turpitude)

If you’re curious to learn the stories of these specific packages —(and the prurient roles they’ve played in McCarthy’s performances)— there are some videos: here.

(Another packaging photo from Propo, after the fold…) 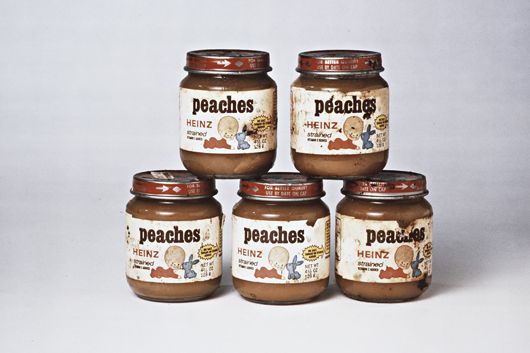