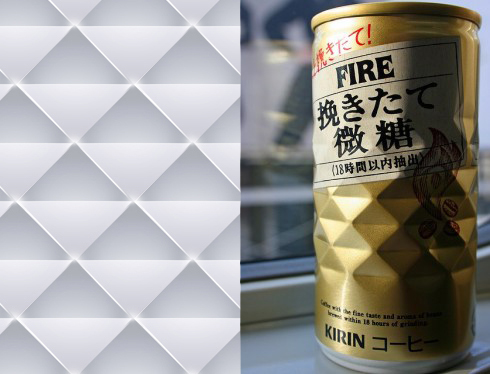 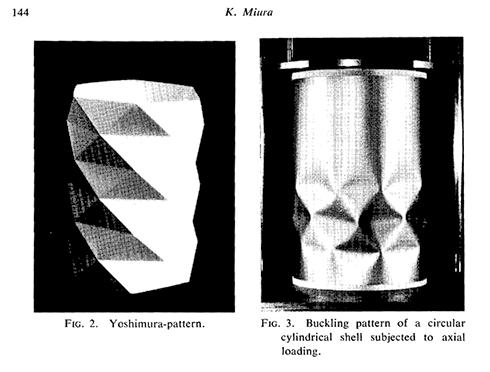 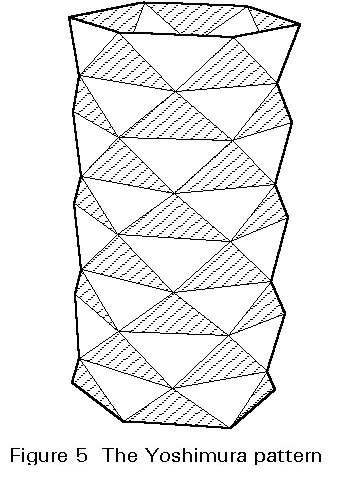 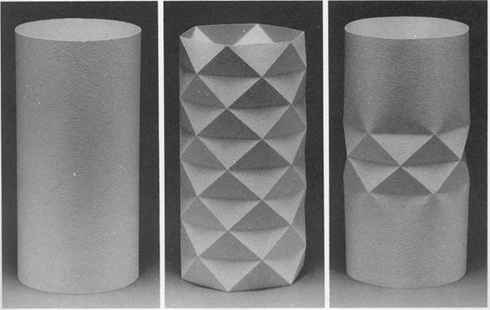 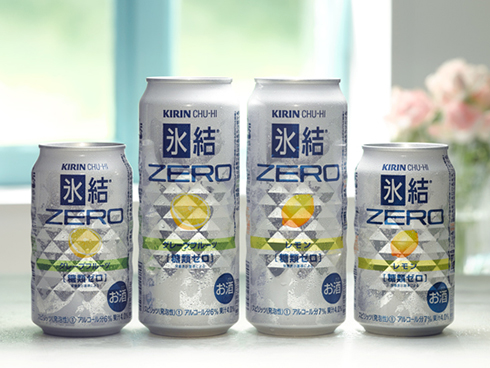 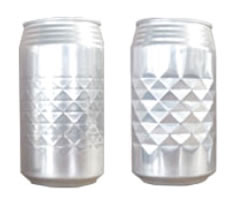 (More about pseudo-cylindrical concave polyhedral packaging, after the fold…) 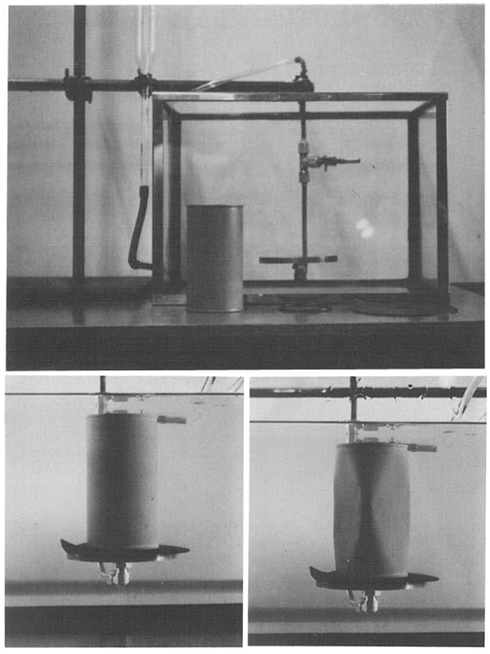 One simple method, originated by Horton at Stanford University, in the early sixties, for obtaining accurate isotropic cylindrical shell specimens inexpensively is the use of seamless beer or soft drink cans. Since these thin-walled cans have to be within the close tolerances demanded by the automated filling and sealing process, they represent a source of specimens with accurately repeated dimensions. Recently this idea has been revived by Arbocz and Elishakoff at Delft University of Technology in a test program related to stochastic stability analysis and at the Technion Aircraft Structures Laboratory in a test program on buckling of shells under axial impact. A special production run of empty steel beer cans without paint and without closing lids has been made, yielding specimens with (R/t) = 300. The shells have, however, an integral bottom end closure, which has to be removed, some axisymmetric thickness variations with height and quite significant residual stresses. These have to be studied further for more precise evaluation, but even now, though undefined, they are practically identical for the many specimens made by the process.

More recently, Jan de Vries cited the extensive use of beer cans as specimens at Delft University of Technology’s laboratories, in his 2009 thesis entitled, “The Imperfection Data Bank and its Applications.”

His introduction begins with this poetic entry, empathetically written from the point of view of an anthropomorphic beer can whose shelf life was so drastically altered by rocket science: 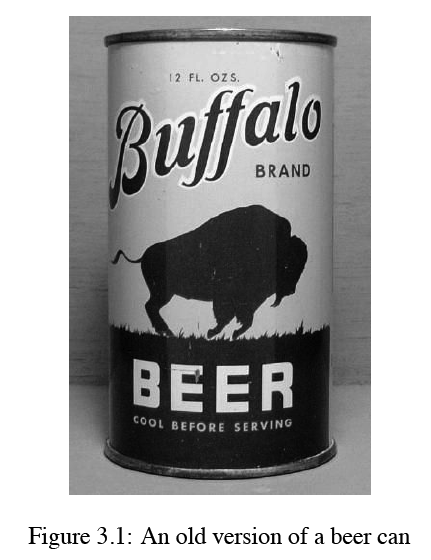 The beer can was denied its original purpose in life. Before it got to the filling station in the beer plant, it got removed from the machine to be of use in the investigation of imperfection sensitivity of thin-walled shells. As it found out what was going to happen, the beer can reconsidered what to do. It could not taste the beer it had waited for for so long. However, this was not an unrealistic thought. Serving as a container for some liquid, whilst not being able to drink, and waiting for some person to come along and empty you and then get thrown out of the window if you were unlucky, or get recycled if you weren’t. No, one had to look for new opportunities. What was this imperfection sensitivity all about? Thin-walled shells, that is me, it thought. Am I alone in this world or are there more like me? Yes, I know lots of fellow beer cans. Even some vague far away families who prefer cola or orange juice even. But they are all small like me. The can then found out that there are huge shells, dinosaur tall compared to him, but not extinct. They did not contain stuff like beer, or coke, but very interesting sounding stuff like LOX or LH2. The can did not know what kind of stuff this was, but realized this: these big brothers were about to fly to the moon, to Mars or even maybe out of the solar system. No short life time, no low mile coverage, no, just your ordinary Saturday evening getting sold, getting drunk and getting thrown away. These guys really went somewhere. Now this was something to think about. The little can thought that even though he could not fly into space, it would also mean a lot to him if he could in some way help his big friends to safely fly into the sky.

Jan de Vries
The Imperfection Data Bank and its Applications

One more thing: as a pattern based on the geometry of collapsing cylinders, it’s not surprising that one of a myriad of patents for collapsible beverage containers, includes one based on the Yoshimura pattern… 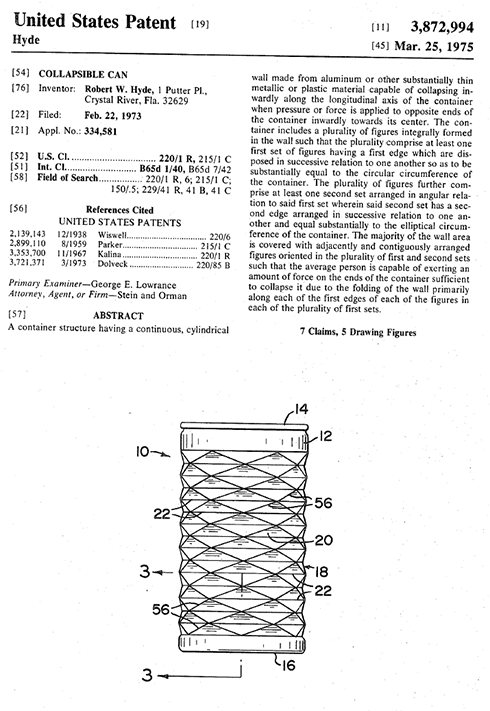 And while we’re at it, here’s the 1992 patent assigned to Toyo Seikan, covering the similarly structured, diamond cut can pattern… 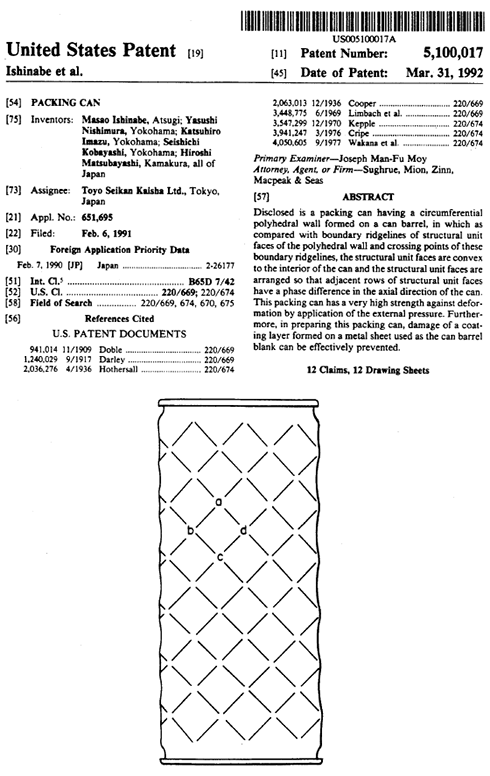