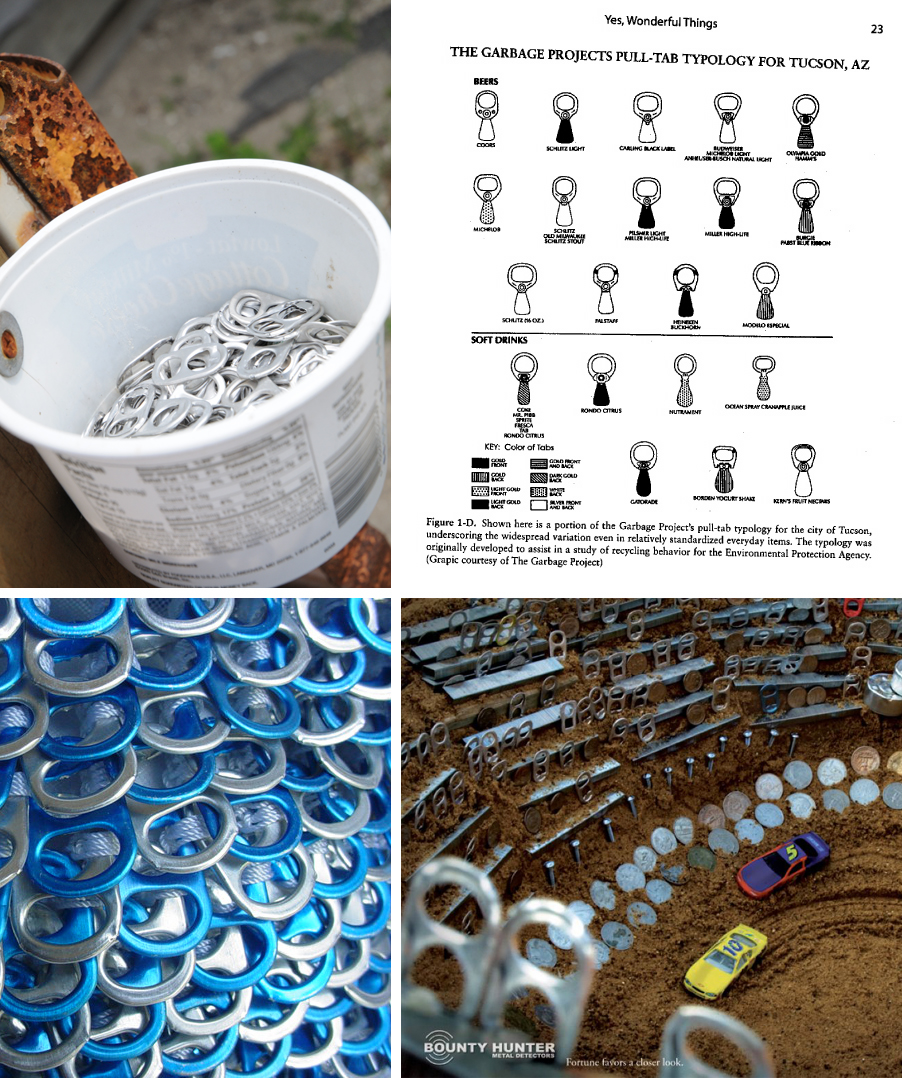 1. Collection Container: Went to Reeds Beach last weekend and I noticed this cottage cheese container (upper left) nailed, chest-height, to a post in front of someone’s beach house. “What’s that for"” I wondered and peered into it. Beer can pull-tabs. Strange, since pull-tabs have, for some time, been designed to remain on the can. Here, the pull-tabs were being intentionally removed and saved. I noticed their recycling bag and, sure enough, it was full of beer cans, with the tabs torn off. But for what purpose are these pull-tabs being collected?

The opening chapter of “Rubbish!” describes some of what came out of a hole drilled into the Fresh Kills landfill on Staten Island and is called “Yes, Wonderful Things” after Howard Carter’s answer when Lord George Edward Carnarvon asked him if he could see anything upon first peering into the antechamber of Tutankhamun’s tomb.

So a lot of what is observed in “Rubbish!” is an occasion for surprise and amusement. “Of all food that is thrown away (not just ‘waste’ but also inedible rinds and tops), potato peels account for a mighty 7 percent by weight — the largest single item in the fresh-food repertoire.” Yet it was the variety of detachable pop-top pull tabs that enabled Garbage Project researchers to construct an elaborate typology and to tease out data about beverage consumption even from samples of garbage that contained not a single can.

from the NY Times book review of “Rubbish!: The Archaeology of Garbage” by William L. Rathje and Cullen Murphy

3. Craft: Lower left photo is from PopTopLady’s Flickr Photostream. (She has an Etsy store: here) It may be that the person pulling off and collecting the beer can pull-tabs, was doing so for craft reasons. Inventive crafters have found any number of uses for this particular recyclable resource.

Apropos of what actually takes up space in a landfill, I appreciate their attempt to moderate their eco-claims…

We are not silly enough to think that keeping a few pop tabs out of the landfill is going to save the world; but we believe in our hearts that the true power comes from creating beautiful things out of trash. If one person opens their mind just a little tiny bit in the direction that not EVERYTHING needs to be created from scratch just to then be thrown away, a beautiful new bag has brightened the world.

4. Metal Detector Ad (lower right): this image is a detail of student entry in the Lüerzer’s Archive Awards. An ad for Bounty Hunter Metal Detectors (by Diego Contreras, art director & Allie Edwards, copywriter) envisions some of the sort of stuff that a metal detector might help you unearth. (Interesting to note that the pull-tabs, here, represent people.)

(One more image—relating to pull-tabs and the Lüerzer’s Archive Award, after the fold…) 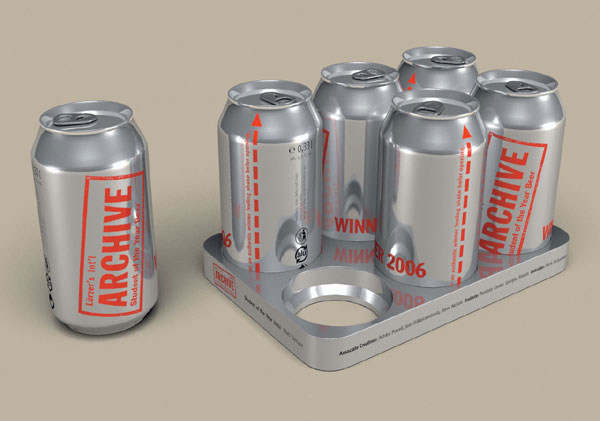 While awards are frequently in the shapes of containers—(think: loving cup)—this is the only award I know of that comes in the form of a six-pack. (With pull tabs.)