“RAT-NIP is a genuine rat confection, rats love it just the way cats love CAT-NIP. Not a rat can resist it.”

–from an ad in the Journal of The Jamaica Agricultural Society, 1911

The hand-lettered Ratnip trademark on left (described as a “drawing with words in stylized form”) to my 20th Century eyes, skews to psychedelic. It reminds me now of certain House Industries fonts. (Not surprising, given that a lot of psychedelic typography was indeed based on early, turn-of-the-Century sources.)

I haven’t been able to find any packaging or advertising with this hand-lettered version of the logo, but, given that the back-slanting, sans-serif logo (on right) wasn’t even registered until 1923, I’m guessing there may be some bottles or jars out there with the hand-lettered logo. All of the packaging that I’ve found so far—(like the box on right from ChangoBlanco’s Flickr Photostream)—uses the 1923 trademark.

When I first saw the back-slanting Rat-Nip logo I figured it was from the 1940s or 50s and that the wacky backward leaning type was meant to imply knocking rats over backwards—corresponding to the upside down victim in the illustration with the lighting bolt.

But another name that appears on the back of some Rat-Nip packages is The Liquid Veneer Company. “Liquid Veneer” was a furniture polish and their trademark, registered in 1906, is strikingly similar to the back-slanting Rat-Nip logo.

In fact, if you take a look at the early “Liquid Veneer” package design—also red, yellow & black; also with a back-slanting logo—it starts to look as if Rat-Nip’s packaging was designed in the “house style” of Liquid Veneer. 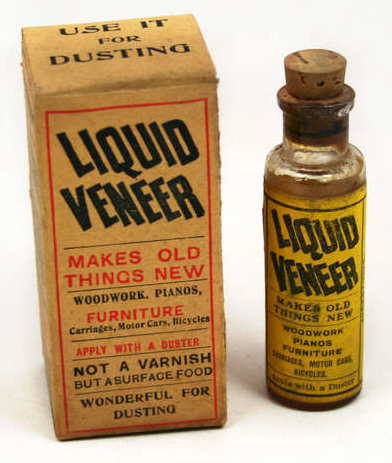 (More Rat-Nip packaging, after the fold…) 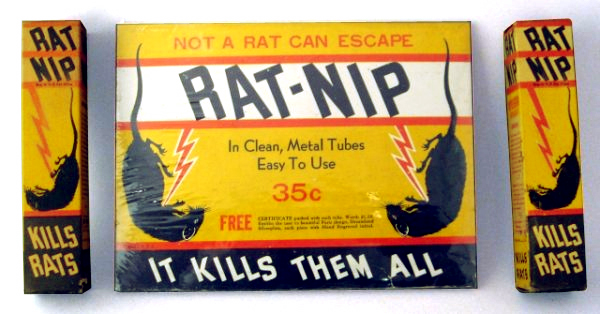 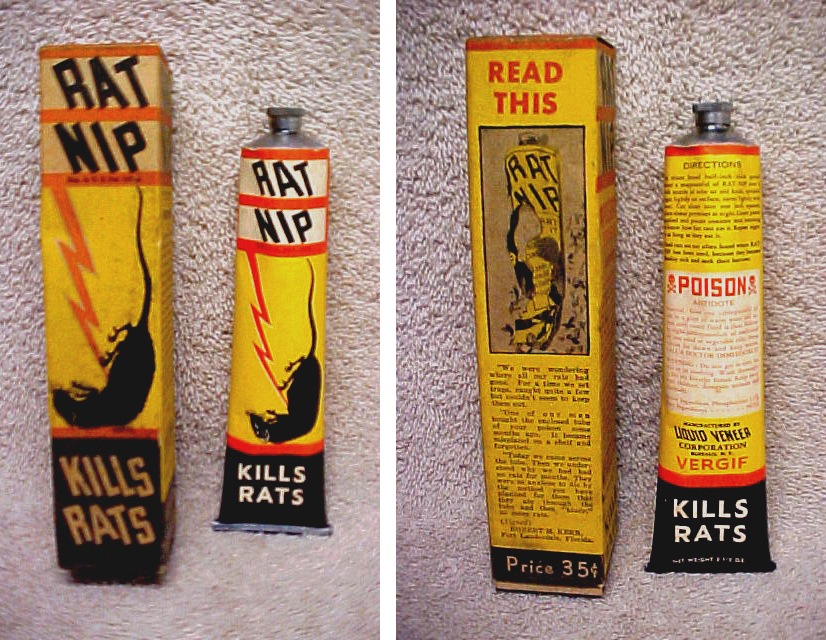 In the photo of the back of the box on right, a picture of the torn up tube of Rat-Nip is a testimonial to the irresistibility of the product to rats. (They will chew through the packaging in order to eat the poison.)

« Rough on Rats
A Slice of Package »