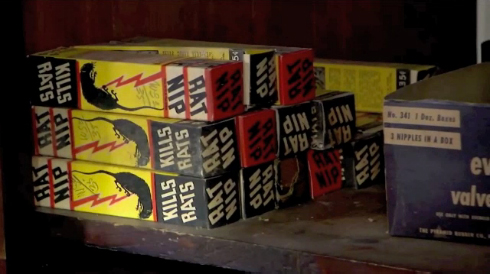 Two weeks ago on a Tuesday, box vox’s page views suddenly quadrupled. It wasn’t a sustained increase, but the post that was attracting all of these new visitors was a post from 2010 about “Rat Nip” —a rat poison dating back to the early 1900s.

“Ratnip” is a keyword that there isn’t a lot of competition for. So little, in fact, that when anyone searches for it, box vox (Beach Packaging Design’s blog) is what comes up first in search results. Perhaps not the most relevant of keywords for our small branding and package design firm, but, okay, I’ll bite…. Why were so many people searching for more information on Rat Nip?

Was there something in the news about someone being recently poisoned? (See: Poisoning & Product Placement)

Was there something on TV about Rat Nip?

When I searched online for the first week or so, I couldn’t find anything about Rat-Nip being in the news or on television. But then a few days ago the answer finally appeared:  “Boxes of Rat Nip were found in a closed General Store on American Pickers by Frank Fritz this week” (via: What the Trend)

It turns out that Mr. Fritz’s appreciation of some old boxes of Rat Nip provided the comic relief during an episode of American Pickers that aired on January 14th, entitled, The Doctor Is In.

It was the following day that a great many viewers were inexorably led (as if by The Pied Piper) to visit box vox for more information on “rat nip” —you know, since I am the leading authority on the subject.