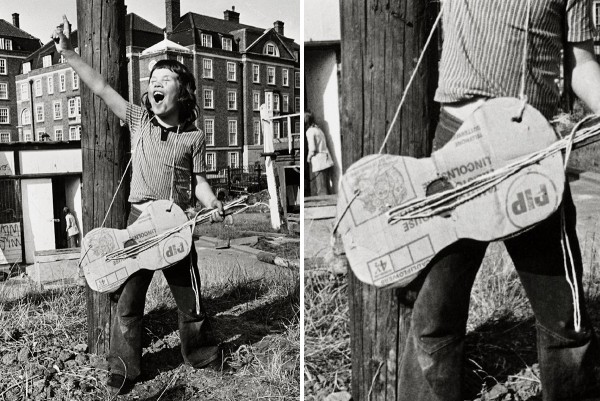 In 2009, when I first wrote about Mick Rock‘s photo of a boy playing with a cardboard guitar in 1972, I had no idea what sort of box it was that had been used to make the Dude’s guitar.

Yesterday, an email from England provided the answer: it was a PIP brand cauliflowers box.

I randomly came across this photo a short time ago and noticed the cardboard used for the guitar is from a box belonging to my family’s farm. The boxes would have been used to take produce to markets across London years ago…

My family’s farm has been on the go for a few generations now but under various names for different purposes. PIP farm produce was run by my grandfather and his brother. ‘Pip’ was actually a nickname given to my grandfathers brother (his name Peter Pearson). This side of the business was market based, we owned lorries that distributed our home grown produce to markets up and down the UK. It was dissolved in 2000 when the supermarkets started to rise and take over. We carried on growing and started to supply them, via larger haulage firms. Thus us selling the lorries etc and that side of the business becoming redundant.

Anyway, farming is my family’s history and I have to say I’m pretty sentimental about this old cardboard box. My dad is also a pretty big fan of Mott the Hoople. And it was only by complete chance we came across this photo. I love it. 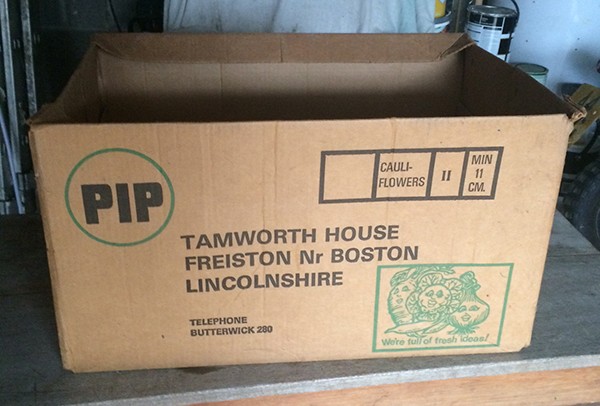 Charlotte’s dad being a Mott the Hoople fan is significant because Mick Rock’s photo —of a boy playing a guitar made from a PIP (Farms Produce) Limited box— was originally earmarked for the cover of Mott the Hoople’s album, All the Young Dudes, produced by David Bowie. Why was it never used for that purpose?

The photo appears in Mick Rock’s book, Glam! An Eyewitness Account with an accompanying caption that seems intentionally vague: “Why it wasn’t used I can’t remember, nor can Ian Hunter, must have been a chemical shift.”

I wrote some unkind things in 2009 about the illustration that preempted the Dude ’72 photo. (If I was overly harsh, it was only because this particular photograph would have made such a great album cover.)

Delving into it a bit deeper, I learned that the illustration I was disparaging in 2009, was the work of musician/artist, George Underwood. The credits on the back of the album attribute “sleeve concept / art direction” to Mick Rock. George Underwood is credited with “colour retouching,” which one might have assumed meant retouching of the photos, but must, instead, refer to Underwood’s cover illustration.

Note: It turns out I have that part mostly all wrong. (Stay tuned for corrections!)

(One more thing after the fold…)

As long as we’re scrutinizing the photo to such a granulated degree, let’s consider the boy’s location. I had speculated that “the kayak must have been for Regent’s Canal since I don’t see any other bodies of water on a map of Camden Town.”

Paige Johnson, however, points out that the boy is actually playing in an early “adventure playground.” In the 1960s a certain type of rough-and-ready creative playground for British youngsters came into fashion.

…the Ampton Street centre with its do-it-yourself towers, ropes, old tyres and cable runs looks scruffy—even in this grim part of Kings Cross. But here is adventure; with these ramshackle structures the kids can create different and exciting games.

By 1972, supervised adventures in that playground were probably waning. None-the-less, The Ampton Street Adventure Playground seems to be where Dude was hanging out that day.