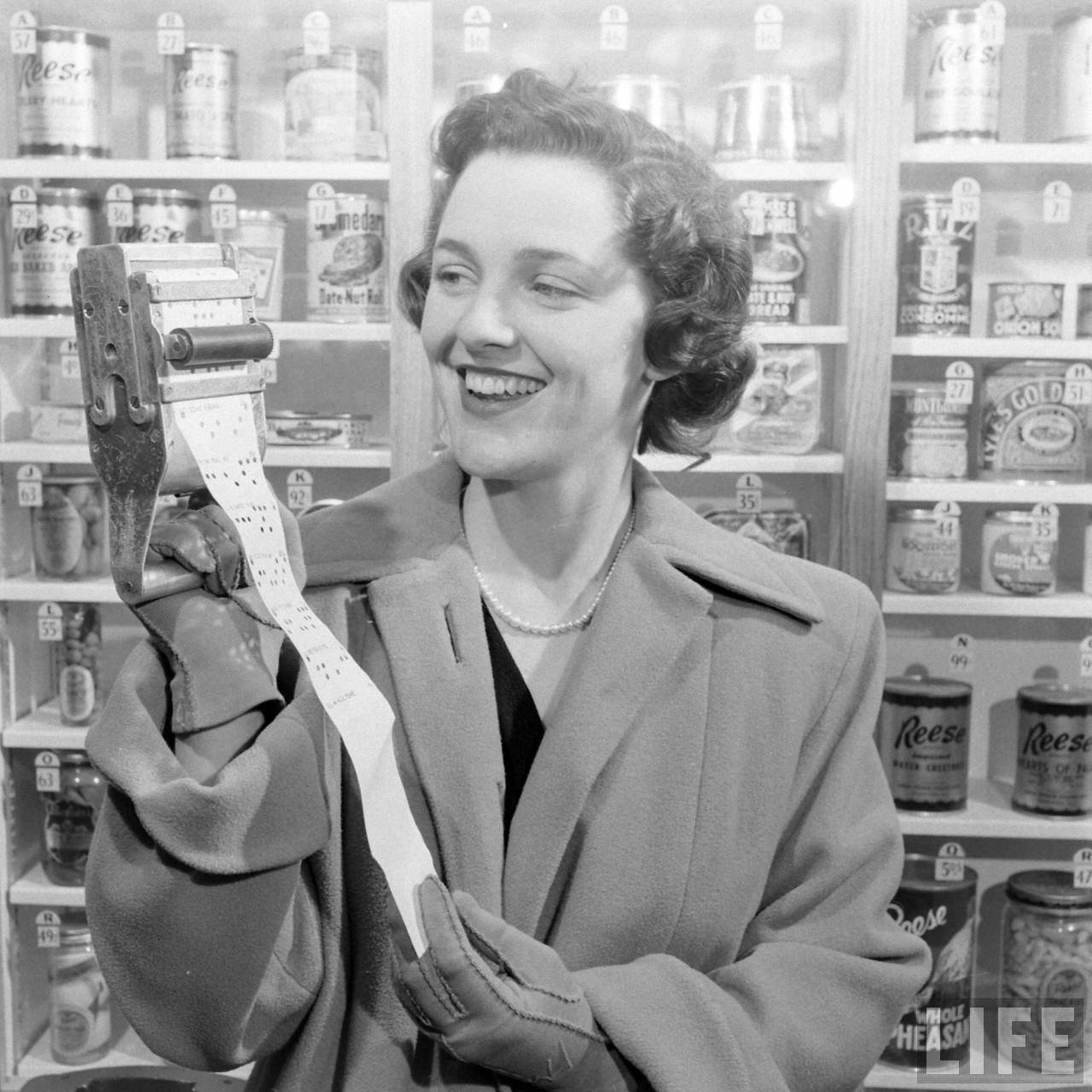 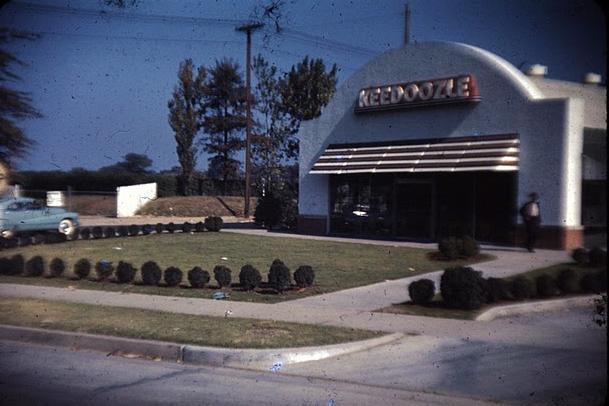 Speaking of Clarence Saunders (as we were last Wednesday) the self-rhyming Piggly Wiggly store was not his only “automatic store.” Even more futuristic were his “Keedoozle” stores.

Keedoozle is almost completely automatic. On entering the customer takes a “key”—an aluminum mechanism that holds a roll of paper tape—to display cases containing samples of all goods sold. For each purchase she puts the key in the slot, presses a button. This records her purchase on the tape by punching a pattern of holes. When her complete order has been punched on the tape, she takes the key to the cashier at the front of the store. In a few seconds Keedoozle’s mechanism delivers the order to the customer, waiting in the pleasant lounge near the door. 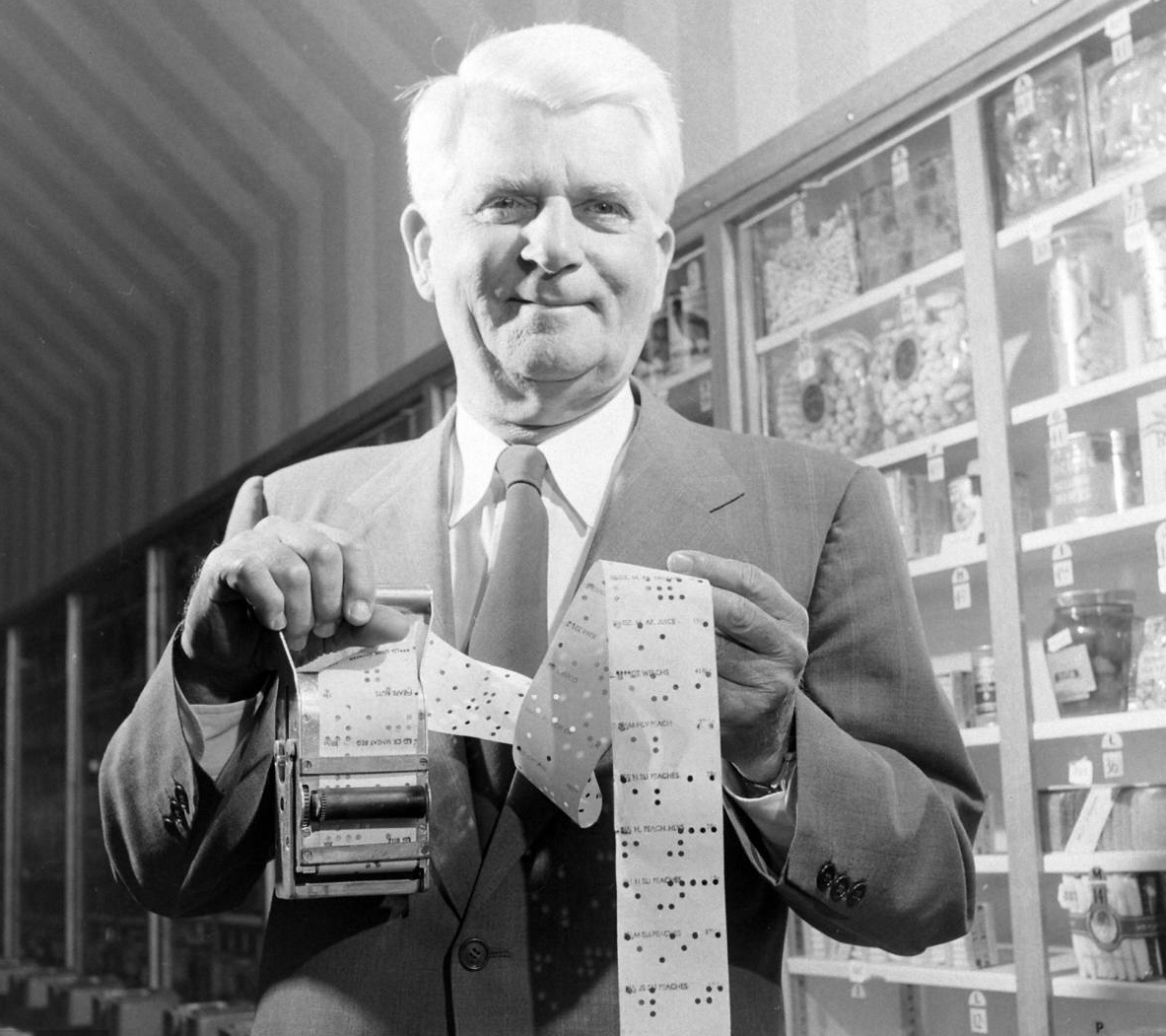 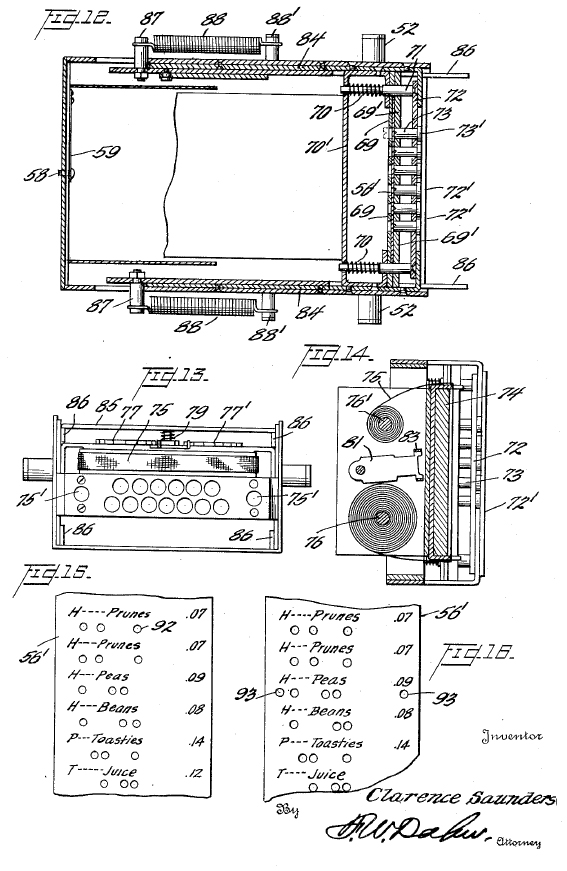 Supposedly the name was based on “key does all,” but in the Life Magazine article, Saunders disputes this…

Saunders, a soft-spoken man who has made and lost two tremendous fortunes, has confided that Keedoozle actually doesn’t mean anything at all.  “I just thought it up out of my noodle,” say Saunders. As a matter of fact, he picked Keedoozle from 100 other names that he also thought up out of his noodle because he felt that it was a word that could not readily be imitated, He has not forgotten that years ago when his famed Piggly Wiggly chain of grocery stores was making millions a rival chain blossomed under the infamous title of Hoggly Woggly. 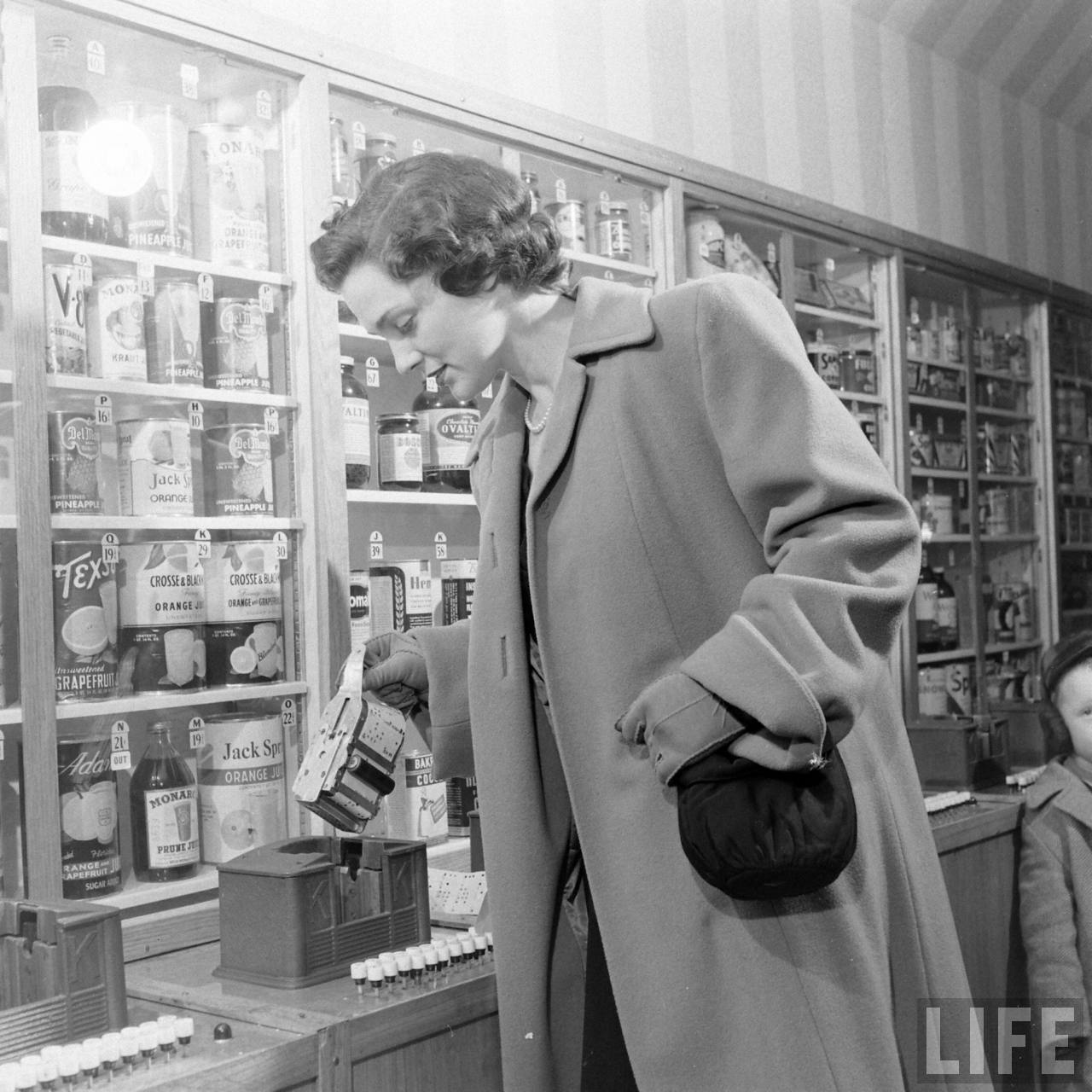 The woman shown shopping in these Life Magazine pictures reminds me so much of Julianne Moore playing her deceptively placid women from the 1950s. (See: “Far From Heaven” or “The Hours”) 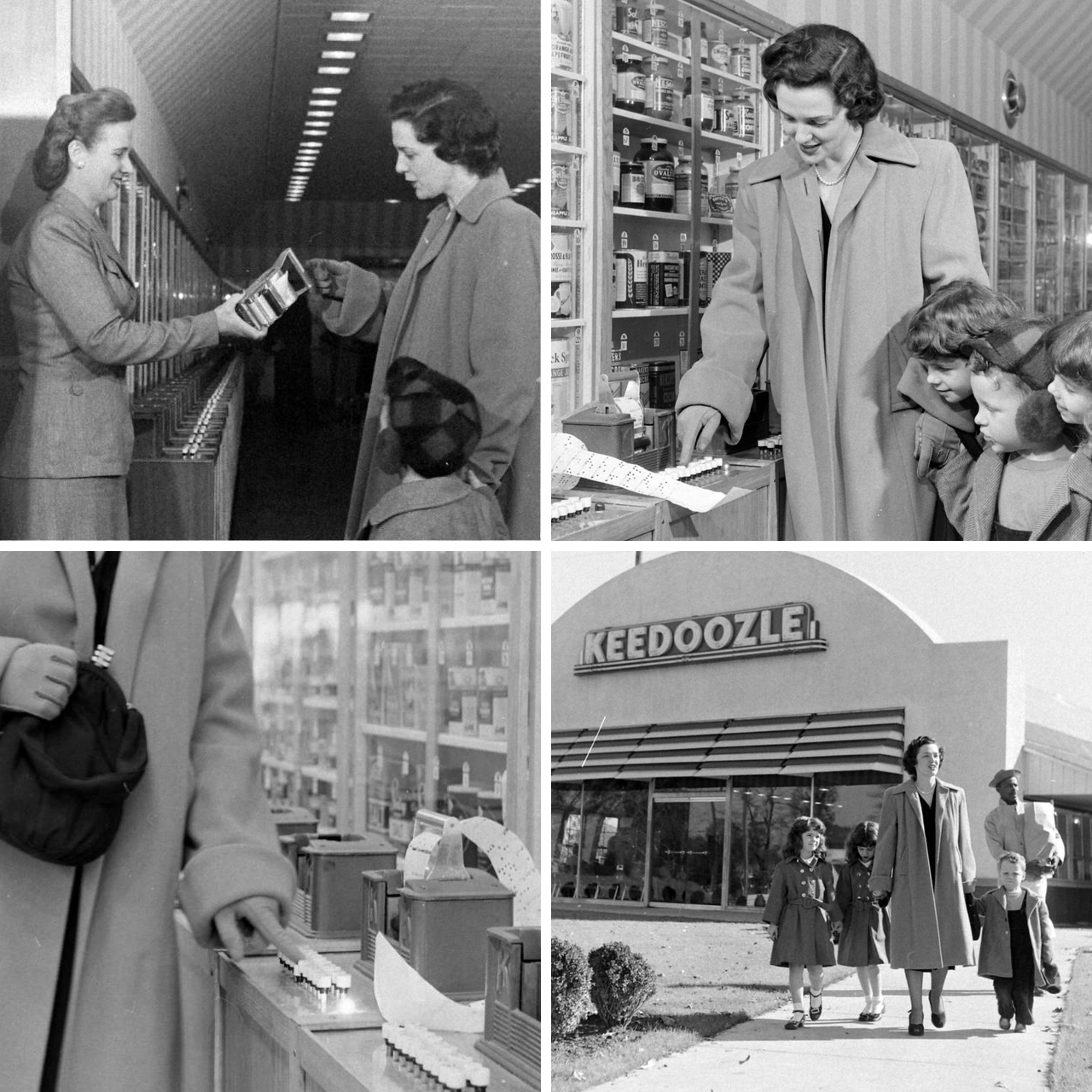 Behind the scenes there was some automation, but also stock boys… 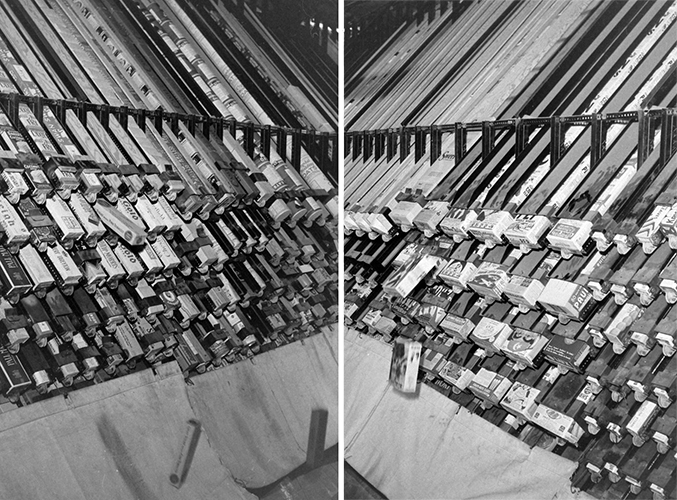 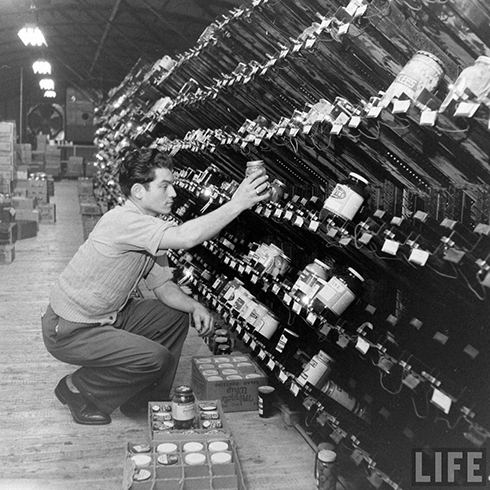 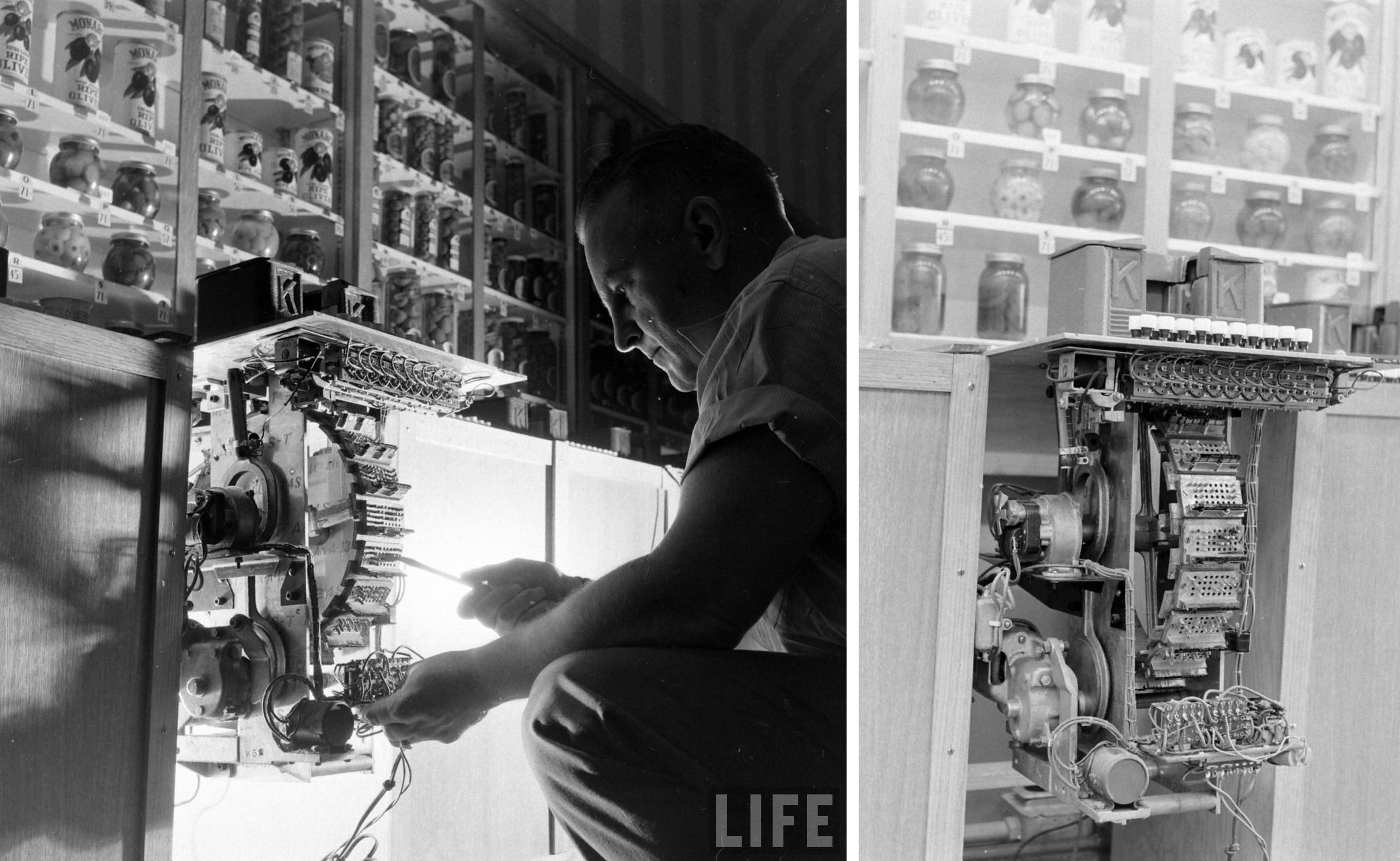 Last month, Saunders’ one and only Keedoozle in Memphis went kerplunk. In eleven months Saunders had lost $170,000. Said he: “Keedoozle was too much for the average mind to comprehend.” Besides attracting too few customers, it cost too much to run the calculators and conveyor belts.

(A few more photos, after the fold…) 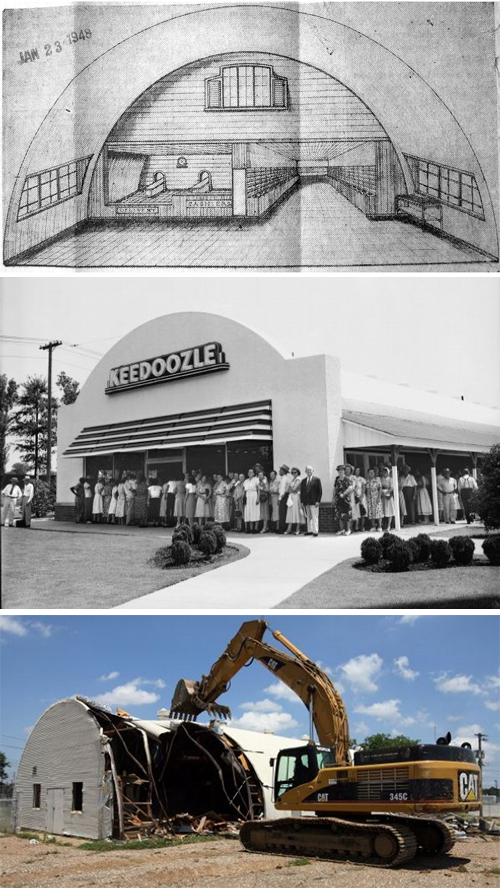 Above, the Keedeezle store made from a Quonset hut: envisioned, realized and eventually demolished. 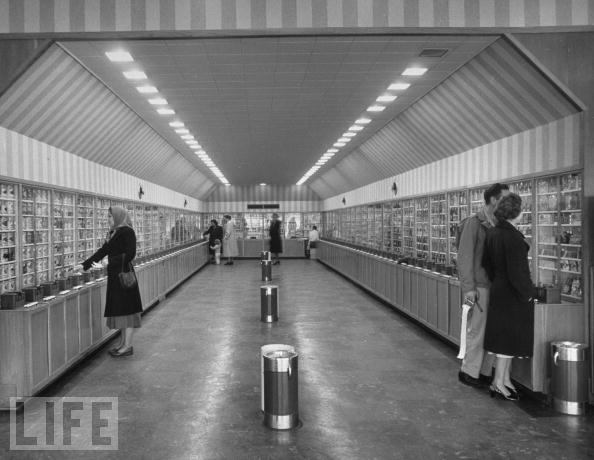 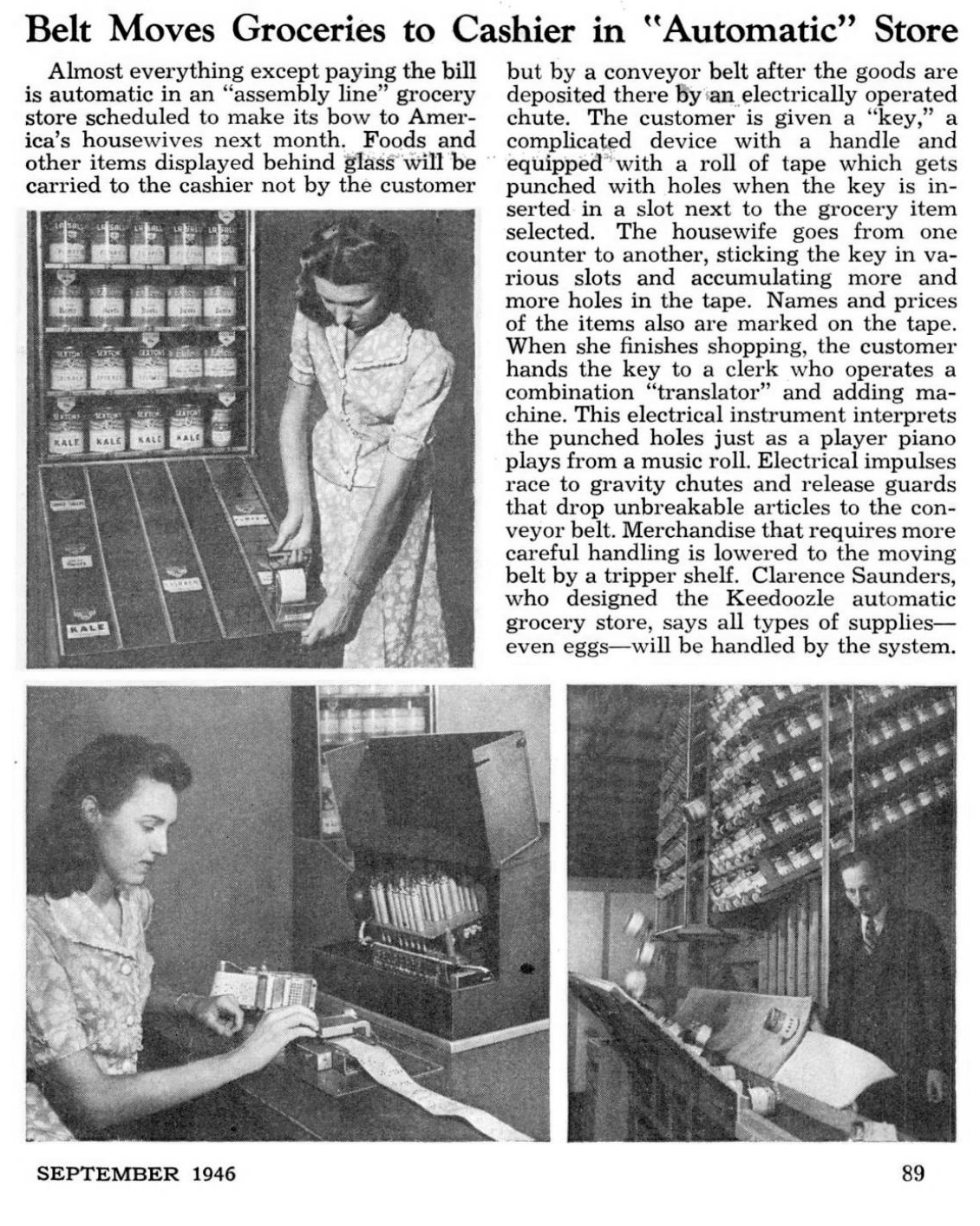 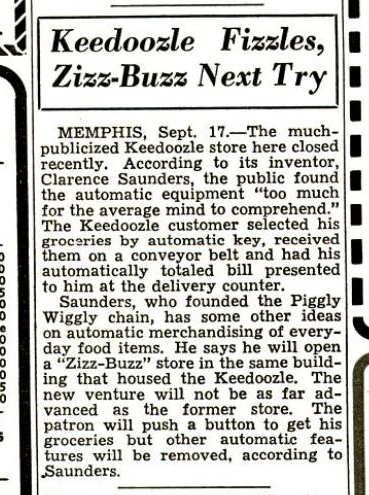 The Billboard magazine article on right cites “Zizz-Buzz,” another planned self-rhyming store that Saunders intended to open, but by the mid 1950s the store he was planning to open was to be named “Foodelectric.”

Just as the hole-punched paper tape of Keedoozle’s “keys” (like “punch cards”) was an early form of computerization, Foodelectric’s planned concept for the customer to “…collect her groceries herself, wrap them and act as her own cashier” also involved rudimentary computing devices. The envisioned function of these devices, however, was pretty much exactly what today’s “self checkout” does.

Saunders, himself, checked out in 1958, before his “Foodelectric” store could be launched.

« BoxVox & Consumer Confusion
Tide at the Dawn of Day-Glo »