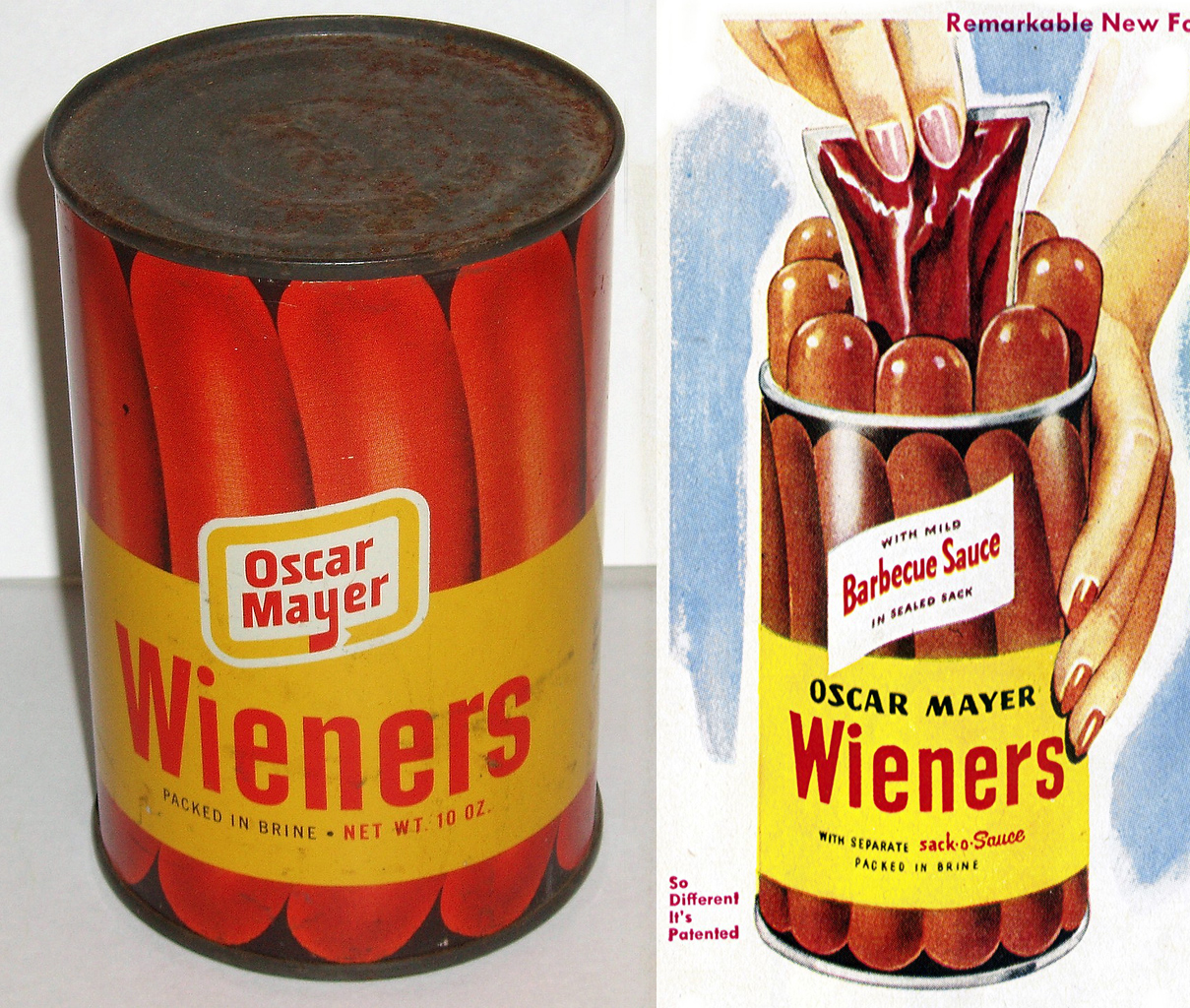 Led to this topic by Dan Goodsell’s rusty can of Oscar Mayer Wieners (on left), it turned out to be a different story than the one I thought I might tell.

At first I was thinking that it would be about orthographic graphic design in canned food labels.

Or maybe I’d compare its label design to the once popular: “Crown Roast of Frankfurters,” and give it an alliterative, Spiro Agnew style title like “Fifties Phalanx of Phallic Franks.” (As Jon Stewart has pointed out about the former Vice President’s name, “Spiro Agnew” is also an anagram for “grow a penis.”)

That was more or less the plan until I read about the later development, pictured on the right…

A new food package, developed by GO Mayer, vice-president of Oscar Mayer & Co., of Madison, Wis., permits two foods of separate and distinct flavors to be packed in the same can without interchange of flavors. This has been utilized in canned wieners by putting a barbecue sauce-filled Pliofilm sack into a can of wieners. Blending of two separate food flavors during the canning process is prevented. Other ready-to-eat food combinations will soon be put up this way. The Pliofilm sack is heat sealed, after which it is air- and watertight and break-proof under normal handling conditions. Housewives can open the sack with scissors or a knife. Sauce and wieners can be heated together, or they can be heated separately and the sauce poured over the wieners.

I knew that Pliofilm had been used in margarine color-packs, but this was news to me.

As wonderful an artifact as it is, Goodsell’s can must have seemed like a plain spinster aunt in comparison to this new and potent marketing mix of canned wieners with a patented sauce packet. Still mentioned in Oscar Mayer magazine ads, the plain brine version was relegated to a footnoted “also ran” status.

The glamorous young “Composite Food Package” was patented by none other than Oscar’s own brother, Gottfried O. Mayer…

Side bar: I’m very happy to see that the patent drawings above include additional orthographic views.

(Advertising, promotion, and modern art, after the fold…) 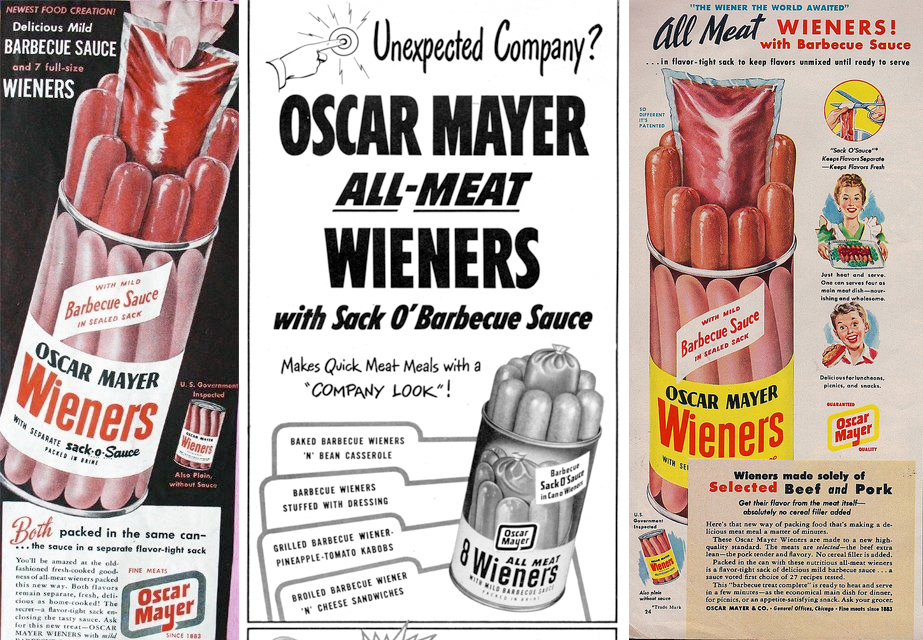 Left: from Like-Retro-Ads; center: from: Found in Mom’s Basement; right: from Cookbook Love 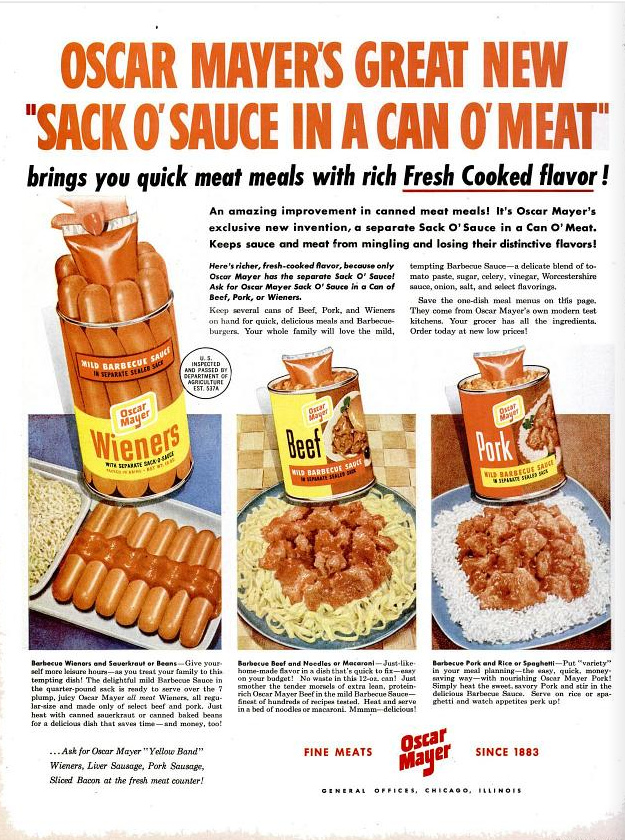 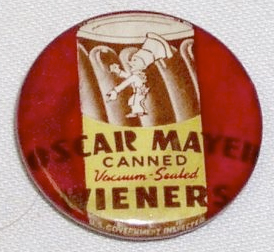 While the “Sack O’Sauce” composite food package version was patented in 1947, judging from this 1931 Oscar Mayer promotional button, the basic “phalanx of franks” design of Oscar Mayer’s canned wieners appears to be much older.

It was the later, enhanced package, however, that really caught the public’s attention and whose cultural prominence was even felt in modern art… 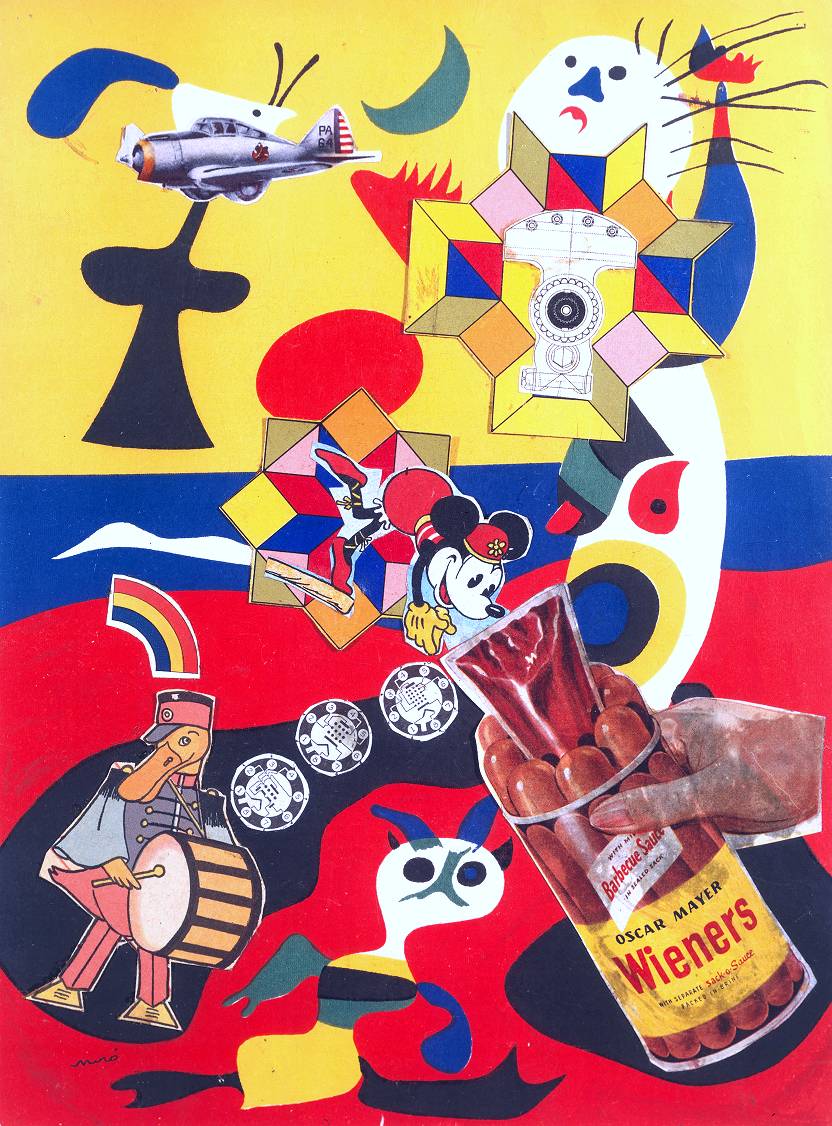 « Package Eats Logo
Can Within a Can »