For day 3 of our “Reynolds Wrap Packaging week” we want to reflect on Reynolds Wrap’s packaging business.

Although they launched their flagship “Reynolds Wrap” brand in 1948, the company started out as a packaging business in 1919.

Hello. I observe. (That means I notice what’s going on.) And, by observing grownups who smoke, I observe that all the leading cigarettes are protected by aluminum foil. Zip. Look at that shiny aluminum foil: Reynolds Wrap Aluminum Packaging.

Companies today, of course, are less apt to crow about their connections to big tobacco. Reynolds Aluminum, however, had connections to tobacco that were both familial and part of its own corporate narrative.

For a time, Reynolds Wrap seemed to go out of their way to highlight their cigarette packaging. They ran the ad below in 1960.

A woman is standing in front of a wide array of abstracted aluminum-packaged product categories. They might have focused on the wide array, but they chose instead to go with tobacco. The headline reads: “How Better Packaging for Cigarettes …Started a Whole New Way of Life!” By 1960, however, most people had already caught on to the fact that cigarettes were more likely to cut life short.

Reynolds Aluminum ran this full-page ad in a 1960 issue of the Courier-Journal (a Louisville, Kentucky newspaper)

Reynolds Wrap made packaging the centerpiece of a lot of its advertising.

And some time around 1953 they designed the “Reynolds Wrap Aluminum Packaging” seal, which began appearing in their advertising. 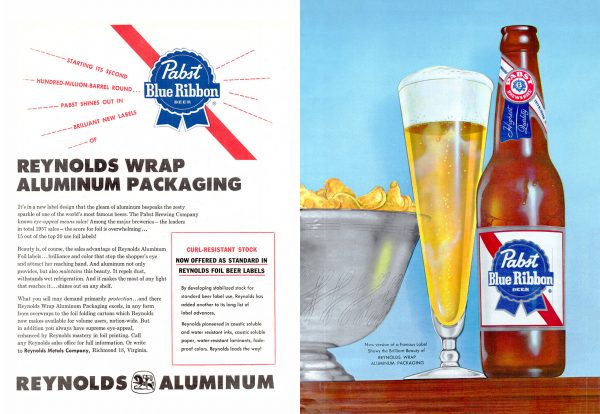 a 2-page Reynolds Wrap Aluminum Packaging ad from a 1958 issue of Modern Packaging (via: Automatic Ephemera) 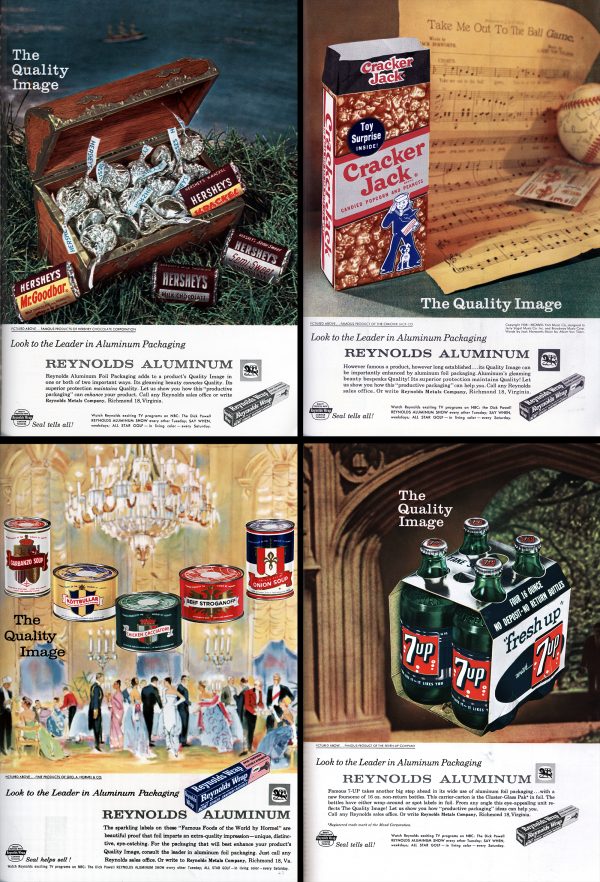 Although Reynolds made a concerted effort to reach manufacturing customers through trade magazines, they didn’t stop there. In fact, they placed many more ads in popular, general interest magazines. Surprisingly, these ads also focused more on their packaging business than on Reynolds Wrap Aluminum Foil. But why would they do that? 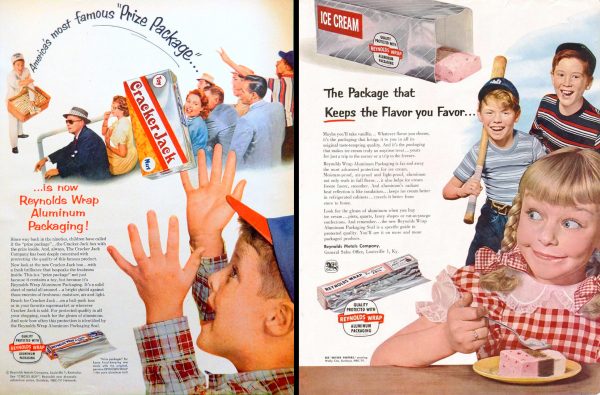 Watch what happens as the Reynolds Wrap Aluminum Packaging Seal appears now on … famous-brand products. Watch as more and more manufacturers climb on the bandwagon. This is the first significant packaging identification in sales history. It applies only to the finest product protection known… aluminum. And it tells its story with the name that best evokes to all women the fresh-keeping power of foil … Reynolds Wrap Aluminum Packaging!

However small on the package, that seal will loom larger and larger in the customer’s eyes… because, to her, it’s a guarantee of protected quality.

…and each package carries the imprint of the new “Reynolds Wrap Seal.” This seal, a variation of the Good Housekeeping Seal, is in the form of a shield in the shape of the Reynolds trademark, and carries the words “Quality Protected with Reynolds Wrap Aluminum Packaging. It is being adopted by a wide range of manufacturers.

“In these days of stiffening competition… a prospect might well be justified to ask our sales people, ‘why should I do business with you — why not with Alcoa? What’s in it for me?’

“Our answer,” says Mr. Kintner, “inevitably is that our television works for them, too. People recognize our seal on the products they buy, will instinctively buy these packages instead of competing brands.”

The company has also profited by promotion of a “quality seal,” an emblem made available to all packager customers for use in advertising and on their containers, that says simply: “Quality protected with Reynolds Wrap aluminum packaging.

Aluminum on the March 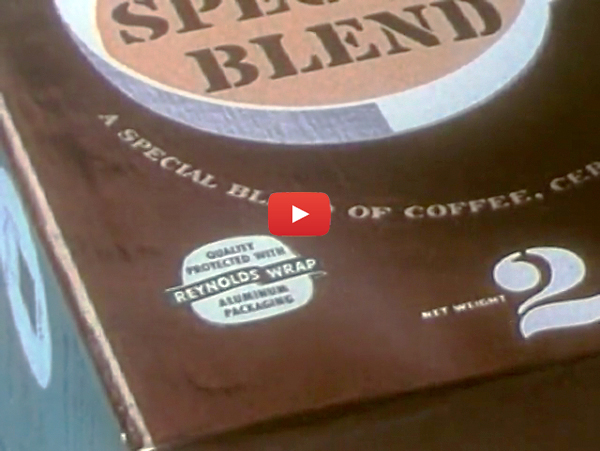 This is an excerpt of “Aluminum on the March” — a 1956 industrial film by The Jam Handy Organization, Inc. with stop-motion sequences by Frank Goldman.