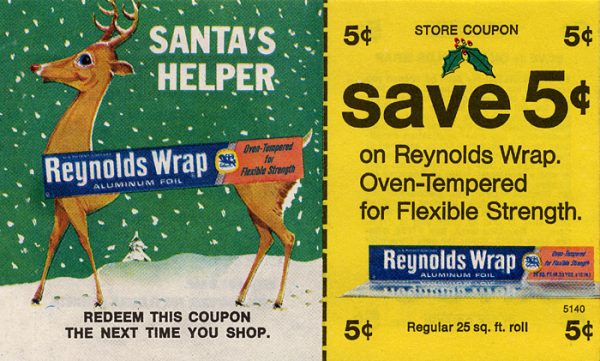 When I saw this illustration online of a Reynolds Wrap reindeer I thought it might be a nice Xmas-related post for day 8 of “Reynolds Wrap Week.” The image originally came from Roadside Pictures. On his Flickr page, he tells us that the date is 1971, but does not identify the publication. 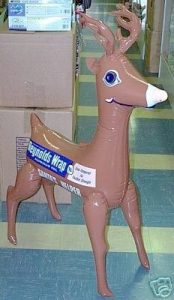 I tried to find other ads featuring “Santa’s Helper” (the Reynolds Wrap reindeer), but could not. I did, however, find this odd, inflatable promotion.

I found the photo on Worthpoint. It originates from a 2007 auction on eBay with the title, “Reynolds Wrap Inflatable Santa’s Helper Reindeer New.”

I assume that the inflatable version ties into the same 1971 campaign as the coupon. The seller appears to have listed the same item multiple times. Either it failed to sell and he kept on trying. Or else he had a number of these inflatable Reynolds Wrap reindeer that he sold in succession.

Although I never found any other examples of the Reynolds Wrap Reindeer, I did find evidence of a larger, zoomorphic campaign that Reynolds was apparently conducting in the early 1970s.

The Reynolds Wrap dog, turkey and hippo each appeared in 1972 newspaper ads. And, as with the reindeer, these ads also included coupons.

Yesterday I promised that I would give you an “End-of-Week Reminder” when our Reynolds Wrap Week was almost over.

Well, here is that reminder: I anticipate just 1 more post after this one. By that time, we will have completed what has tuned out to be a (9-day) “week” long observance of the brand known as Reynolds Wrap®.