For day 2 of Reynolds Wrap Week we have two “awning” promotions.

Searching online, however, I could only find the same 4 photos of this project again and again. Because of this I suspected that it might have been a Photoshop concept, rather than something that they actually produced. Still, if I recollect correctly, there was a lot more “real” stuff online back in 2006 than there is now. And fewer camera phones.

Assuming they’re real, I found the highest res versions of the 4 images on Chuck Pagano‘s website. (He was the copywriter for the campaign.)

Funny thing is, this was not the first marriage of “Reynolds Wrap” and awnings.

Where Saatchi & Saatchi used awnings to promote Reynolds Wrap, Reynolds Metals Company had already done it the other way round. They used boxes of Reynolds Wrap to promote awnings in 1958.

Food supermarkets in 50 major market areas will promote aluminum awnings from March through May, according to Reynolds Metals Co. …

Forty million Reynolds Wrap packages will carry an advertising message for awnings. Sample cartons for the household foil have a panel on which an awning dealer can imprint his message and use the packages as “door opener” gifts during calls to sales prospects.

This month the Reynolds Metals Company will launch the first aluminum awning sales campaign ever conducted in supermarkets. Described by Reynolds as “the greatest sales push ever put behind aluminum awnings,” the campaign will make use of the company’s staff of 175 consumer market salesmen, who will set up displays in supermarkets located in 50 major cities across the country.

As a point-of-purchase sales aid, packages of Reynolds Wrap aluminum foil (normally sold in supermarkets) will carry special advertising messages about the awnings.

(More on awnings, after the fold…) 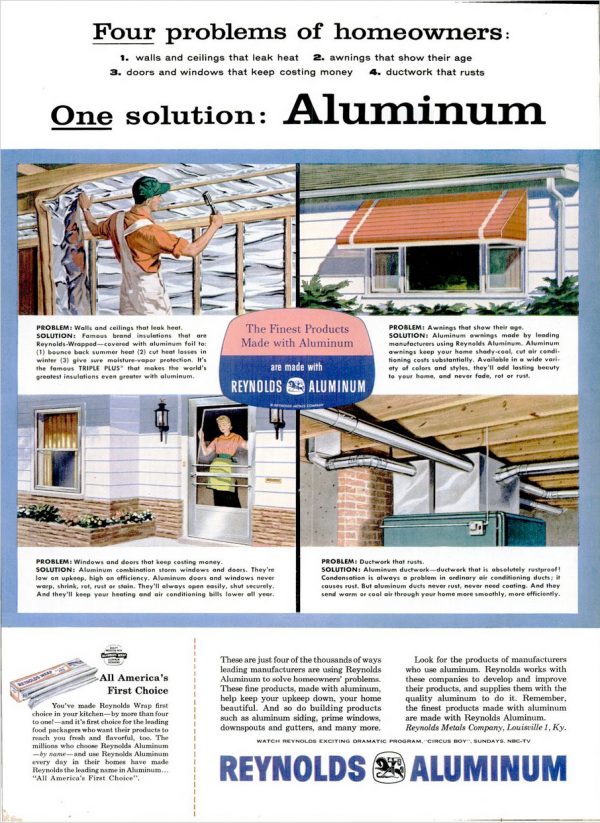 From the 1954 “Reynolds Architectural Aluminum” booklet