The Reynolds Metals Company had originally perfected their methods of printing on aluminum foil for their packaging business. Then later, in the early 1950s, they started printing ads on aluminum foil, as well. Here, they placed a circus-themed trade ad in a 1954 issue of Printer’s Ink magazine. Does anyone know who the illustrator was?

We made the video above because it’s difficult to capture the effect of these ads in a photograph.

Still, I want you to also see the illustrations, so I’ll go ahead and scan the pages. 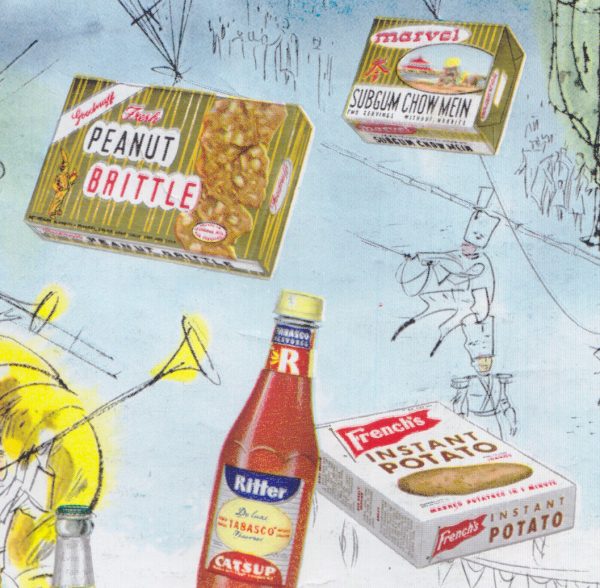 I found this 4-page ad on eBay.

They used an opaque white ink to simulate a white page in some places, and let the reflective foil show through in other places to depict their foil wrapped packaging. They added a layer of transparent inks in some areas to make the foil look gold or blue, etc.

See my scans of the other 3 pages, plus 2 other noteworthy (and apparently newsworthy) ads that Reynolds printed on aluminum foil, after the fold. 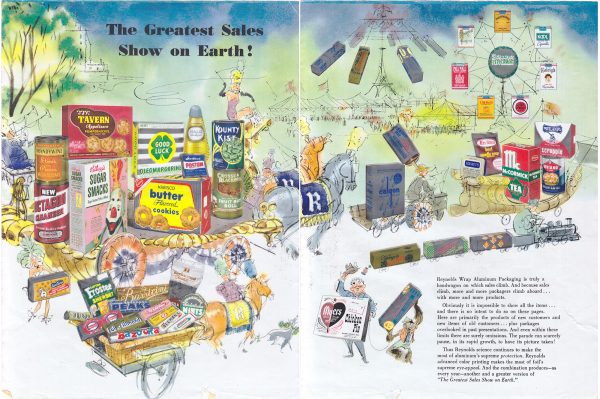 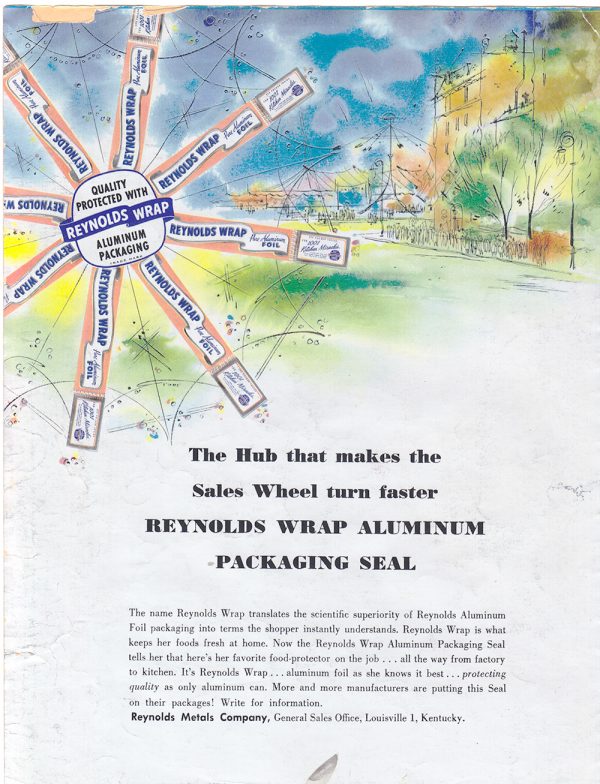 Obviously it is impossible to show all the items… and there is no intent to do so on these pages. Here are primarily the products of new customers and new items of old customers… plus packages overlooked in past presentations. And even within these limits there are surely omissions. The parade can scarcely pause, in its rapid growth, to have its picture taken!

Thus Reynolds science continues to make the most of aluminum’s supreme protection. Reynolds advanced color printing makes the most of foil’s supreme eye-appeal. And the combination produces—as every year—another and a greater version of “the Greatest Show on Earth!”

It would fun to try and track down surviving examples of each of the packages shown in this 4-page ad.

Darian Zam recently told us about a foil wrapped package for Valley Gold Prunes (part of the Auckland Museum’s collection) that just so happens to appear on page 1 of our 4-page Printer’s Ink ad. Or, at least, a gold and red version of this same package.)

But I digress. The subject at hand is their advertising. 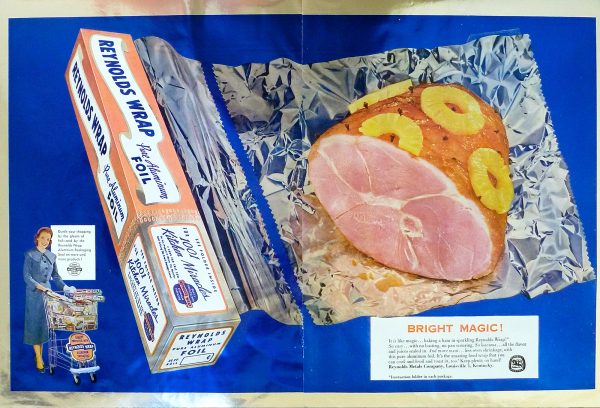 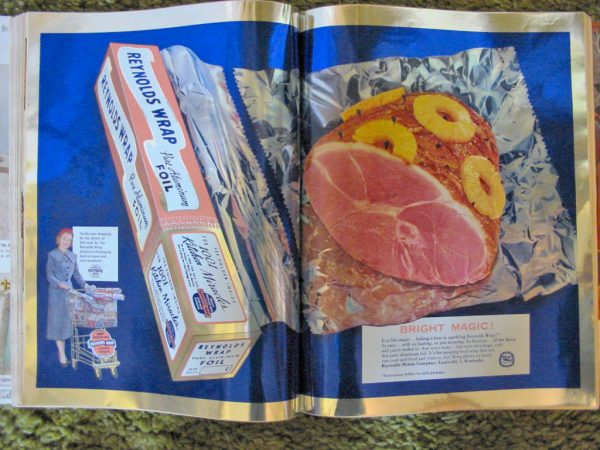 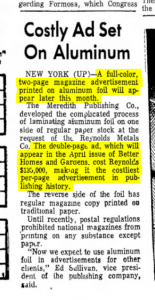 2. “the most costly single ad in publishing history”

In 1955 Reynolds Wrap placed the ad above in Better Homes & Garden.

Conceptually, this ad is a sort of self-portrait, since the aluminum foil backing essentially depicts itself. Which is to say: a piece of aluminum foil.

It was widely touted at the time as the first consumer ad ever printed on aluminum foil. (As opposed to the earlier trade ad(s) printed on foil that Reynolds had done.)

The company sprung its first mass circulation color ad printed on aluminum foil in the April issue of Better Homes & Gardens. The cost: $135,000, which is three to three and one-half times the cost of a regular color ad. But Reynolds expects a readership survey now being made to show a cost-per-reader figure on a favorable basis with a less-expensive regular color ad printed on paper. 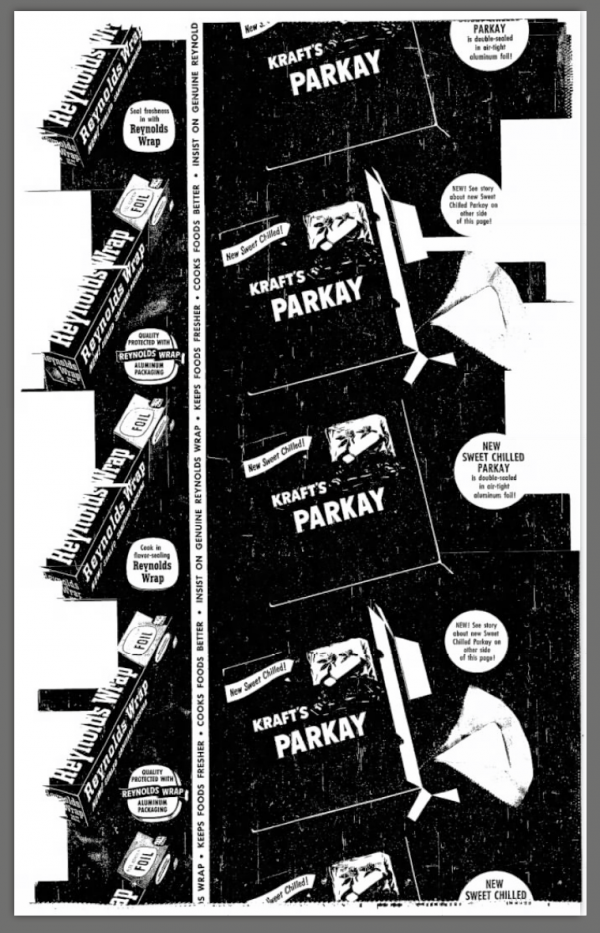 In 1958 Reynolds Metal began to publish a series of color newspaper ads on aluminum foil. The Chicago Tribune ran a number of short articles about the ad you see above. (Although I could only find this black and white image, it was actually a 7-color ad.)

It’s obvious from the vertically-repeating motif that they these ads in long rolls to be quickly cut it into tabloid size pages. And because they set up the information and the photos as a repeating pattern, they could cut pages at any point. Almost any portion of the roll constituted the entire advertisement.

I found some photos of a similar Reynolds Wrap ad (here) with the same kind of repeating pattern.

Getting back to the Chicago Tribune aluminum foil ad, you should take note of the model, shown above (and below) in a “glittering aluminum gown” holding a roll of the printed advertising insert.

Mary Van Nuys was a well-known Chicago model who in 1961 married CBS television executive, Sherman Adler. Then, after they divorced in 1962, she married talent agent, Swifty Lazar. 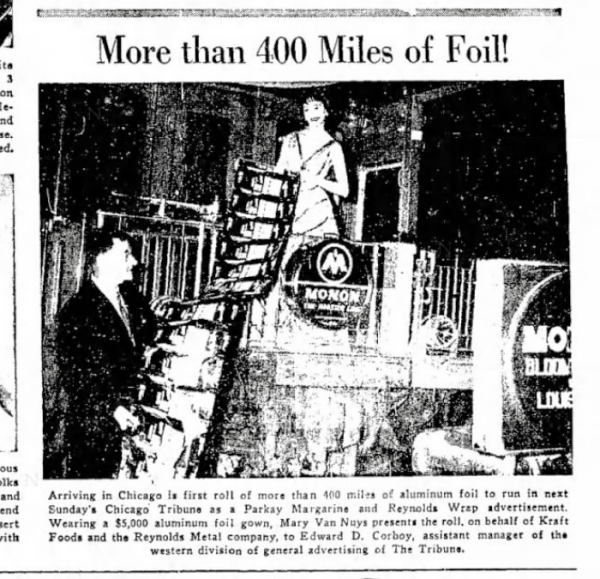 See also: Fluorescent printing (Day-Glo: the brand and Tide at the Dawn of Day-Glo)