Last weekend I was looking at Rob Pruitt’s new coffee-table art-book, “Pop Touched Me: The Art of Rob Pruitt” and struck me that beverage packaging has been a recurring theme in his work for some time now.

1. POLAND SPRING WATER (20 OZ. BOTTLE, $1) The consumer culture that polluted the planet has created an antidote by branding nature. As Coke/Pepsi was to the Pop ’60s generation, bottled water is the lifestyle beverage of the present. A fashion accessory, the simplest elixir, and a symbol of purity, each bottle of water purchased elicits reflection on nature and its fragility.

The Pop Art precedent is pretty explicit here. These boxes are real reminiscent of the famous Brillo boxes. And Pruitt happily stipulates to this important influence.

Almost everything I do I think relates back to ANDY WARHOL, because he’s an artist I discovered when I was really young. My mother had a soup can poster hanging in our kitchen when I was 7, and I would stare at it every morning when I ate my cornflakes. Even back then, I thought, “Boy, this is really funny.”

Rob Pruitt from an interview in Papermag by James Fuentes

Some of Pruitt’s earliest works were collaborative sculptures with Walter Early. Many of these sculptures involved beer cans... 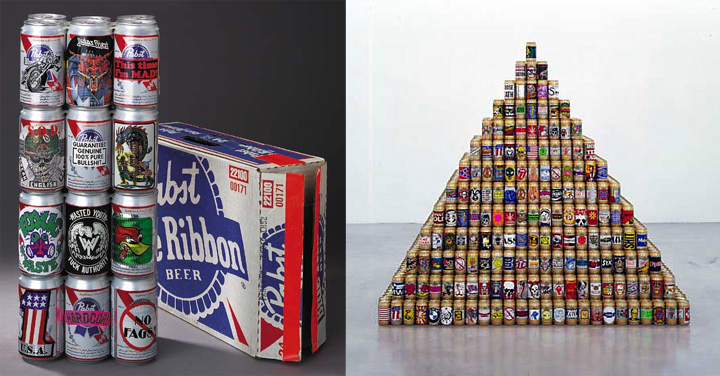 …Artwork for Teenage Boys did involve pretty offensive, sexist, misogynistic expressions of white, male teen­age culture that we’d basically gotten from T-shirt iron-ons and rock music lyrics. That was our first project right out of art school—not that I’m making excuses for it. I thought it was pretty good. We were trying to make a portrait of this segment of the pop­ulation who was the enemy, who harassed us in high school, who beat us up behind the gym. It was an interesting exercise in politics and aesthetics just to gather all of this really vile information and see what it looked like together. I really viewed that project as a portrait of the enemy.

Another of the early Pruitt-Early pieces touched on the idea of using soda cans to disguise alcoholic beverages.

(More about that, after the fold…) 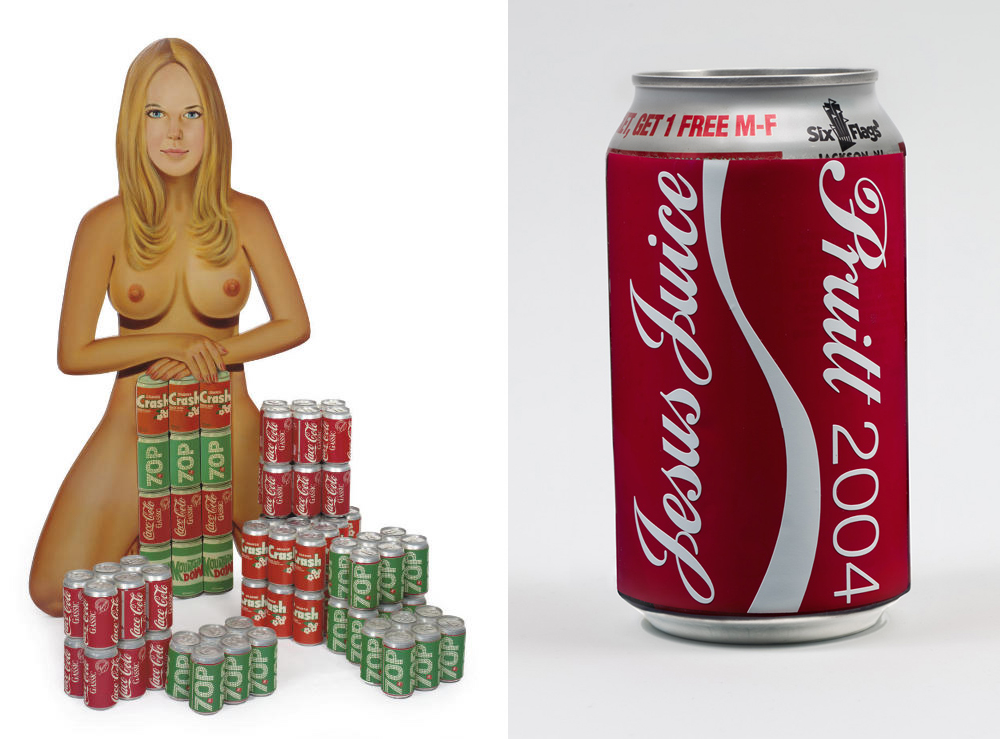 This idea become somewhat notorious during the Michael Jackson sex abuse trial, because of allegations that Jackson liked to drink white wine in Diet Coke cans—(calling it “Jesus Juice”)—and would serve alcohol to underage boys in similarly disguised containers. Pruitt referenced this development directly in his 2004 “Jesus Juice” can above.


An even more recent cultural reference point (for the idea of surreptitiously drinking wine from cans) appears in the “Intervention” episode of “It’s Always Sunny in Philadelphia.” Sample dialog:


Dennis: By the way you guys, can I just say as a side note, I am loving this can-wine thing, I think it’s brilliant. I mean I’m active, I’m gesturing with my hands, and I don’t feel restricted. If I was holding a wine glass right now I’d be spilling wine all over the god damn place. 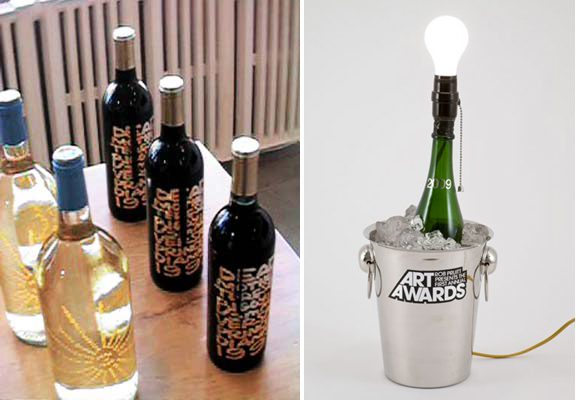 On left: “Dead in the Nineties” wine bottles which conflate their year of vintage with the names of people who happened to die that year. (i.e.: 1997—Mother Teresa, Biggy Smalls, Versace and Princess Diana); on right: the champaign-bucket/bottle-lamp which served as the award for the 2009 Art Awards, which Pruitt hosted.