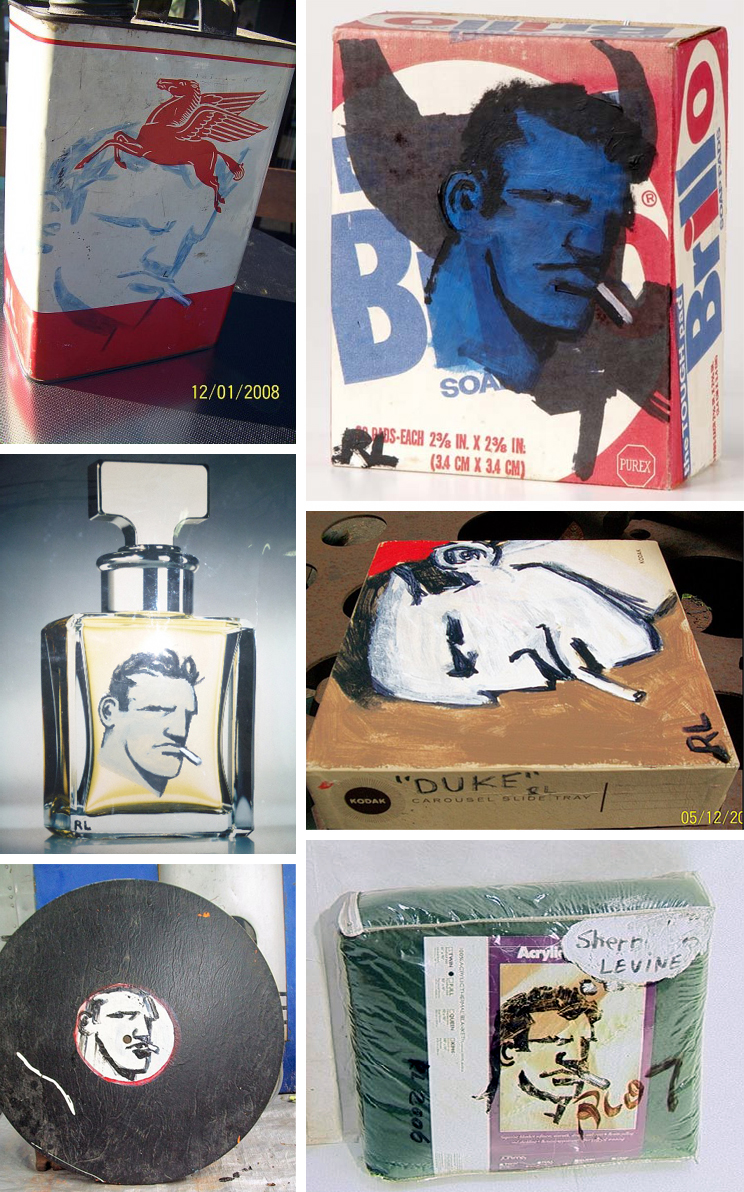 Some package-related artworks by Robert Loughlin. Prolific and single-minded, Loughlin has been painting “the brute” —(his signature squared-jawed smoking man)— on innumerable objects and surfaces since the early 1980s.1  That some of these objects would be packages, only stands to reason. In tagging them with his own de facto logo, Loughlin2 has, in effect re-branded them:

In recent years, Loughlin’s cartoonish, hyper-masculine, smoking “brute” has been featured in The New York Times, Apartment Therapy, Design Boom, etc. While most cite partner, Gary Carlson and his muse and inspiration for “the brute” motif, another important influence may be Leo Burnett’s “Marlboro Man” as the magazine clipping below (from Loughlin’s photo web site) seems to suggest.

Filters at the time were described by Leo Burnett as “sissy”. Real men didn’t smoke filter tipped cigarettes. … Marlboro sold masculinity in 1954 by being the first brand to use “real men” versus the prior models. And what men! They showed football players, cowboys, airplane pilots, and sailors. These were tough, real men… The ads were not just masculine, but were single-mindedly masculine They portrayed manly, rugged men doing manly, rugged jobs.

From Tobacco Documents Online: page 1 of “The Marlboro Success Story,”
a 1985 marketing report made available online as a result of the Master Settlement Agreement 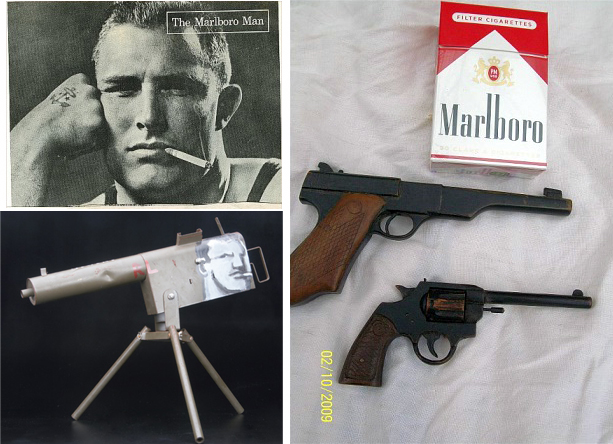 (What is the deal with the guns and the Marlboro pack above? Are the guns little? Or is it an oversized cigarette pack? I don’t know.) The machine gun on the left, is a vintage Tru-matic brand toy machine gun, painted and signed by the artist.

If we were to subject Loughlin, to our Willem de Kooning smoking-and-drinking brand-preferences test, there’s seems to be enough evidence (here and elsewhere) to conclude that Loughlin drinks Budweiser beer and smokes Marlboro cigarettes. (See also: Marlboro Beer) 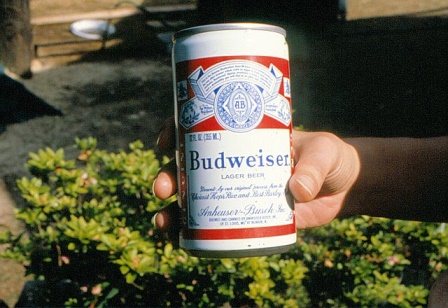 Photo of the hand holding the Budweiser can is from Loughlin’s photo web site, and while I wouldn’t be surprised to learn that he’s subjected some beer cans (and cigarette packs) to his “brutish” rebranding —looking online, I can find no examples of that.

1. Full disclosure: I know (or used to know?) Robert Loughlin & Gary Carlson, personally. In the early 1980s they had an East Village gallery called “The Executive Gallery” and gallery director, Arch Connelly invited Debby —(BEACH partner, Debby Davis)— to have her first one man show there.

2. While, referring to someone by his or her last name may, on the one hand, seem approriately impersonal in the context of journalistic art-writing—it also seems sort of like a gym-class affectation. As if calling Robert by his last name makes me sound tough. (Like first names are for sissies, or something.)

3. The Brillo Box, of course, would also seem to be an attempt to re-brand Warhol—but Loughlin actually has a less competitive connection to Warhol. In the 1980s “Andy Warhol affectionately referred to Robert as the “Chairman” since Robert had sold Andy so many chairs for his factory.”