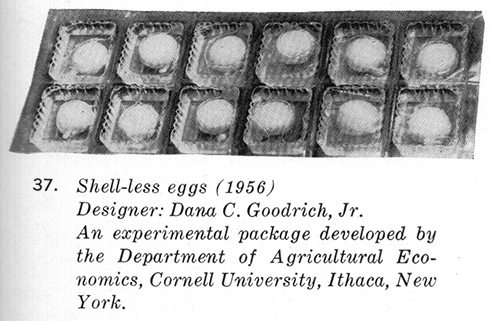 The photo and caption above come from a 1959 Museum of Modern Art catalog for an exhibition entitled “The Package.”

This particular packaging innovation struck me funny, since the egg is one of those natural containers, so often cited as “the perfect package.”

Eggshells are fragile, however, and it was apparently Dana C. Goodrich Jr.’s idea that packaged eggs might be better protected from breakage if one simply removed the shells.

¶ Shell-less eggs, machine-sealed in tough, transparent polyethylene (produced by Sani-Shell Container Corp.). The eggs can be opened by pull tabs like those on cigarette packs, or they can be boiled right in their polyethylene shells. Scientists at Cornell University, who developed the idea, expect it to save farmers millions of dollars by making cracked eggs as salable as whole ones, and by eliminating breakage in shipment.

I’m not sure why it is that Dana C. Goodrich Jr. was credited as the designer of the package, while Lawrence B. Darrah appears to have held the patent below. Both were professors at Cornell. 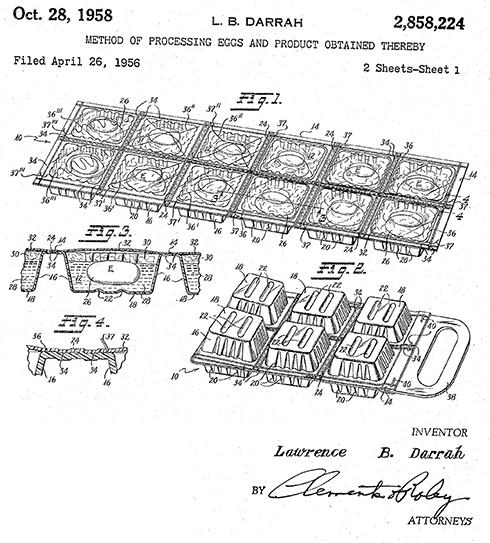 Test-marketed in the college town of Ithaca, the new shell-less eggs received considerable press coverage, but did not ultimately catch on.

A method was developed for packaging individual broken-out eggs in transparent polyethylene containers. These shell-less eggs were visible to prospective consumers and could be cooked in and eaten directly from the unbreakable packages. However, a simplified opening device was not developed until after market testing. Tests on the holding quality of shell-less eggs indicated that: (1) there was an immediate quality loss as a result of handling during the packaging process; (2) shell-less eggs did not maintain satisfactory quality when held unrefrigerated;  (3) air cells in the shell-less egg package apparently had a detrimental effect on quality retention; and (4) refrigerated shell eggs maintained quality only slightly better than refrigerated shell-less eggs. The carbon dioxide permeability of polyethylene may have limited more favorable results with shell-less eggs.

An eight-member taste panel detected no significant differences in odor and flavor between shell and shell-less eggs stored at various temperatures. One-third of the homemakers in three upstate New York cities who sampled shell-less eggs found the packages difficult to open. Over 60 percent claimed they would buy shell-less eggs at the same price as comparable shell eggs. Shell-less eggs were sold in three Ithaca, New York, supermarkets at two cents per dozen less than comparable shell eggs. During the initial two weeks the new product accounted for slightly over 47 percent of total egg sales in the first store. Curiosity buying probably was influential. The comparable figure for all stores during the fifth week averaged about 16 percent.

For more of man’s vanity with regards to eggs, see: Long Eggs and Square Eggs.

« Human thoughts in package design
Bowtie-shaped can as trademark »