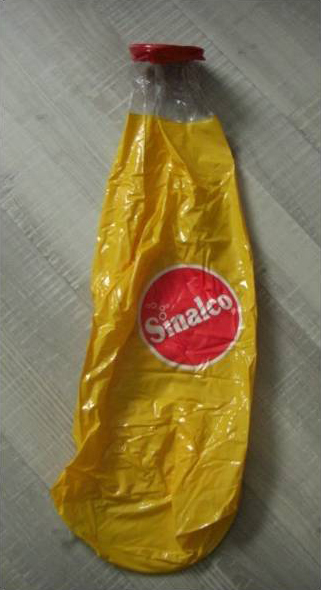 When I first saw this image online, I thought it was some new type of super-lightweighted plastic bottle.

Lightweighting, after all, is one of various sustainable packaging approaches. Make the package lighter and you reduce the energy needed to transport it.

Researching it further, however, I soon realized that it was nothing of the kind. (Although Sinalco has produced some conventional “lightweighted” bottles.)

This was lightweight, to be sure, but it wasn’t an empty beverage bottle. It was a deflated inflatable—an oversized, bottle-shaped promotional item. (Move your mouse over the photo, and it should hopefully change to another photo showing the fully inflated Sinalco promotion.)

I traced the deflated bottle photo to an apparently unsold item on Delcampe.

I found the inflated Sinalco Aufblasbare Flasche image on eBay. The seller there writes:

I dissolve my long-standing collection :-(

My sizes are actual sizes and not “measured flat” !!! The size shows the mark on the scale.

More about “lightweighting,” the Sinalco brand and its packaging, after the fold…

The concept is called “lightweighting” by the packaging industry (in a particularly striking example of verbifying a noun or adjective). Lightweighting reduces the cost of production, the energy required for shipping, and the mass of plastic in landfills.

Bottled and Sold: The Story Behind Our Obsession with Bottled Water, Peter H. Gleick

“Lightweighting” as a verb, has been around for a long time. Sportswriters in the 1800s would occasionally use it in reference to the “lightweight” boxing weight class.

Our combative President Trump often uses “lightweight” as a term of derision. I assume he’s thinking that “heavyweights” pack more of a punch—physically, intellectually, politically.

And yet, I’ve read that he’s been recently fudging his height upwards by an inch or two, in order to dodge a body mass calculation of “morbidly obese.” (See: “Girthers“) So, in this area, Trump does not want to be seen as a heavyweight, and is therefore lightweighting. But, I digress.

German scientist Friedrich Eduard Bilz invented the beverage in 1902. Partnering with Getränkefachmann (“beverage specialist”?) Franz Hartmann, they used an early form of crowdsourcing to come up with a trademark-able brand name. That is, in 1905 they held a contest and chose “Sinalco” — an abbreviation of the Latin sine alcohole (without alcohol). It’s weird that the product’s brand name focuses on what the product is not—an alcoholic beverage. I guess non-alcoholic beverages were such a rarity in the early 1900s, that this turned out to be an effective point of differentiation.

The inflatable appears to replicate the Sinalco bottle redesigned in 2000.

The cult brand gives its bottle shape a new look. The bottle gets a face lift, suitable to the new millennium, and will be launched now worldwide in this updated shape.

The Sinalco brand was also featured in the title of a 2005 exhibition at the Wein Museum:

… the increasing importance of branded products and promotional offers in the advertisement, the competition between domestic and foreign products (for example: “Kracherl” [a fizzy Austrian lemonade] versus “Amerikawasser” Coca Cola or the German soft drink Sinalco) … dealing with lack on the one hand and with abundance on the other. The focus is on the food and consumer history of the city of Vienna.